Deer rifle love affair: With so many choices, why have just one? 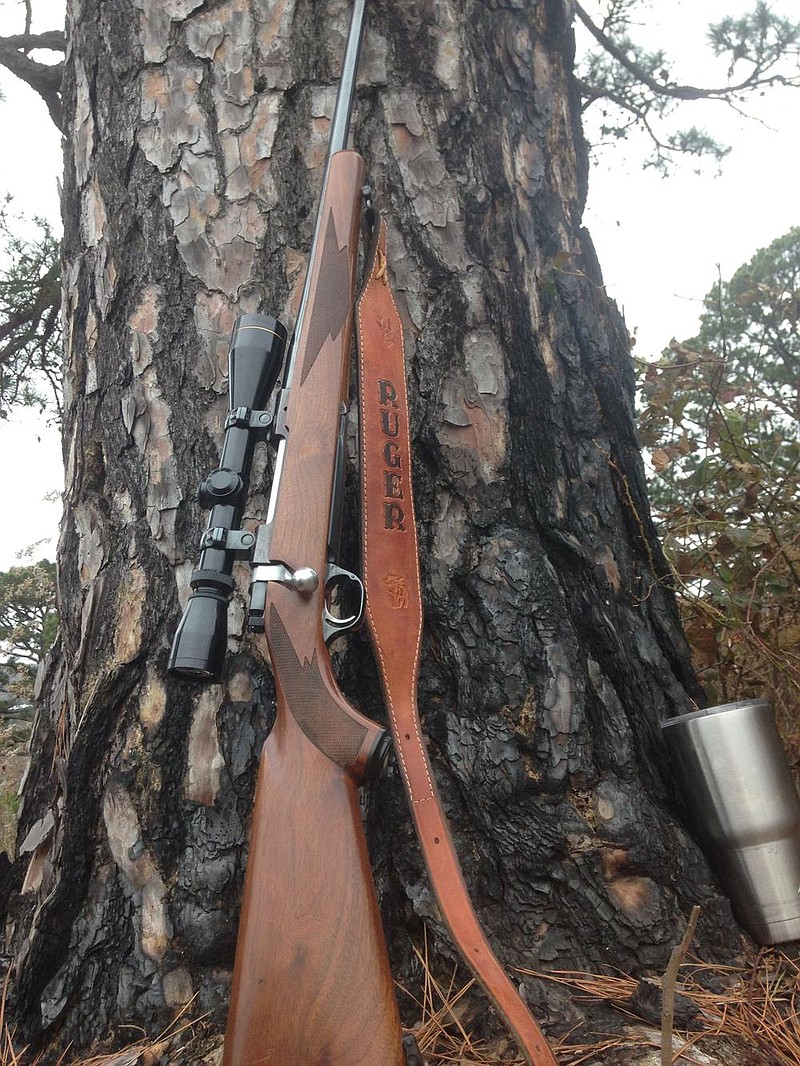 Arkansas Democrat-Gazette/Bryan Hendricks With his trusty Ruger, the author stood beside this tree for days with only hot coffee to take the edge off the colds wind. A deer rewarded his patience in the waning minutes of the hunt.

I love only one woman, but I love a lot of different rifles.

Blonds, brunettes, long ones, short ones, gentle ones and temperamental ones ... I love them all because to me, a hunting rifle is art, the ultimate union of form and function.

My lifelong love affair of rifles began as a child with the .30-06. My dad had a Remington 740 semi-auto, and like many men from the World War II generation, he acknowledged no other cartridge. His taste for other luxuries was extravagant, but that was the only rifle he ever owned.

My father-in-law was the same way. He served in the Pacific Theater. He believed the .30-06 was the Tyrannosaurus Rex of all cartridges. The day I proved to him that the .308 Winchester shoots the same bullet as the .06, at roughly the same velocity, was like telling a little kid that there is no Santa Claus. He never spoke of such things with me again.

Who knows why hunters bond with certain cartridges? Maybe it's the way the numbers roll off the tongue. Say it out loud, "Three-Oh-Eight." Swoon! My first one was a Winchester Model 70 Classic Stainless Featherweight with an auburn finish that glows in the soft light of a southern November morning. It's wicked accurate with 150-gr. Hornady Spire Points or Sierra GameKings powered by 45 grains of IMR 4064, and at 300 yards, it drops deer like an NFL linebacker hitting a Pop Warner running back.

Why? Because the aught-six is distinctively American, born in war and proven afield. I have two. One is a Winchester Model 70 Classic Super Grade. The other is a 1967 Grade II Browning BAR, a first-year production model. I hunt with that one, and it's very accurate with 150-gr. Hornady Boattail Spire Points powered by 56.5 grains of IMR-4350.

I love the old BAR's clean, angular lines, its weight, the way it feels in my hands and the way it jumps to my shoulder. On still, cold mornings, I pass time admiring the straight, tight grain of the walnut through the blond finish and marvel at the impressionistic engravings of the deer and pronghorn heads on the receiver.

Somewhere along the line I fell in love with the 7mm-08, the .308's attractive little sister. Mine is a Remington Model 700 BDL, a rifle that must have been designed especially for me. I worked up a half-inch load at 100 yards featuring a 130-gr. Speer soft point powered by 41 grains of 4064.

I've never killed a single deer with that combination. I've always killed them in multiples. The most memorable day was a two-day antlerless hunt in Missouri's Chariton County in 2004. A herd of does wandered into my wooded stream bottom, and I killed four in about 30 seconds. In 2009, it took two more with the same charge pushing 130-gr. Barnes Triple Shocks.

Like the .308, a good 7mm-08 hunting round leaves the muzzle at a speed of about 2,500-2,700 feet per second. Consequently, and because of its light recoil, some dismiss the 7-08 as a good choice for kids or women. That's true to the extent that a light-kicking cartridge is easy to shoot accurately, which makes it suitable for any hunter who values quick, humane kills. But would you trust it to kill the monster buck of a lifetime? Doug Speight of Greenbrier killed a bighorn ram in New Mexico with a 7mm-08 in 2010 that scored 1811/8 and weighed 400 pounds.

Thanks to the 6.5 Creedmoor, the ancient 6.5x55 Swedish is back in vogue. One entered my arsenal in 2007. With a Leupold VariX-II 3-9X40 scope, it shoots under an inch with factory ammo, 140-gr. Remington Core-Lokts. It's a classic combination that has killed a lot of deer and hogs. My two longest kills exceeded 300 yards.

Like most domestic ammo makers, Remington loads its 6.5x55 ammo mild in deference to old military surplus Mausers in circulation. This keeps chamber pressures low and reduces the chance of damaging antique actions. The muzzle velocity of this ammo is about 2,500 fps. I jazz them up with heavy charges of IMR-4831 and IMR-4064 to boost Core-Lokts and 140-gr. Sierra GameKings very accurately to muzzle velocities near 2,700 fps.

Of course, my Swede was lonely without its big sister, the 7x57. Another European classic, the 7x57 is ballistically similar to the 7mm-08. Mine is a Winchester Model 70 Featherweight that loves 139-gr. PPU from the Czech Republic.

I've always had a soft spot for lever-action rifles, especially when hunting in hardwood timber where shots are limited to less than 100 yards. My favorite is the Marlin Model 336C in .35 Rem. I like the Marlin's beefier design, and it feels better in my hands. The .35 has a little more punch than the .30-30, but for woodland hunting, the difference is negligible. I like the .35 because it's different.

Most published loads for the .35 Rem. feature a 180- or 220-gr. slug, but I redefined the .35 by loading 158-gr. Hornady HP/XTP hollow points in front of 36.5 grains of Reloder 7. That's a pistol bullet designed for .357 Magnum, but in this configuration, it screams. It kicks light, it's accurate, and the rounds hit like wrecking balls. It's also a lot more fun to shoot than the tank-buster loads.

Even more remarkable was my Marlin 375, a beefed up 336 chambered for the .375 Winchester. Mine was unique because it has a stainless barrel and receiver, with top shelf wood. It kicks lighter than a full-house .35 Rem. load, and it's amazingly accurate at reasonable ranges.

For obscurity, the .264 Winchester Magnum is peerless. Several years ago, Remington released a limited run of its Model 700 CDL in .264 Win. Mag. Mine is blued, with a 26-inch fluted barrel. In my world, where big 7mm and 30-calibers reign, it always draws a crowd wherever it appears. Theatrics are important. Pull the stock out of the case and jiggle it a few times to suggest something big and unyielding inside. Then, pull it out very slowly. That 26-inch barrel seems to take forever to clear, and eyes widen the longer it takes. What can I say? Size does matter.

In recent years I have become very fond of the 25-06. It's a 30-06 case necked down to take a .257-inch bullet. It's lightning fast, laser accurate and extremely lethal for deer. I have two, both Browning A-Bolt II. One is the Stalker version and the other is the handsome Medallion model. I killed my biggest buck with the Stalker in Louisiana in 2018.

People often ask me which rifle I would choose if I could have only one. That's a question I can't answer. I'm in love with whichever one I'm holding at the time.