Effort underway to get front line to take vaccine

Medics show some hesitance by CHRISTOPHER ROWLAND THE WASHINGTON POST | November 22, 2020 at 4:39 a.m. 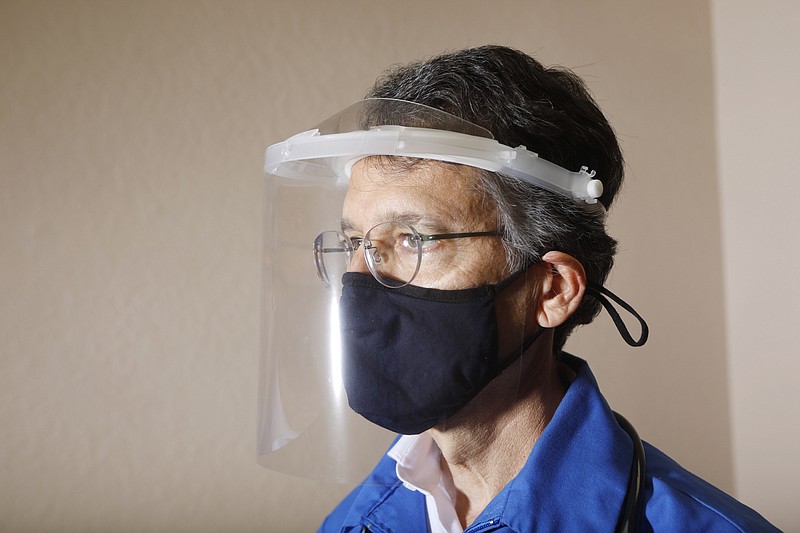 Jeffrey A. Hirschfield, a pediatrician in St. Petersburg, Fla., has shared his reservations about a coronavirus vaccine on Twitter. "It typically takes five to 10 years to successfully develop and vet vaccine candidates, especially those relying on new technologies," he said. MUST CREDIT: photo for The Washington Post by Octavio Jones.

Doctors and nurses, coping with the daily risk of coronavirus exposure, are expected to get top priority to receive vaccines that could become available as soon as next month. But it's an open question how many will seize their place at the front of the line.

Large health systems, medical societies and the federal government are starting an effort to persuade front-line health care providers to take novel vaccines that were developed, and are likely to be granted emergency approval, in record time.

In Boston, major teaching hospitals are rolling out educational videos aimed at assuring medics the process of developing coronavirus vaccines will result in safe and effective shots. At New York's Mount Sinai Health System, a leading infectious-disease doctor said he probably will distribute photos of himself getting a shot in a bid to build confidence in front-line workers.

Hospitals in urban areas are taking additional measures to make sure ethnic and racial minority members, who form a large percentage of their front-line nursing and support staffs, receive rapid information about the safety and effectiveness of the new vaccines.

Winning buy-in from doctors and nurses is crucial to gaining broader public support for the vaccines, based on the high degree of trust placed in them by patients. The hesitancy of some health care workers is attracting attention as the first two vaccines, from Pfizer and Moderna, near deployment. Pfizer and its partner, BioNTech, filed their Food and Drug Administration application for emergency use on Friday.

Polling last month showed that 58% of U.S. adults were willing to get vaccinated against the coronavirus. A Pew Research Center poll in September found 51% of Americans said they would definitely or probably get a vaccine.

Medical experts said attitudes among doctors, nurses and the public could shift quickly as new data is revealed. But government, academic, and health care officials say that significant numbers of providers want more data about the vaccine before it is deployed. Some of the information is expected to be released next month by the FDA.

A report released Thursday by University of California Los Angeles researchers said 66% of Los Angeles health care workers who responded to an online questionnaire said they would delay taking a vaccine. The American Nurses Association, a national union, said one-third of its members do not intend to take the vaccine and another third are undecided.

New Jersey said last week that its data showed 66% of the state's doctors planned to get the vaccine. Among professionals contacted by the state, "some did not want to be in the first round, so they could wait and see if there are potential side effects," New Jersey Health Commissioner Judith Persichilli said at a Nov. 9 news briefing.

The hesitancy among doctors and nurses is not the same as the anti-vaccine movement, which medical experts consider a fringe trend fueled by misinformation and conspiracy theories on social media. Health professionals tend to be advocates of vaccines, including seasonal flu shots, shingles vaccines, and childhood inoculations for measles, mumps and rubella.

But in the case of coronavirus shots, health care leaders say President Donald Trump's frequent promises about vaccines have raised doubts about the objectivity of agency reviews, as have the speed of the manufacturers' clinical trials, and unfamiliarity with the novel techniques used by the Pfizer and Moderna vaccines to trigger natural antibodies.

"We are vaccines' greatest champions, but this is the first time that a new vaccine has been developed at a rapid pace in the middle of a pandemic, as opposed to a much longer timeline," said Susan Bailey, a physician in Fort Worth and president of the American Medical Association.

"What I hear from physicians is some of the same concerns that are expressed by everyone. They worry the process has been politicized. They are concerned because they haven't see any published data yet. And they don't feel comfortable making the decision one way or another until they see the evidence," Bailey said.

Medical professionals are "the most trusted source for health information," the Centers for Disease Control and Prevention said last month during a meeting to discuss national distribution plans. "Concerns among health-care providers is a risk for overall vaccine confidence." The CDC did not respond to a request for comment.

After the fastest development ever, the FDA could grant emergency authorization for the two vaccines as soon as December. That would begin an immediate push to vaccinate 20 million people before the end of the year and hundreds of millions in 2021.

Health professionals must quickly learn the science behind a pair of vaccines that work differently from traditional vaccines and will need to help convince the public that they are safe and effective, said Howard Koh, a professor at the Harvard T.H. Chan School of Public Health and a U.S. assistant secretary of health during the Obama administration.

"A doctor who can't commit to a vaccine personally may find it difficult, if not impossible, to advise their patients to do so," he said.

"Operation Warp Speed -- just that name connotes urgency and timeliness, but could bring to mind for many a fear of the process being rushed," Koh said. "And we have seen the administration contradicting their own top public health officials and trying to accelerate a process that we know has to be done with all deliberate speed."

Pfizer and Moderna have provided data from their large-scale Phase 3 trials only in news releases, which contained the highly promising news that both vaccines were highly effective and have not presented any serious safety concerns.

Bailey, Koh and other leaders said it is crucial for the companies to publish full trial results as soon as possible to win approval from physicians.

In coming weeks, the FDA and the companies will be analyzing data from the trials in more detail. The agency has said it will require two months of follow-up safety analysis in trial participants before it will consider issuing emergency-use authorizations -- still much faster than the typical minimum follow-up of six months. An FDA committee of independent advisers also will review available efficacy and safety evidence in a public hearing before approving the vaccine. Pfizer did not respond to requests for comment. Moderna said it plans to release more data that should satisfy concerns.

Bailey, the AMA president, said that as an allergist and immunologist, she frequently receives questions about the new vaccines.

"When my patients ask me, I say once I've seen the studies and feel confident that no corners have been cut, and no steps have been skipped, and we have a safe and effective vaccine, I'll be the first in line," she said.