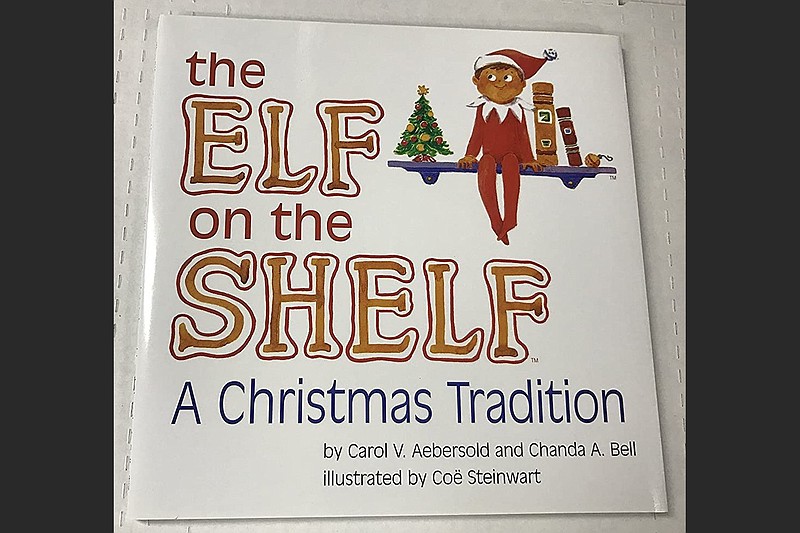 ATLANTA — Carol Aebersold in 2004 was an empty nester. She had raised three kids to adulthood but felt like her primary purpose was gone.

She expressed her feelings of emptiness with her daughter, Chanda Bell, at her Marietta, Ga., home. "There's nothing left for me to do," she told Chanda morosely. But Chanda, knowing her mom was a good writer, suggested she write a book.

Skeptical, "I rolled my eyes like a teenager," Aebersold said. But Bell spied her mom's childhood Christmas elf, Fisbee, sitting on the kitchen shelf and thought it would be a great idea for her to share their family tradition with the rest of the world.

In the 1950s, when Aebersold was a child, her parents would leave Fisbee the Elf in various places in their home as a liaison to Santa Claus to see if she was being naughty or nice. For her, it was a magical tradition. She repeated the exercise again with her three kids in the 1980s. Aebersold was about to roll her eyes again, but a little voice inside of her — perhaps Fisbee himself — told her to go for it.

Raiding her 401(K) and maxing out Bell's credit cards, they began peddling the self-published book "Elf on the Shelf." After hand-selling 5,000 copies in 2005, the ladies drew the attention of Hallmark Store franchises, and boutique stores embraced "Elf on the Shelf" in 2006, which became a sensation that has since sold more than 15 million copies with 10 million more of spinoff books.

They created a 30-minute animated special in 2011 that debuted on CBS for three years and has since been airing multiple times on TBS. Over the years, they have expanded into "Claus Couture" clothing, a separate Elf Pets franchise, "Elf on the Shelf" cereal and a brand new deal with Netflix to create new TV shows and movies about their expanding North Pole universe.

Earlier this year, the recently renamed company Lumistella shopped their ideas in Hollywood to a dozen suitors, and the company ultimately chose Netflix.

"They have a reputation throughout the industry for letting creatives tell their stories," said Christa Pitts, Bell's twin sister and co-chief executive officer who used to be a host at QVC. "That was really appealing to us."

Lumistella will be working with Vertigo Entertainment, which created the "Lego" movies, for its future programming.

In recent years, Lumistella has been expanding its North Pole universe with characters such as a St. Bernard pup and an Arctic fox and backstories for characters including Mrs. Claus.

Bell, who oversees product development and licensing, said no particular concepts have been greenlit yet, but "I've got so many ideas in my head. Welcome to a beautiful mind! The story lines are endless. I have a whole entire backstory about how the North Pole operates with individual elves and elf pets. We are excited to explore them in different ways and genres."

Aebersold is now semi-retired in Florida while her daughters have continued to run the company out of an Atlanta office with 70 employees. Privately held, they do not reveal revenues or profits.

"Early on, we scraped and scrimped so much," Aebersold said. "I am now bursting my buttons with pride. My daughters are phenomenal."

playing aspect of the "Elf on the Shelf" concept.

"It seems to be translating across cultures and is showing signs to be culturally enduring," he said. "And the mantra now for families staying home for the holidays, something like 'Elf on the Shelf' is something you can do with your kids. Maybe it will be more popular this year, with or without Netflix."

The pandemic hit just as Lumistella was planning product orders for this Christmas, and Pitts said they scaled back some orders to be cautious. But, she feels confident now sales will be festive this Christmas, with more elf clothing options and a Santa's "enchanted" talking cookie plate, on top of a second "Elf on the Shelf" vanilla candy cane cookie cereal exclusively for Walmart.

They are bullish on a new "Elf on the Shelf" advent calendar with a Christmas train and "Merry Mini" figurines. They also have relationships with Target, Kohl's and Dollar General.

"We are creating joy when people are very uncertain and anxious," said Pitts, who oversees company operations such as retail, marketing and finance. "We want people to feel like there's something normal about their holidays. That's what we're focused on. We've been getting tons of questions from kids if the elves can get sick from the virus. Do they get covid? We say no. They are magical!"