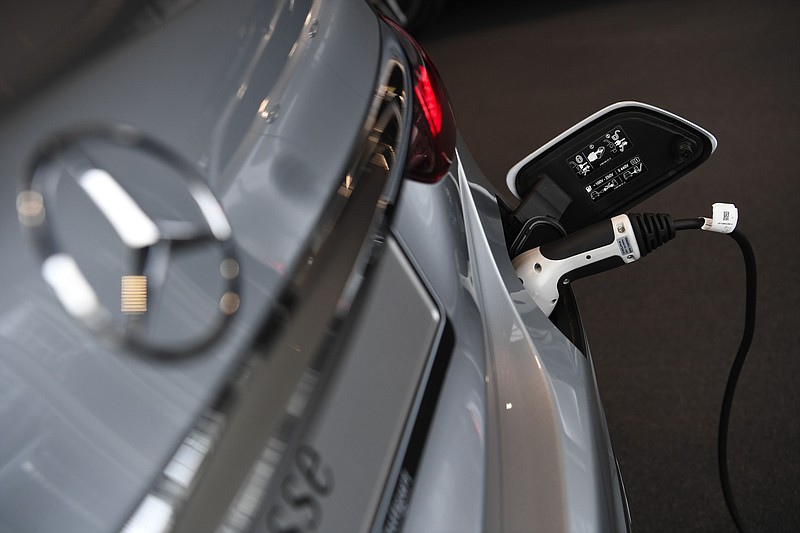 An electric charging plug refuels a Mercedes-Benz AG E-Class electric automobile at the automaker's showroom, operated by Daimler, in Boeblingen, Germany, on Sept. 29, 2020. MUST CREDIT: Bloomberg photo by Andreas Gebert.

Europe is taking unprecedented steps to phase out gasoline and diesel cars and bring an end to the almost 150-year-long era of the internal combustion engine.

The U.K.'s 2030 ban on cars lacking a plug and Germany's four-year extension of subsidies for electric vehicles, or EVs, reflect the carrot-and-stick approach governments are taking to getting auto companies to embrace batteries. Regulatory pressure already has helped EVs seize a greater share of passenger-car sales in Europe than any other developed auto market in the world.

The industry has pleaded for the help because sales are sliding again due to the pandemic. There also will be drawbacks: the need for fewer workers to manufacture battery-powered cars will spur tens of thousands of job cuts over the coming years. And while costs are coming down, EVs are still years away from reaching price parity with the gas and diesel cars consumers are used to.

"In the long term, the days of the internal combustion engine in Europe are numbered," Colin McKerracher, head of advanced transport for BloombergNEF, said by phone. "While the policy is driving the supply side, there is also a real demand for these vehicles. The people who are buying EVs love them."

The political pushes and pulls driving Europe's EV sales momentum are starting to lure battery-manufacturing investments that suppliers have for years been reluctant to make. China's SVolt Energy Technology said last week it will join larger peer Contemporary Amperex Technology in opening a factory in Germany in the coming years. Tesla cell supplier Panasonic Corp. also may start up a battery business in Norway.

While the U.K. is moving up its gas- and diesel-car ban by a decade, its 10-point plan to foster a "green industrial revolution" doesn't take an entirely prohibitive approach. Prime Minister Boris Johnson announced almost $3.2 billion of subsidies and support for charging infrastructure, EV development and production.

That amount of backing will only partially offset Brexit uncertainties gripping the industry and pales in comparison to Germany's aid. Chancellor Angela Merkel's government is offering carmakers and suppliers $5.9 billion to help weather the coronavirus crisis and invest in electric cars.

Others in the industry are less sanguine. Electric vehicles account for only about 5% of sales in the U.K., with prohibitive cost and a dearth of charging infrastructure holding back demand, said Mike Hawes, chief executive officer of the Society of Motor Manufacturers and Traders.

"All the conversations we have with customers, with drivers, all they're concerned about is availability of charging," Hawes said in an interview with Bloomberg Television.

Automakers similarly pushed back in September after the European Union released plans to set stricter emissions limits for the next decade. To reduce carbon-dioxide emissions by 55% from 1990 levels rather than the previously planned 40%, the European Commission sees carmakers needing to gradually phase out combustion engines.

While EVs including the Tesla Model 3, VW ID.3 and Renault Zoe are having some success, U.K. carmaker Jaguar Land Rover has struggled to get much traction with its I-Pace electric crossover. Electric and plug-in hybrid cars were just 6% of sales last quarter.

"It's not our job to defend the internal combustion engine," BMW CEO Oliver Zipse said at an event Wednesday hosted by the newspaper Sueddeutsche Zeitung. "We will make what the customer wants to buy."