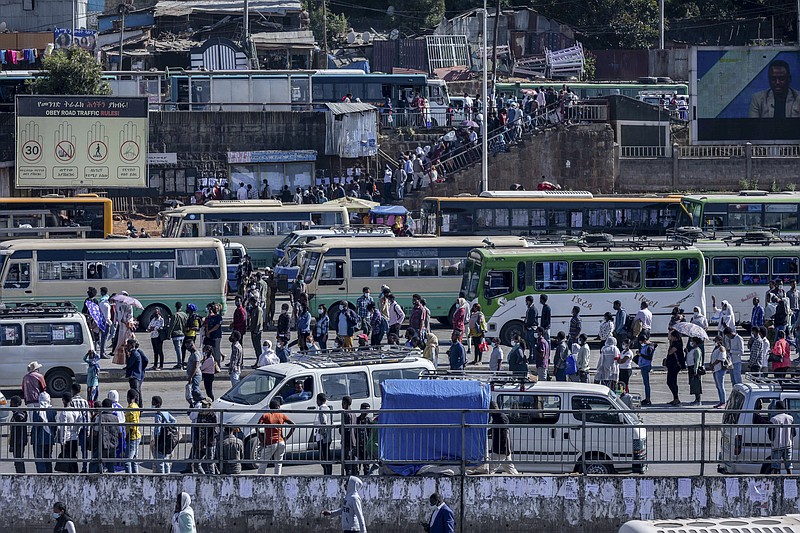 Passengers queue to get on buses in the capital Addis Ababa, Ethiopia Friday, Nov. 6, 2020. Ethiopia's prime minister says airstrikes have been carried out against the forces of the country's Tigray region, asserting that the strikes in multiple locations "completely destroyed rockets and other heavy weapons." (AP Photo/Mulugeta Ayene)

NAIROBI, Kenya -- Shaken by the gunfire ringing out around her town in Ethiopia's northern Tigray region, the woman decided to get out. She joined a long line at the government office for the paperwork needed to travel. But when she reached the official, he told her she had wasted her time.

"This is for people who are volunteering to fight," he said.

As Ethiopia's government wages war in its Tigray region and seeks to arrest its defiant leaders, who regard the federal government as illegitimate after a falling-out over power, the fighting that could destabilize the Horn of Africa is hidden from outside view. Communications are severed, roads blocked and airports closed.

But as one of the few hundred people evacuated last week from Tigray, the woman in an interview with The Associated Press offered rare details of anger, desperation and growing hunger as both sides reject international calls for dialogue, or even a humanitarian corridor for aid, in their third week of deadly fighting. The United Nations says food and other essentials "will soon be exhausted, putting millions at risk."

With supplies blocked at the Tigray borders and frantic aid workers using a dwindling number of satellite phones to reach the world, it is extremely difficult to hear accounts from those suffering on the ground. At least several hundred people have been killed, and the United Nations has condemned "targeted attacks against civilians based on their ethnicity or religion."

The woman, an Ethiopian aid expert who spoke on condition of anonymity out of concern for herself and loved ones, gave one of the most detailed accounts yet of a population of some 6 million short of food, fuel, cash and even water, and without electricity as Ethiopia's army marches closer to the Tigray capital every day.

"I am telling you, people will slowly start to die," she said.

Not all of her account could be verified. But the description of her passage through the Tigray capital, Mekele, to Ethiopia's capital, Addis Ababa, fit with others that have trickled out from aid workers, diplomats, a senior university official and some of the more than 35,000 refugees who have fled into Sudan after the fighting began Nov. 4. She was connected with the AP by a foreign evacuee.

As borders, roads and airports swiftly closed after Ethiopia's prime minister announced that Tigray forces had attacked a military base, the woman felt torn. She had family in Addis Ababa and wanted to be with them.

Banks had closed, but loved ones gave her enough money to travel to Mekele. As she drove, she squeezed her car through makeshift barriers of piled-up stones. She said she did not see fighting.

In Mekele, she met with friends around the university. She was shocked by what she saw. "It was a panic," she said. "Students were sleeping outside the university because they had come from all over." There was little to feed them. Supplies in the markets were running low.

While in Mekele, she said, she heard three "bombardments" against the city. Ethiopia's government has confirmed airstrikes around the city. When Prime Minister Abiy Ahmed in televised comments told civilians in Tigray not to congregate for their safety, "that was a big panic," she said. "People said, 'Is he going to completely bomb us?' There was huge anger, people pushing and saying, 'I want to fight.'"

When she visited a loved one at a university hospital, "a doctor said they have no medicine, no insulin. At all," she said. "They were hoping the [the Red Cross] would give them some."

Seeking to travel on to Addis Ababa, she found fuel on the black market but was warned her car could be a target. But the U.N. and other aid groups had managed to arrange a convoy to evacuate nonessential employees to the Ethiopian capital, and she found space on one of the buses. "I think I was quite lucky," she said.

But as the buses pulled out of the capital, she was scared.

The convoy of some 20 vehicles made its way through the night to the capital of the arid Afar region east of Tigray, then through the restive Amhara region, going slowly from checkpoint to checkpoint, not all of the security forces manning them briefed on the evacuation.

"It took four days in total," the woman said of the journey, which would have taken a day by the direct route. "I was really afraid." Tigray special forces watched over the convoy in the beginning, she said. Near the end, federal police accompanied it. They were "very disciplined," she said.

Now, after arriving in Addis Ababa last week, she adds her voice to the growing calls for dialogue between the two governments, which now regard each other as illegal after the once-dominant Tigray regional party and its members were marginalized under Abiy's reformist two-year rule.

"I think they should negotiate," she said. "And we really need a corridor so food and medicine can go in. What about the people?"

The prospect of dialogue appears distant. The U.S. Embassy last week told citizens remaining in Tigray to shelter in place if they could not get out safely.

Like other worried families in Ethiopia and the diaspora, the woman cannot reach her relatives left behind. Many foreigners are still trapped in Tigray, too, she said.

"No one knows who is alive, who is dead," she said. "This is a catastrophe for me." 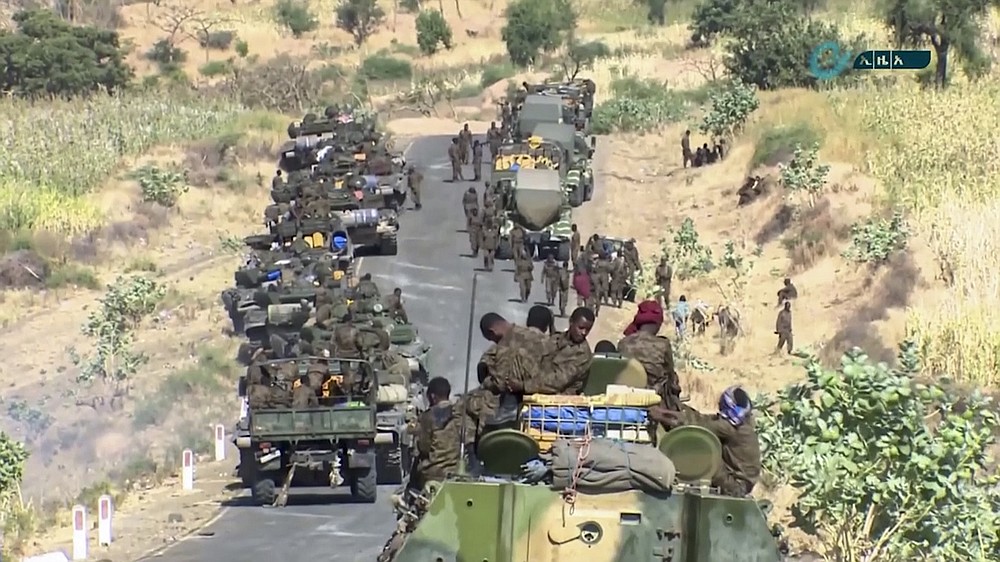 This image made from undated video released by the state-owned Ethiopian News Agency on Monday, Nov. 16, 2020 shows Ethiopian military gathered on a road in an area near the border of the Tigray and Amhara regions of Ethiopia. Ethiopia's prime minister Abiy Ahmed said in a social media post on Tuesday, Nov. 17, 2020 that "the final and crucial" military operation will launch in the coming days against the government of the country's rebellious northern Tigray region. (Ethiopian News Agency via AP) 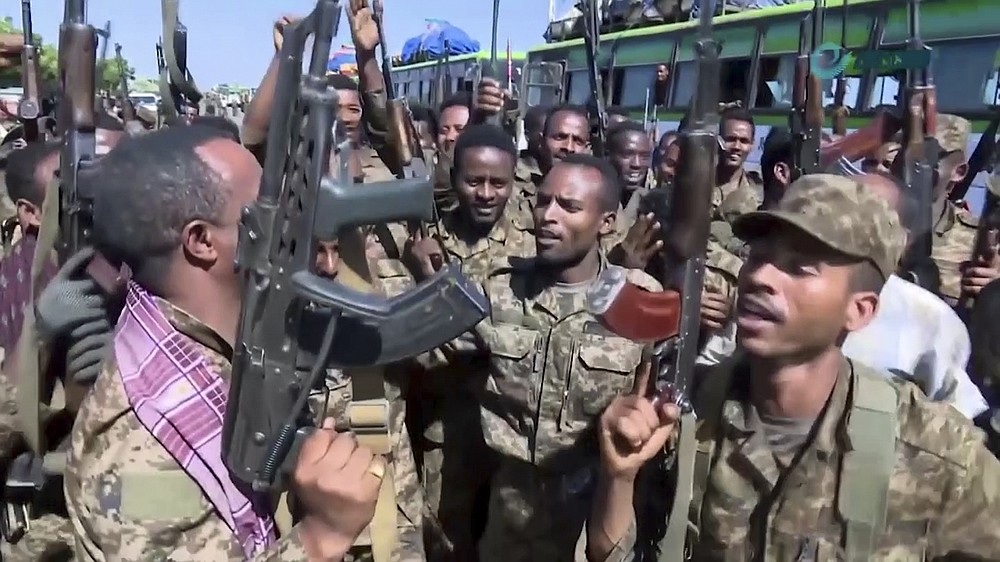 This image made from undated video released by the state-owned Ethiopian News Agency on Monday, Nov. 16, 2020 shows Ethiopian military cheering and dancing in front of cameras on a road in an area near the border of the Tigray and Amhara regions of Ethiopia. Ethiopia's prime minister Abiy Ahmed said in a social media post on Tuesday, Nov. 17, 2020 that "the final and crucial" military operation will launch in the coming days against the government of the country's rebellious northern Tigray region. (Ethiopian News Agency via AP) 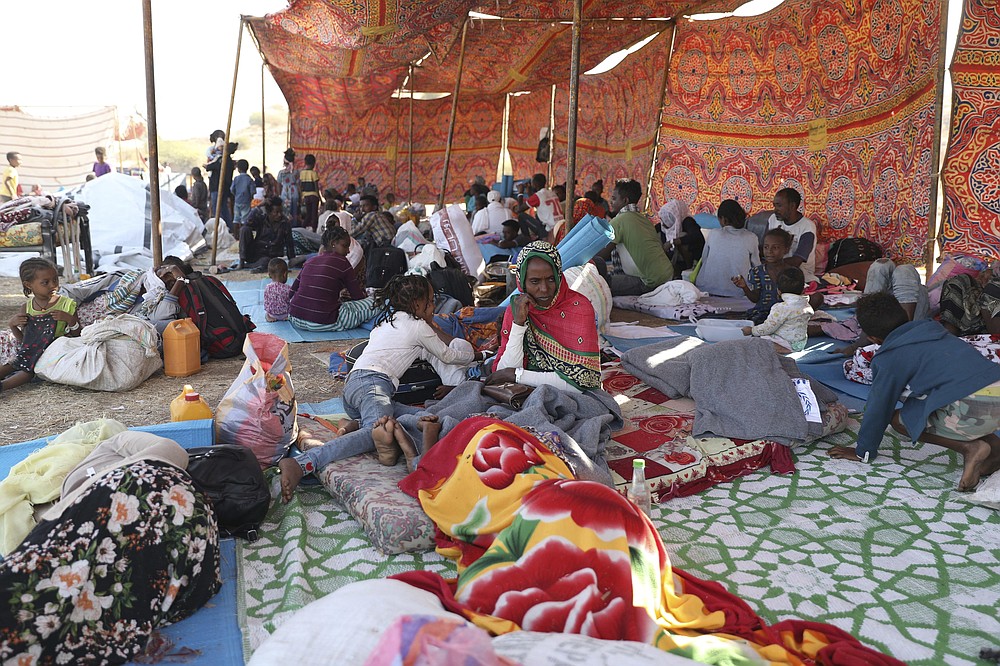 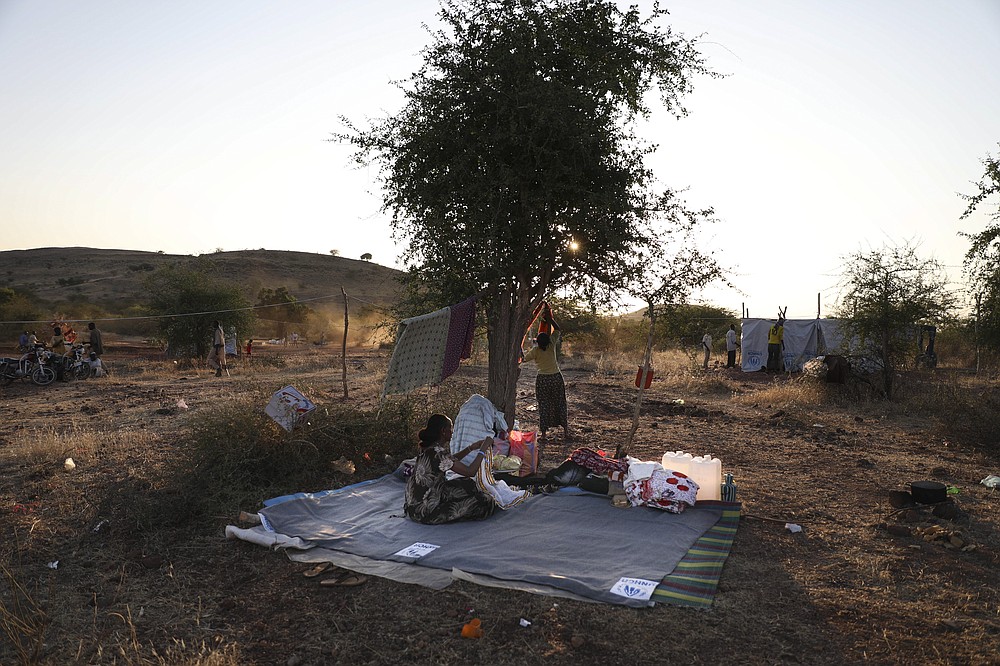 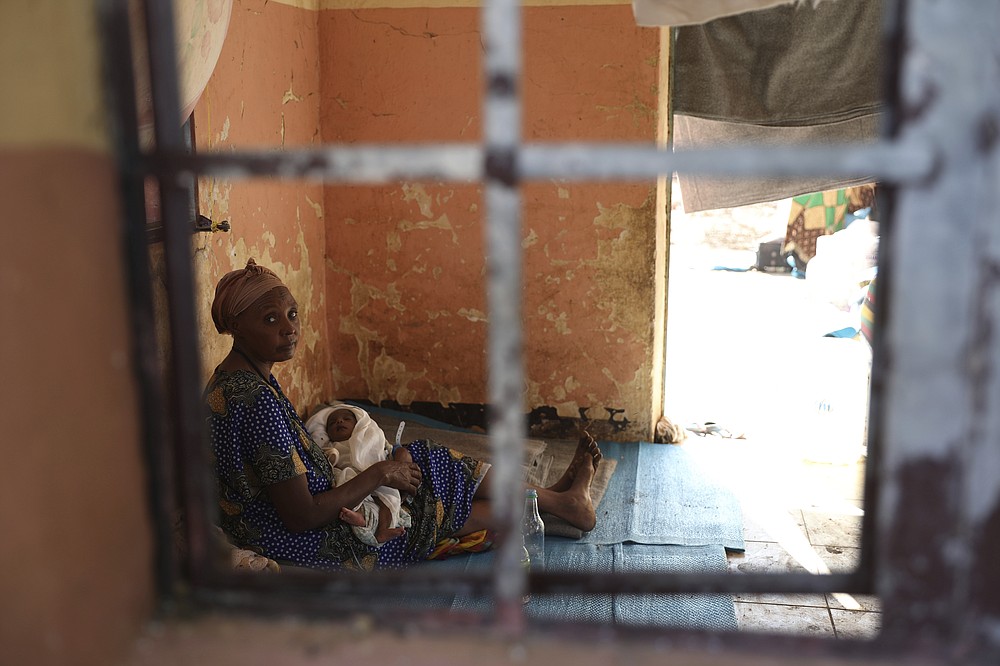 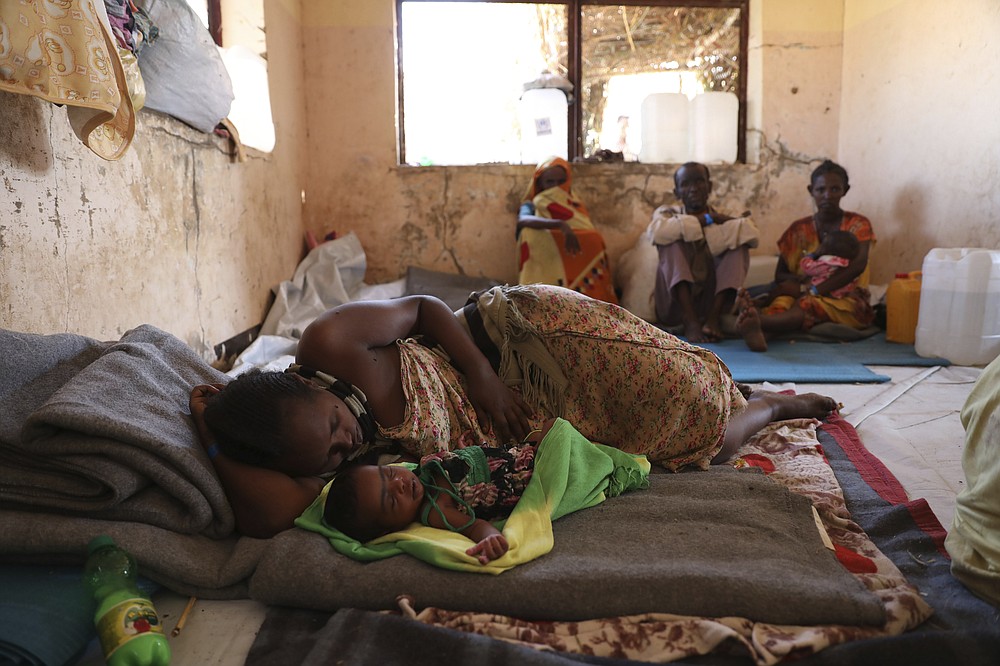 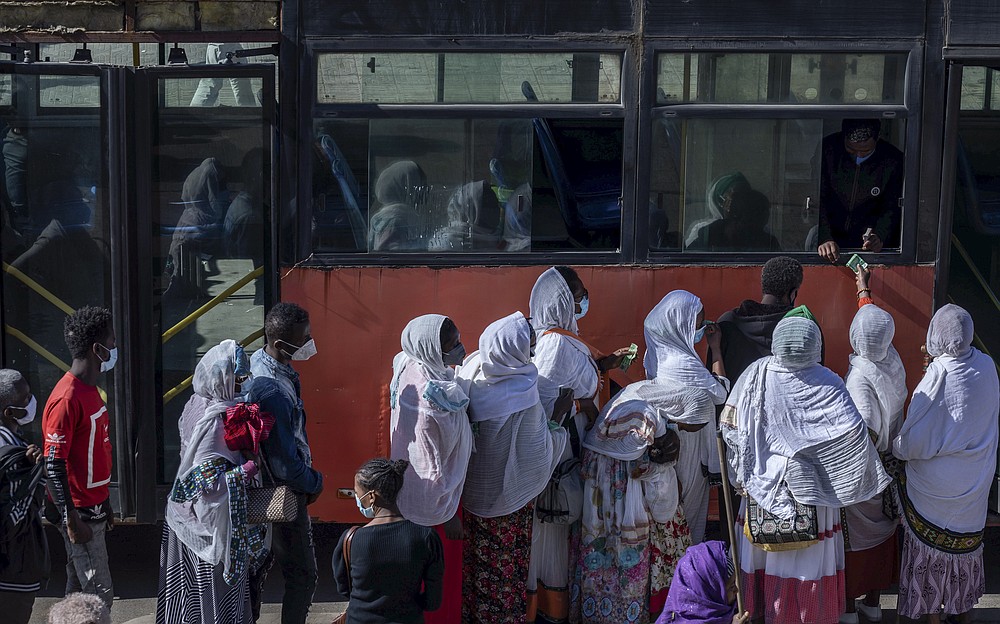 Passengers queue to get on a bus in the capital Addis Ababa, Ethiopia Friday, Nov. 6, 2020. Ethiopia's prime minister says airstrikes have been carried out against the forces of the country's Tigray region, asserting that the strikes in multiple locations "completely destroyed rockets and other heavy weapons." (AP Photo/Mulugeta Ayene)
ADVERTISEMENT