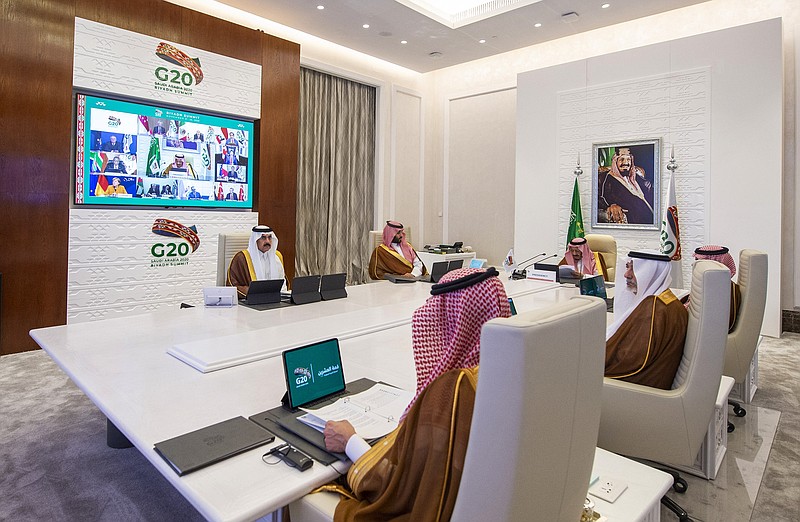 DUBAI, United Arab Emirates -- The Group of 20 summit opened Saturday with appeals by the world's most powerful leaders to collectively chart a way forward as the coronavirus pandemic overshadows this year's event, transforming it from a series of in-person meetings to a virtual gathering of speeches and declarations.

The pandemic, which has claimed almost 1.4 million lives worldwide, has offered the G-20 an opportunity to prove how such bodies can facilitate international cooperation in crises -- but has also underscored their shortcomings.

"We have a duty to rise to the challenge together during this summit and give a strong message of hope and reassurance," said Saudi Arabia's King Salman bin Abdulaziz, whose kingdom is presiding over the G-20 this year.

While G-20 countries have contributed billions of dollars toward developing a vaccine for the virus, they have also mostly focused on securing their own supplies. Countries such as the U.S., Britain, France and Germany -- all G-20 member states -- have directly negotiated deals with pharmaceutical companies to receive billions of doses, meaning the vast majority of the world's vaccine supply next year is already reserved.

[Video not showing up above? Click here to watch » https://www.youtube.com/watch?v=Pgt5a9q2OaM]

President Donald Trump highlighted what the U.S. has done in response to the coronavirus and the nation's efforts to rebuild the economy and work on vaccines, which are expected to become available soon, according to White House press secretary Kayleigh McEnany. Trump, however, appeared not to have acknowledged that Joe Biden won this month's presidential election.

"It's been a great honor to work with you, and I look forward to working with you again for a long time," Trump said, according to audio obtained by The Guardian. The South China Morning Post reported similar comments.

Expectations remain low that the two-day summit will produce significant results in its toned-down setting for issues such as global economic crises and climate change. Members are expected to finalize a framework for providing poorer nations with debt relief and vaccine initiatives.

A day before the summit, U.N. Secretary-General Antonio Guterres said that while $10 billion has been invested in efforts to develop vaccines, diagnostics and therapeutics, another $28 billion is needed for mass manufacturing, procurement and delivery of covid-19 vaccines around the world.

Guterres called on more G-20 nations to join COVAX, an international initiative to distribute vaccines to countries worldwide. The United States has declined to join under Trump.

The pandemic has had a far-reaching economic effect on developing countries and pushed millions of people into extreme poverty. It has also plagued the world's wealthiest nations, with nine G-20 countries ranking among the highest globally for the cases of covid-19 recorded. The United States tops the list, followed by India, Brazil, France, Russia, Spain, the U.K., Argentina and Italy, according to a count kept by Johns Hopkins University.

Three G-20 leaders participating in the summit have been infected by the coronavirus this year: British Prime Minister Boris Johnson, Brazilian President Jair Bolsonaro and Trump.

The virus shows no signs of abating as major cities in the U.S. and Europe bring back lockdowns and curfews. The World Health Organization said more cases have been reported in the past four weeks than in the first six months of the pandemic.

The International Labor Organization said an equivalent of 225 million full-time jobs were lost in G-20 countries alone in the third quarter of 2020. G-20 member countries represent around 85% of the world's economic output and three-quarters of international trade.

In a sign of the times, the traditional family photo of leaders in the summit was digitally designed and superimposed on a historical site just outside the Saudi capital, Riyadh, which would have hosted the gathering.

As part of the summit, seven leaders released video messages on "Pandemic Preparedness and Response." French President Emmanuel Macron warned of the challenges in obtaining "universal access to health technologies against covid-19." German Chancellor Angela Merkel called for strengthening the World Health Organization and stressed that the pandemic can be overcome only if an affordable vaccine is available to all nations.

As leaders urged greater global cooperation to ensure vaccines reach beyond the wealthiest regions, they drew clear contrasts with the Trump administration's break with the WHO. The comments also struck at questions over whether U.S.-made vaccines would become widely available beyond commercial deals once President-elect Joe Biden takes office and possibly restores ties with the WHO.

In a video statement released ahead of the summit, Johnson appealed to global leaders to harness the resources of the world's wealthiest nations to both end the pandemic and tackle climate change.

"Our fates are in each other's hands," said Johnson, who planned to attend two virtual events at the summit while isolating at home in London after coming into contact with someone who tested positive for covid-19.

Bolsonaro, who spent months downplaying the severity of the virus while deaths mounted rapidly in Brazil, emphasized in a video message that world leaders "should take care of people's health and of the economy at the same time."

Chinese President Xi Jinping said his country was "willing to strengthen cooperation" with others to accelerate vaccine development and distribution.

"We will fulfill our commitments, offer help and support to other developing countries, and work hard to make vaccines a public good that citizens of all countries can use and can afford," Xi said.

Russian President Vladimir Putin said his country is ready to share its vaccines for "humanitarian considerations," warning that the pandemic is battering the global economy and raising risks of "mass, long-term unemployment and the accompanying rise in poverty and social dislocation."

"And the role of the G-20 is to ensure this doesn't happen," said Putin, according to the Kremlin translation of his remarks.

Turkish President Recep Tayyip Erdogan said the G-20 should endorse "affordable and fair distribution of covid-19 vaccine for everyone." Similar messages were shared by Canadian Prime Minister Justin Trudeau and South African President Cyril Ramaphosa, who said all nations should have "equitable and affordable access" to a vaccine.

As leaders from across the globe began the summit, Trump's thoughts were elsewhere -- on the tussle over the U.S. election.

The president kept his head down, staring at something on his desk during the nine-minute speech by King Salman welcoming countries to the meeting. The speech and footage of other leaders was shown live on the official G-20 website.

Within moments of the monarch ending his address, Trump tweeted to comment on an encounter with Republican leaders of the Michigan Legislature. He promised: "We will show massive and unprecedented fraud!"

After a flurry of tweets, he delivered his own remarks before leaving the virtual session and heading to his golf course near Washington, D.C. Trump has appeared only occasionally in public since his election defeat, though he continues to insist he won and is pursuing legal strategies to challenge the result.

Trump's post after the Saudi king's remarks was in response to a tweet by Michigan Senate Majority Leader Mike Shirkey, who met Trump at the White House on Friday along with House Speaker Lee Chatfield. "We have not yet been made aware of any information that would change the outcome of the election in Michigan," Shirkey and Chatfield wrote.

Trump went on to send tweets alleging voter fraud and commenting on his son, who has been diagnosed with covid-19 -- even as leaders continued their discussions in private.

The president has often clashed with other leaders during such summits over the past four years, especially on issues such as multilateralism, climate change and international trade.

In Trump's own opening remarks to the meeting, he said the U.S. under his watch had made the world safer, strengthening NATO, defeating the Islamic State and fighting terrorism, according to two G-20 nation officials. He claimed America had been efficient in fighting the pandemic while touting low unemployment and what he said was surging demand in the U.S. economy.

Specifically on a covid-19 vaccine, Trump repeated his long-held stance that "every American" who wanted one should have access, according to an official with knowledge of his remarks -- implying such shots should be optional. He touted progress by Pfizer and Moderna specifically, the official said.

Unlike other leaders, Trump did not speak of the need to share vaccines around the world, especially with poorer nations. He also urged fellow leaders to reject lockdown measures as a tool to control the virus, one official said.

Shortly after his remarks, Trump left the virtual session to go golfing-- as the U.K.'s Johnson was speaking -- and was replaced first by Treasury Secretary Steven Mnuchin and then by White House economic adviser Larry Kudlow, according to officials familiar with the meeting. Some other leaders also dropped off after giving their speeches, they said.

A U.S. official said it was standard practice for leaders to come and go during such summits, which can continue for many hours. The official, who asked not to be identified discussing private matters, said the president stayed for at least the first hour of the meeting.

Turkey's Erdogan spoke with Saudi Arabia's Salman by phone ahead of the summit, the president's office said Saturday.

The leaders discussed improving relations between the two countries, the statement said.

Ties between Turkey and Saudi Arabia deteriorated sharply after the 2018 killing of Saudi journalist Jamal Khashoggi at the Saudi Consulate in Istanbul, adding to tensions over Turkey's support for the Muslim Brotherhood, viewed by Riyadh as a terrorist group.

​​​​​Information for this article was contributed by Aya Batrawy, Danica Kirka, Tia Goldenberg, Deb Riechmann and staff members of The Associated Press; by John Follain, Arne Delfs, Ilya Arkhipov and Josh Wingrove of Bloomberg News; and by Miriam Berger, Kareem Fahim and Joshua Dawsey of The Washington Post. 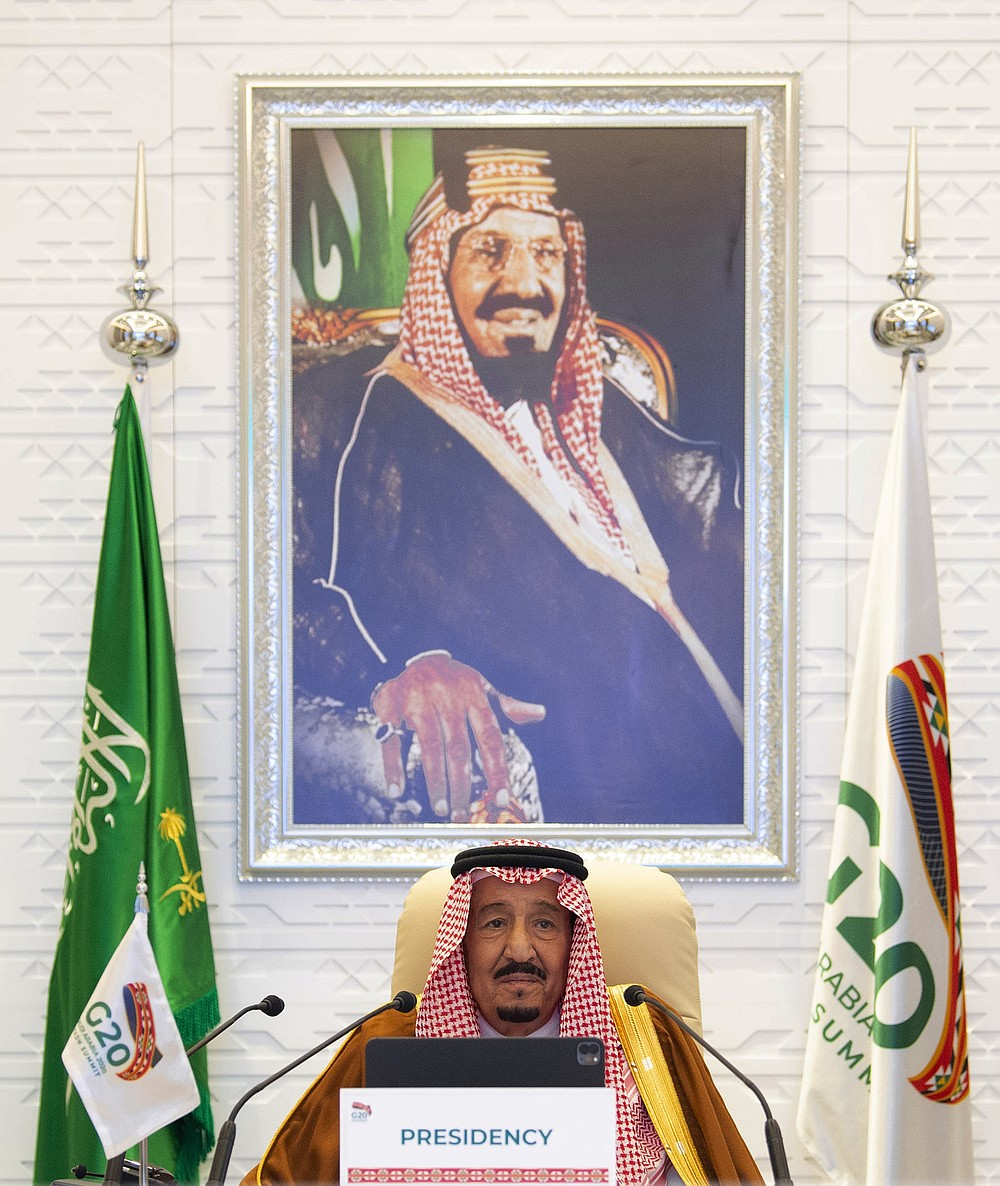 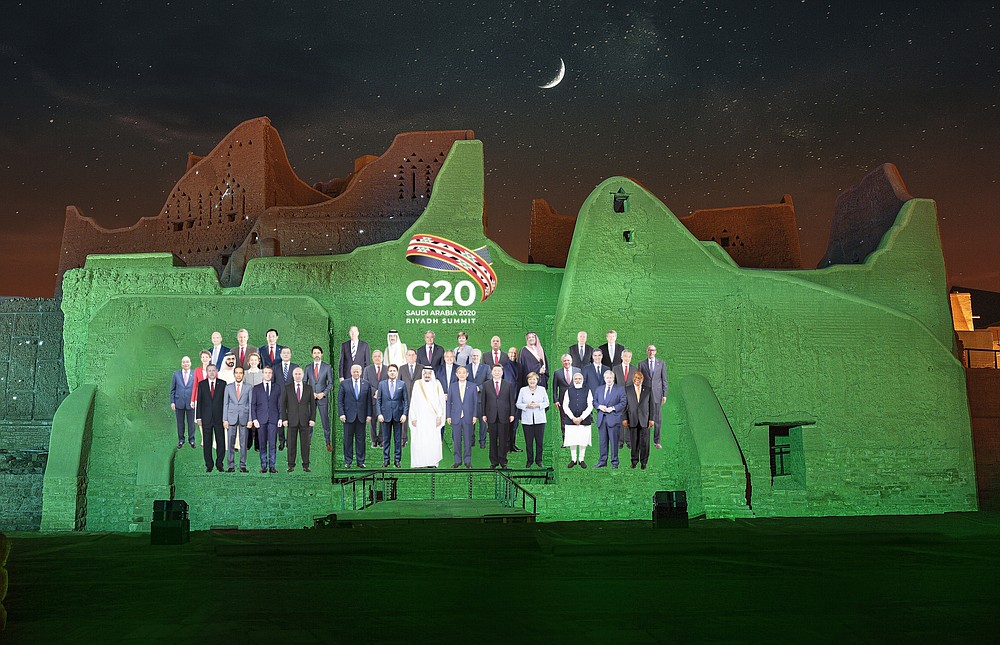 In this handout image provided by DGDA, Diriyah Gate Development Authority of Saudi, a family photo featuring members of the G20 is projected onto the walls of Salwa Palace, At Turaif on Saturday, Nov. 20, 2020 in Diriyah, on the outskirts of Riyadh, Saudi Arabia. (Meshari-Alharbi, DGDA via AP)
ADVERTISEMENT