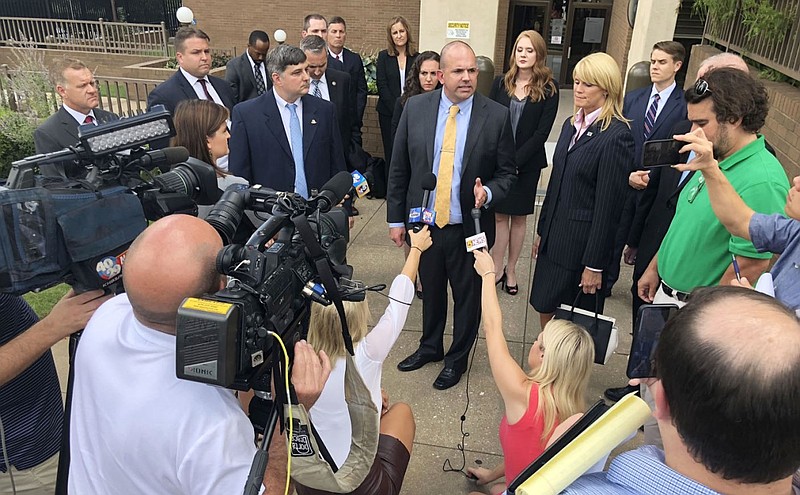 Duane "Dak" Kees (center), then the U.S. Attorney for the Western District of Arkansas, speaks Wednesday, Sept. 5, 2018, alongside Assistant U.S. Attorney Kenneth Elser (left) after the sentencing hearing for former state Sen. Jon Woods outside the John Paul Hammerschmidt Federal Building in Fayetteville. Woods was sentenced to more than 18 years for his role in a kickback scheme involving state General Improvement Funds.

Some of the people convicted of corruption in a kickback scheme involving state grants have served their sentences and are free, while others have been released to home detention.

Two more recently reached the end of their appeals and remain in federal prisons.

And two who pleaded guilty more than a year ago still await sentencing, including Jeremy Hutchinson, former state senator and the nephew of Gov. Asa Hutchinson.

Prosecutors have announced no new indictments stemming from the grant scheme since August 2019.

A web of corruption at the state Capitol unraveled beginning in 2016 and continued throughout last year. The first indictments came from spending involving the state General Improvement Fund. Tentacles from there lead to corruption in the state's Medicaid programs, campaign finance reports and nursing home regulations.

The graft involved at least $20 million taken from taxpayers or the nonprofit.

Duane "Dak" Kees was U.S. attorney for the Western District of Arkansas at the time of most of the prosecutions.

"I'm old school in the sense that I would like to think that our legislators, or politicians, are honorable people wanting to do the will of the people. And, the best of us get corrupted, I understand that. It's sad, but it's true," Kees said "But, Little Rock should not be a place to go get rich. It shouldn't be. But, unfortunately, people have found a way."

Without some changes, Kees said he believes another legislative scandal is probably inevitable.

"Those in Little Rock will walk the straight and narrow for about 10 years. This scared them. They'll remember the 18 and a half years he got in federal prison," Kees said of former state Sen. Jon Woods of Springdale.

"Fifteen years from now, there'll be nobody left in Little Rock to remember this," he said. "They will have forgotten the lesson, so it'll be a different scheme, but I think it'll happen again. I hate to say that, but it's the God's honest truth."

Whispers of impending federal indictments circulated for months around the state Capitol before former state Rep. Micah Neal pleaded guilty Jan. 4, 2017, to one count of conspiracy to commit honest-services mail and wire fraud.

Under federal law, honest services fraud is committed by public officials who owe "honest service" to the public. The FBI and the Internal Revenue Service conducted the investigation that lead to the charge.

Neal admitted to taking kickbacks for directing state grants to the private Ecclesia College of Springdale and a Bentonville nonprofit owned by a company now known as Preferred Family Healthcare. Preferred Family was a major recipient of state Medicaid money.

An Arkansas Democrat-Gazette investigation in 2018 found Preferred Family and its subsidiaries received $245 million in Medicaid payments for mental health services from fiscal 2011-18, one-third more than the second-ranking provider in that span. At its peak, Preferred Family collected $43.9 million in 2016 from the state's Medicaid-funded mental health program -- one in every seven dollars the program spent that year.

The kickbacks and bribery involved a now-defunct state program, the General Improvement Fund, in which money was distributed by legislators to pay for local projects. The improvement fund contained tax money left unspent at the end of the state's two-year budget cycle. The fund also included interest earned on state accounts.

Since then, any money that would have formerly gone into the General Improvement Fund now is either appropriated by the Legislature as a whole or flows into different funds overseen by state agencies or the governor's office.

"I do think the office of the governor has pretty much shut it down from alterations to the budget and, at least for this administration, that is controlled," said Jay Barth, professor of politics, emeritus, at Hendrix College in Conway.

Indictments came soon after Neal's plea for his partners in crime: Woods, Springdale Republican in the state Senate; Oren Paris, III, then-president of Ecclesia College; and Randell Shelton Jr., a consultant and friend of Woods and Paris.

In the scheme, Paris hired Shelton as a consultant. Woods and Neal obtained grants for the college. Shelton then passed along some of the grant money to Woods and Neal, according to trial testimony and financial records.

Woods, Paris and Shelton were indicted March 2, 2017. A jury convicted Woods of 15 counts of wire fraud, mail fraud and money laundering on May 3, 2018. Shelton was convicted of 12 federal corruption-related counts in the same trial.

Paris pleaded guilty April 3, 2018, to one count of conspiracy for his involvement in the schemes.

Attorneys for Woods, Paris and Shelton declined to comment for this article, as did Neal.

Voters share some of the blame for who they're sending to the Capitol to represent them, Kees said.

Kees said he also doesn't believe voters are as in tune with the goings on in Little Rock as they once were.

Since the investigation began, employees or consultants hired by the Missouri-based Preferred Family Healthcare and one board member have been indicted, some convicted and one committed suicide. The company's top two executives -- Tom and Bontiea Goss -- await trial in the federal court of the Western District of Missouri.

Preferred Family, a Springfield, Mo.-based provider of mental health care and rehabilitation services that had 47 affiliates in Arkansas and was the recipient of about $245 million of Arkansas Medicaid money and other state money for services. Preferred Family pulled out of Arkansas in July 2018 as a result of the scandal.

Jeremy Hutchinson, who was paid for legal work for Preferred Family, pleaded guilty June 24 and 25, 2020, to one count each in three federal judicial districts -- Western and Eastern in Arkansas and Western in Missouri -- on charges including accepting bribes and tax fraud.

He awaits sentencing and is expected to testify against the Gosses, as is Robin Raveendran, former executive vice president at Preferred Family who pleaded guilty in federal court in June 2019 to one count of conspiring to pay bribes to Jeremy Hutchinson.

Cranford, Preferred Family Healthcare's Arkansas executive and longtime lobbyist, pleaded guilty to one count of federal program bribery on June 7, 2018. He was accused of receiving bribes in connection with his work for Preferred Family and paying bribes to others to influence legislation.

"Those cases have made me reevaluate term limits," Kees said in mid-October. "The reason this happened is because there were no elder statesmen, for lack of a better term. The people down at Little Rock that took young people under their wing and showed them the ropes were lobbyists and, that's just not the way it's supposed to be. If we didn't have term limits would this have happened? I don't know, but I think it would have been a lot more difficult because you'd have had people like, 'No, I know exactly what's going on here.'"

Kees said he understands that lobbyists are a necessary part of the legislative system, and there are some good ones, but they're paid to be biased in favor of their clients and shouldn't be showing young lawmakers the ropes in the Legislature, including how to skirt the system.

Several of those convicted have already been released from prison, others are serving prison sentences and still others continue to await sentencing or their day in court.

Neal was sentenced Sept. 18, 2018, to three years' probation and one year of house arrest.

Paris was released from a medium-security prison in Marion, Ill., to home confinement, a prison spokesman confirmed in April. Paris' federal criminal conviction was upheld by the 8th U.S. Circuit Court of Appeals on March 29.

Woods was sentenced to 18 years and four months in prison. He is now in federal prison in Fort Worth.

Shelton was sentenced to six years in prison and three years of probation. Shelton is serving time at a low-security federal prison in Beaumont, Texas.

Cranford received a sentence in November 2019 of seven years in prison. He was released Aug. 5 from the federal prison camp in Texarkana. Although he served less than eight months in prison for fraud and bribery convictions, he was given credit for about 18 months that he spent in jail in Missouri before pleading guilty.

Cranford and Paris were released by the prison system to home detention or a halfway house despite having months or years left on their sentences. The Bureau of Prisons released the pair of its own accord, rather than at the direction of federal judges, after being ordered by U.S. Attorney General William Barr to release nonviolent offenders meeting certain criteria, to ease burdens on the prison system as a result of the coronavirus.

Both remain under the supervision of the Bureau of Prisons until their sentences are complete.

Money embezzled, paid in bribes and kickbacks or paid illegally to defendants totals at least $20. 3 million, according to court documents. The actual total is thought to be much higher, according to records.

Prosecutors, for example, never listed a dollar figure for money Woods received illegally, saying most of it was in cash. A judge ordered Woods to pay $1.6 million in restitution and $1 million in forfeitures.

Guilty pleas and convictions so far have resulted in orders and offers for restitution totaling almost $8 million. The largest amount is $4.3 million that Keith Noble, a former senior executive at Preferred Family, has offered to pay as part of a guilty plea in 2018. Noble is awaiting sentencing.

Forfeitures ordered or offered so far total almost $6.4 million, including more than $3.7 million from Cranford.

The two biggest players, the Gosses, are accused of embezzling more than $6 million from Preferred Family and its predecessor.

Preferred Family agreed in October to pay $6.5 million in civil settlements to the state and U.S. governments for fraudulently billing taxpayers.

Much of the money owed by Preferred Family Healthcare -- $4.6 million -- stems from a federal whistleblower claim filed by one of the firm's former mental health professionals in early 2018, newly unsealed court records show. The remaining $1.9 million is due to Arkansas under the state's false claims law.

The state's settlement closes the book on its four-year investigation into the company itself, state officials said. Preferred Family Healthcare sold its Arkansas assets in 2018. Its operations continue in Missouri, Illinois, Kansas and Oklahoma.

"I know that they have changed some of the billing. What they were doing was kind of going around the system. They found an opening there because somebody used to work for DHS, and they knew the opening was there, so they were kind of using it after they left the office," Harrelson said.