Letter pressesstate board fortwo-week delay by Compiled by Democrat-Gazette Staff From Wire Reports | November 22, 2020 at 5:08 a.m. 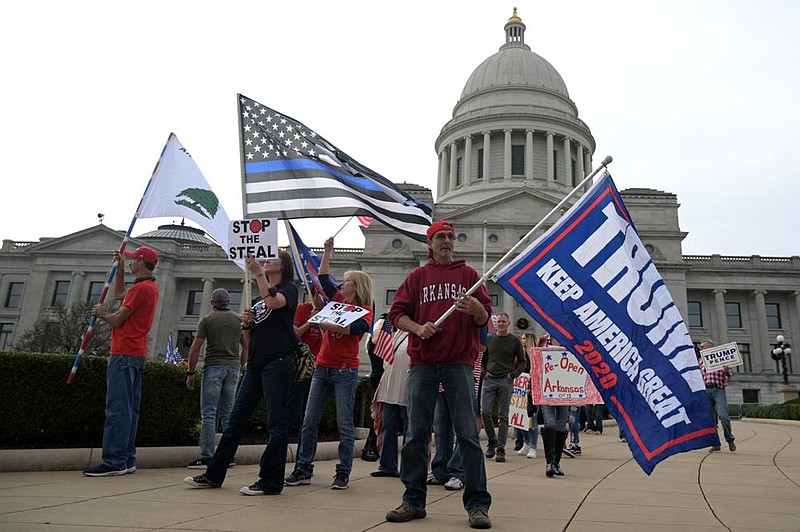 The heads of the Republican National Committee and Michigan Republican Party issued a letter Saturday calling for Michigan's state canvassing board to delay certification of the election results, marking the latest attempt by party leaders to intervene in the state's electoral process.

Meanwhile, a federal judge ruled Saturday that Pennsylvania officials can certify results that show Democrat Joe Biden winning the state by more than 80,000 votes, dealing President Donald Trump's campaign another blow in its effort to invalidate the election.

Also Saturday, Trump's legal team said his campaign has requested a recount of Georgia's votes -- which have already been recounted -- after results showed Biden winning the state by more than 12,000 votes.

In the Michigan letter -- signed by Republican National Committee Chairwoman Ronna McDaniel, who is from Michigan, and state GOP Chairwoman Laura Cox -- the officials ask the canvassing board to adjourn for 14 days and allow for a "full audit and investigation" before members convene to certify the state's election results, a procedural step that is set to take place Monday.

"This board faces a stark choice," the letter says, citing claims of "numerical anomalies" and "procedural irregularities" that they say would leave "the distrust and sense of procedural disenfranchisement felt by many Michigan voters to fester for years" if ignored by the board.

In a tweet Friday, before the letter's release, Michigan's Democratic secretary of state suggested such an audit would not be allowed under state law. Michigan law does not allow for the necessary records to be released until after the state certifies the results.

"Not sure who needs to hear this, but under state law (MCL 168.31a) audits can only be conducted after the State Canvassers certify the election," Secretary of State Jocelyn Benson wrote. "This is [because] election officials do not have legal access to the documents needed to complete audits until the certification."

Still, the demand increases the pressure on the two Republican members of the four-member state Board of Canvassers, whose actions Monday could slow down the process of finalizing election results in the battleground state.

President-elect Biden leads the state by about 150,000 votes. Norman Shinkle, one of the Republicans on the state canvassing board, said last week that although he expected Biden to win, he might suggest a delay to allow for an audit of the ballots after allegations by the president and his allies of widespread fraud.

Republican members of the state Legislature declared Friday after a White House meeting that they had learned nothing to warrant reversing the outcome in their state.

McDaniel and Cox's demand for scrutiny is entirely focused on the results in Wayne County, Michigan's largest and most Democratic county, which includes Detroit.

Wayne County officials have noted discrepancies in the vote count in a number of precincts. But they said the size of the errors was small -- a difference of one or two votes per precinct, affecting about 450 votes in all.

The GOP leaders said they "echo" the concerns voiced by failed Republican U.S. Senate candidate John James last week, citing a letter filed by his campaign that made claims of irregularities in Wayne County's elections. Cox and McDaniel called the accusations made by the James campaign "deeply concerning."

In Williamsport, Pa., U.S. District Judge Matthew Brann turned down the request for an injunction from Trump's campaign, spoiling the incumbent's hopes of overturning the results.

"In the United States of America, this cannot justify the disenfranchisement of a single voter, let alone all the voters of its sixth most populated state," the opinion said. "Our people, laws, and institutions demand more."

Trump had argued that the U.S. Constitution's guarantee of equal protection under the law was violated when Pennsylvania counties took different approaches to notifying voters before the election about technical problems with their mail-in ballots.

Pennsylvania Secretary of State Kathy Boockvar and the seven Biden-majority counties that the campaign sued had argued that Trump had previously raised similar claims and lost.

They told Brann the remedy the Trump campaign sought, to throw out millions of votes over alleged isolated issues, was far too extreme, particularly after most of them have been tallied.

"There is no justification on any level for the radical disenfranchisement they seek," Boockvar's lawyers said in a brief.

On Friday, civil-rights groups that intervened in the lawsuit had urged the judge to deny the campaign's request for an injunction and dismiss the case, arguing the claims were based on "absurd" logic contradicted by the facts in its own complaint.

The campaign seeks "to justify mass disenfranchisement with an incoherent conspiracy theory," the groups, including the Pennsylvania chapters of the NAACP and the League of Women Voters, said in the filing.

"We did not establish a representative democracy to ask courts to 'declare' who wins our elections," the groups said.

"While plaintiffs' allegations and claims continue to twist and turn, in search of a legal theory that could justify this lawsuit, their ultimate goal has remained the same: to disenfranchise" millions of voters "in an effort to overturn an unfavorable election result," they said.

Saturday's statement from Trump's legal team said: "Today, the Trump campaign filed a petition for recount in Georgia. We are focused on ensuring that every aspect of Georgia State Law and the U.S. Constitution are followed so that every legal vote is counted. President Trump and his campaign continue to insist on an honest recount in Georgia, which has to include signature matching and other vital safeguards."

Georgia law allows a candidate to request a recount if the margin is less than 0.5%. It would be done using scanners that read and tabulate the votes. County election workers have already done a complete hand recount of all the votes cast in the race, but that stemmed from a mandatory audit requirement and isn't considered an official recount under the law.

State law requires that one race be audited by hand to ensure that the machines counted the ballots accurately, and Raffensperger selected the presidential race. Because of the tight margin, a full hand count of ballots was necessary to complete the audit, he said.

Trump has criticized the audit, calling it a "joke" in a tweet that claimed without evidence that "thousands of fraudulent votes have been found." Twitter has flagged that post as containing disputed information.

Votes that hadn't previously been counted were found in several counties in the audit, which required recertification of the results in those counties before state certification.

​​​​​Information for this article was contributed by Kayla Ruble, David A. Fahrenhold and Tom Hamburger of The Washington Post; by Erik Larson of Bloomberg News; and by Mark Scolforo, Michael Tarm and staff members of The Associated Press.