Hunters take to woods for season 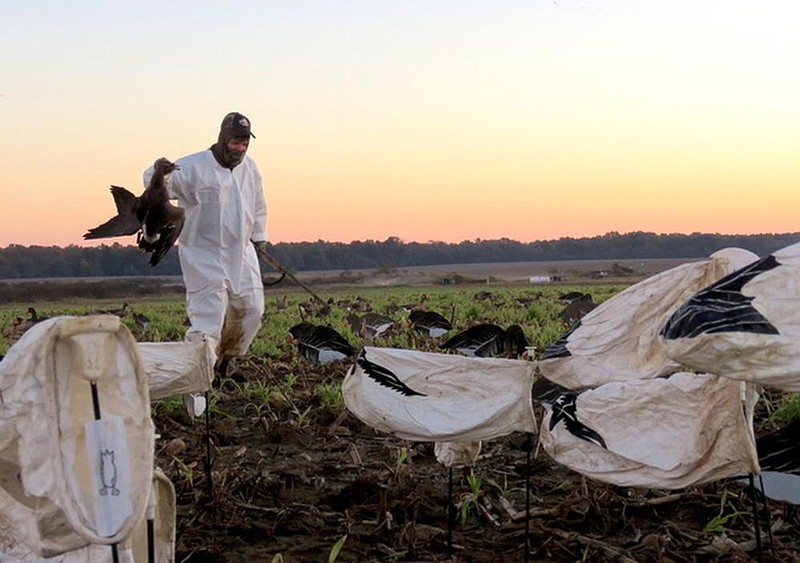 Bob Sexton retrieves one of the white-fronted geese he shot Wednesday while hunting near Carlisle. (Arkansas Democrat-Gazette/Bryan Hendricks)

Deer and duck hunting are two of the sports that Arkansans most look forward to each year. Even in a pandemic, hunters are flocking to the flooded fields and woods to take advantage of some of the best duck and deer hunting the country has to offer.

Last weekend hunters, from amateurs to experienced, headed into the woods in hopes of bagging a trophy buck, and this weekend the sounds of duck calls will fill the air.

Keith Stephens, chief of communications for the Arkansas Game and Fish Commission, said in a previous interview that about 500,000 licensed hunters typically take part in opening day of modern gun deer season, a number that includes those younger than 16 and people older than 65.

As hunters make way to their favorite spots, the Game and Fish Commission offers reminders on the guidelines and rules that must be followed.

The statewide bag limit is six deer, of which no more than two may be bucks. The statewide seasonal bag limit may be taken in any combination of zones or methods, as long as zone bag limits are not exceeded. Hunters who are 6 to 15 years old may harvest any buck without regard to antler size or points.

Four deer, no more than two bucks, which may include:

• Four does with archery;

• Two does with muzzleloader and modern gun combined.

• No dogs allowed for deer hunting. Up to two dogs may be used to blood trail wounded deer.

• No antler point restrictions on harvest within the chronic-wasting disease counties. All other counties within this zone, legal bucks must be button bucks or have at least three points on one side of the rack.

• Button bucks do count toward the buck limit in this zone.

• In the Greers Ferry Lake management area, any buck may be legally harvested during the deer muzzleloader mobility-impaired permit hunt.

• In Hobbs State Park Conservation Area, the Nimrod Lloyd Millwood area and Johnson County refuge in the Dardanelle area any buck may be legally harvested during the deer modern gun mobility-impaired hunt.

Modern guns may be used for deer except:

• shot smaller than No. 4 buckshot in any shotgun.

handguns with barrels shorter than 4 inches.

• Modern guns, muzzleloaders or archery equipment may be used during modern gun seasons.

• Hunters can carry only muzzleloaders and archery equipment during muzzleloader deer or bear seasons.

• Hunters can carry only archery equipment during archery deer and bear seasons.

• Hunters can use air rifles on small game.

• Firearms can be carried in Wildlife Management Areas, but can't be used for any hunting purpose unless the weapon is legal for that season.

• Hunters and those accompanying hunters in areas where modern gun or muzzleloader deer, bear or elk seasons are open must wear at least 400 square inches of hunter orange, chartreuse or blaze camouflage above the waist and a head garment of those same safety colors. Safety colors are not required for migratory-bird hunters in these areas.

Duck daily bag limit – six, which may include no more than four mallards (two hens), one scaup, three wood ducks, one pintail, two redheads, two canvasbacks, two black ducks, one mottled duck. If not listed, up to six ducks of a species (including teal) may be taken.

Duck hunting ends at noon. Shooting is allowed from 30 minutes before sunrise and ends at noon. Waterfowl hunters on Wildlife Management Area must cease all shooting at noon from Nov. 21- Jan. 30.

On Dec. 5 and Feb. 6 hunters 15 and younger, members of active duty military and military veterans can take ducks, geese, coots and mergansers.