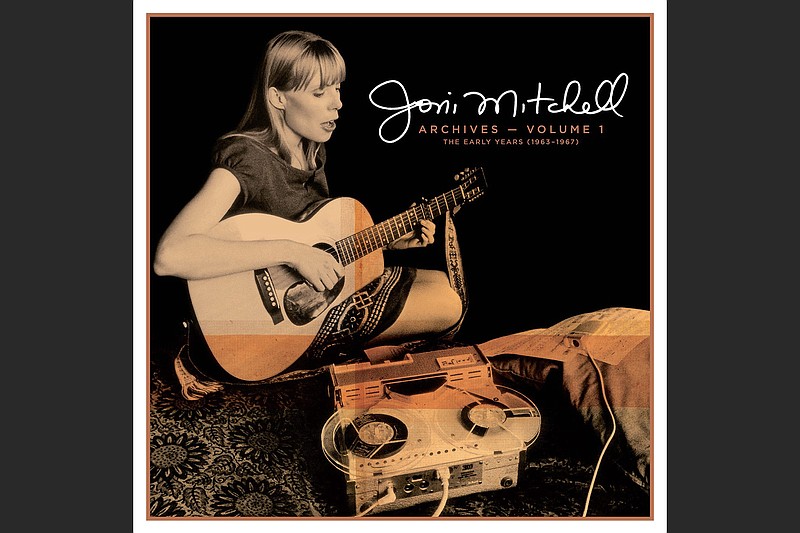 "The early stuff, I shouldn't be such a snob against it. A lot of these songs, I just lost them. They fell away. They only exist in these recordings. For so long I rebelled against the term, 'I was never a folk-singer.' I would get pissed off if they put that label on me. I didn't think it was a good description of what I was. And then I listened and ... it was beautiful. It made me forgive my beginnings. And I had this realization ...I was a folk singer!"

Polio was an unremarkable disease for most of its existence — it could cause paralysis and/or death, but the vast majority of people who contracted it were asymptomatic. It was only around the turn of the 20th century it began to be perceived as an epidemic in some western countries like the U.S. and Canada, where it seemed far more likely to strike children of the upper middle-class.

Eventually, the doctors figured out that higher standards of sanitation actually contributed to people contracting polio. The disease was typically spread by tainted water, and before the advent of modern plumbing and water treatment facilities, almost every baby contracted it soon after birth, while they were still protected by antibodies left over from their mother's bodies. These early harmless infections imbued the babies with lifelong immunity to the disease.

But babies born under sanitary conditions might be exposed to the polio virus years after the natural protection of their mother's antibodies had faded. (And if your mother had never been infected with the virus, a child would never have had the benefit of the early infant safe period in the first place.)

And about 1/10 of those cases cases progress to paralytic disease, in which the muscles become weak, floppy and poorly controlled, and, finally, completely paralyzed.

Joan Anderson was in some ways typical of the children who contracted polio during the early 1950s. She was born in 1943, in Fort Macleod, Alberta, where her father, Lt. William "Bill" Andrew Anderson, trained pilots at the Royal Canadian Air Force base there. Bill was of Norwegian ancestry, possibly descended from the indigenous Sami people who populate the northernmost reaches of Scandinavia. He was a trumpet player; for a while he led a marching band.

After the war, he got into the grocery business.

Anderson might have been flying combat missions against the Nazis had they not discovered, quite late in the process, his disqualifying color blindness. Her mother, Myrtle Marguerite née McKee, a teacher, was also color blind. So naturally Joan became a painter.

She was 9 or 10 when polio hit her. While other sources put it as the year before, she told the Canadian Broadcasting Corporation it was in November 1953, just after she'd turned 10 years old. She woke up and got dressed and looked in the mirror and saw that something had changed. "You look like a woman today," she told her interviewer she said to herself.

She started off to school but had to stop to rest on the way. Her muscles ached. She thought she must have contracted rheumatism, because her grandmother complained of rheumatism. The next morning she was paralyzed. They sent her to St. Paul's Hospital in Saskatoon. They called it a polio colony; all the kids quarantined together, in trailers. At night the iron lungs — the Emerson negative pressure ventilators — whooshed.

Nobody wanted to be put into one; there was a chance they would never come out.

Though by the time polio patients were in rehabilitation they were no longer infectious, the hospital still limited visiting hours. Joan's parents couldn't visit often; Myrtle brought a Christmas tree to try to cheer her up.

The girl did what they asked her to do. The therapist bent her back and wrapped her legs in scalding rags. Somehow the medieval tactics worked.

"I was very brave and determined and I walked," she told the CBC. "I came back a dancer."

By 15, the girl who would become Joni Mitchell was hanging out at the Saskatoon YMCA, going dancing nearly every Friday and Saturday night. She even instigated a Wednesday night dance because she couldn't wait for the weekend.

She'd lost some strength, some explosiveness, but dabbled in ballet and later in petty crime. Shoplifting. The usual bad-girl stuff that cost her her mother's trust.

She was an aloof teenager, artistic, fashionable but not one of those kids who get their identity from grades and conventional popularity. A self-described bad student, she hung out with rowdy boys and drank beer and recited dirty limericks. She started playing a ukulele because her parents denied her a guitar on the grounds that she'd just quit it, like she'd walked away from her piano lessons when she was 7 years old. She'd squabbled with a teacher who didn't like the idea of her making up her own songs. Not when she could have the music of the ages at her fingertips.

Who needed another pop song? Who needed that rock 'n' roll?

She did, for a while. She loved Chuck Berry, Ray Charles, Elvis Presley and the Everly Brothers. Then Elvis went into the Army; Berry went to prison. "Rock 'n' roll went through a really dumb vanilla period," she'd tell Cameron Crowe in the '70s.

"And during that period, folk music came in to fill the hole. At that point I had friends who'd have parties and sit around and sing Kingston Trio songs. That's when I started to sing again. That's why I bought an instrument. To sing at those parties. It was no more ambitious than that. I was planning all the time to go to art school." 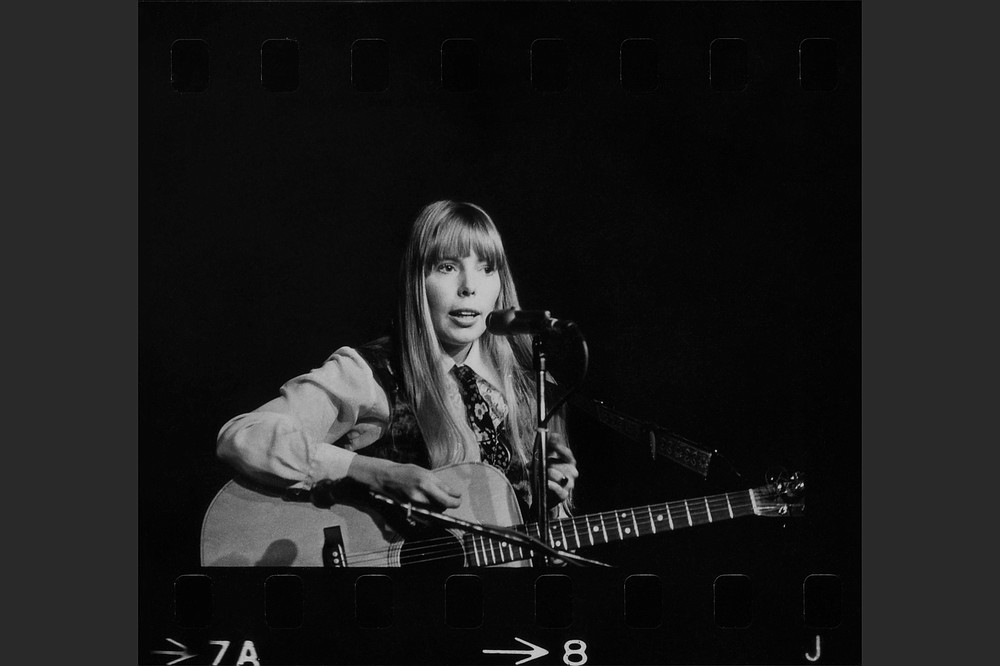 What you might not know, and what you might not care about, is how Joan Anderson became Joni Mitchell (her ex-husband Chuck Mitchell is still around, playing the occasional club date or festival, still marveling at her song-making and gin rummy skills).

If you are curious about those years, the apprenticeship Mitchell has sometimes dismissed as the folk scene-flailing about of a "squeaky girl on helium," then you might be fascinated by the nearly six hours of music that comprises the five CDs on the recently Rhino Records release "Joni Mitchell Archives — Volume One The Early Years: (1963-1967)."

The digital version can be had for $29.98, but the $58.99 CD iteration has the advantage of a 40-page photo booklet and transcript of a conversation between Crowe and Mitchell. Crowe has signed on to provide liner notes for the inevitable future releases in the series.

Liner notes for the vinyl releases are, respectively, by Toronto DJ Barry Bowman and Bob Franke, who worked as a doorman for the Canterbury House while also reviewing Mitchell's show for the Michigan Daily, the student newspaper of the University of Michigan.

As these things go, Mitchell's archives are interesting — at least to the sort of listeners inclined to seek them out. For the past few years (and probably longer) it's been easy to find footage of Mitchell's earliest television appearances on YouTube. She presents, through the grainy black-and-white scrim of nostalgia, as a folksinging archetype, a pellucid voice accompanied by a rudimentary acoustic guitar. Pretty girl, girl voice, pretty melody — even when the material is some old weird murder ballad from the Harry Smith anthology.

But this collection goes a long way to tracing the trajectory of Joan Anderson to Joni Mitchell as it allows us to hear, in something like real time, her evolution as a songwriter and maybe even more importantly a musician. It starts out with her plinking away on ukulele, covering folkie compulsories such as "House of the Rising Sun," Merle Travis' "Dark as a Dungeon" and Woody Guthrie's "Pastures of Plenty" and "Deportee (Plane Crash at Los Gatos)."

Performances are competent, tidy in a way we mightn't expect given what came later. There's a politeness to these covers, a modest prairie formality. And that continues through the set, though when the second disc kicks off with Mitchell's composition "Urge for Going," we sense the arrival of a formidable if not yet fully formed lyrical intelligence. The inimitable guitar stylings will come later. (The "weird Joni tunings" she arrived at partly in compensation for her strength-sapping polio bout are already apparent.)

It's by definition this collection is not peak Joni. Though there's plenty that hints at the glories to come ("Dr. Junk" is a throwaway song, but Mitchell paid that rhythm forward); the early versions of "The Circle Game," "Both Sides Now," "Chelsea Morning" are all works in progress.

There's a touching stilted quality to Mitchell's cover of fellow polio survivor Neil Young's "Sugar Mountain" (the song that inspired her to write "The Circle Game") that signals her respect of a great song, even if she doesn't agree with its philosophy. (The decision to include a lot of interstitial material — scraps of Mitchell talking to her audience or to various radio hosts — is a good one. The interludes provide context and warmth.)

Over the course of the set, Mitchell's voice darkens and expands, with her breathy soprano evolving into an instrument of remarkable range and emotive color. When the final side kicks off with a live version of "Little Green," Mitchell's yearning song for the daughter she gave up for adoption in 1964 when she was still just Joni Anderson walking out to Toronto polite applause, a pregnant prairie girl whose lover has just left for somewhere warmer, you finally glimpse the genius.

And you understand it's got her, like a virus.