Killings up across U.S., data show 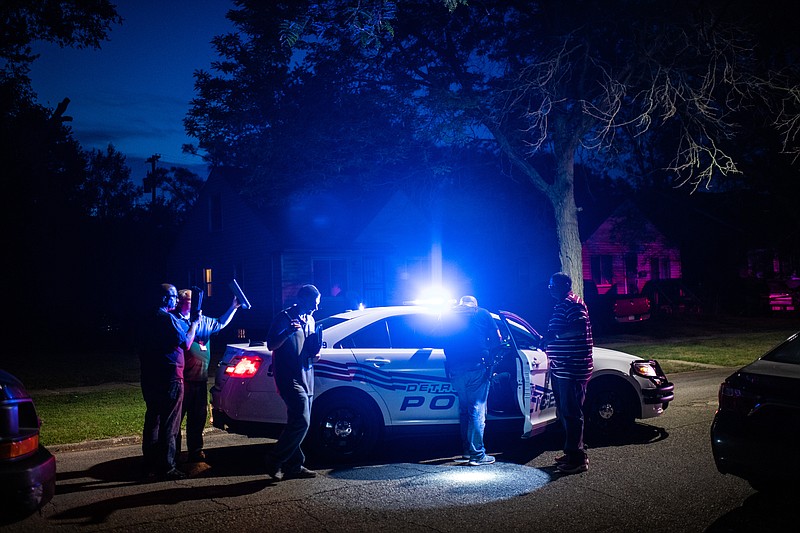 Detroit Police homicide detectives at the scene of a fatal shooting in 2018. MUST CREDIT: Washington Post photo by Salwan Georges.

In Greensboro, N.C., the violence has gotten so extreme that a shootout started in front of the county courthouse the other day, across the street from the sheriff's office, leaving a 20-year-old man dead. Greensboro set a city record with 45 homicides last year, and, as of Friday, already had 54 this year.

"We've always had a level of gang activity," Greensboro Police Chief Brian James said, "but it's more prolific now. I'm not sure what's changed, but the offenders are more bold than they've ever been."

Homicides across America rose more than 28% in the first nine months of this year, and aggravated assaults increased 9%, while rapes and robberies saw significant drops compared with the same period last year, according to statistics compiled this month from 223 police agencies by the Major Cities Chiefs Association and the Police Executive Research Forum.

Some police commanders say the twin impacts of the coronavirus and civil uprisings against police violence caused them to redirect their officers away from proactive anti-crime programs, whether because of virus-related budget cuts or strategic redeployment of forces to handle the unrest. Other officials point to job loss and other stresses of the pandemic as fueling tension and leading to violence. And with many schools shuttered, police say, many areas have seen a rise in violence involving juveniles.

Fort Worth saw a 66% increase in killings in the first nine months of the year, and Boston recorded a 52% jump. Cities that experienced tumultuous protests in the wake of police killings saw some of the highest homicide spikes: Minneapolis' total went from 33 in the first nine months of last year to 61 this year, an 85% increase. Louisville, Ky., has seen a 79% increase, Portland, Ore., a 68% increase, and Milwaukee's homicides have more than doubled, from 67 to 141.

"We haven't seen numbers like this since the '90s," said police forum Executive Director Chuck Wexler. "We've had 20 years of steady declines in crime. Is this just an aberration, or does this portend something for the future? This has been under the radar because of the pandemic, but something's happening across the country in the most serious crimes. The next administration, they're going to have to pay serious attention to this."

The Major Cities Chiefs first surveyed 67 big-city police departments, finding an aggregate 28.7% increase in slayings and a 10.6% rise in aggravated assaults, but a nearly 17% decline in rapes and a 10.5% drop in robberies.

The Police Executive Research Forum then obtained data from another 156 agencies, ranging from departments with fewer than 50 officers to those with more than 250. Combining the smaller jurisdictions with the larger ones from the Major Cities survey, the police forum found the numbers were the same: 28.2% rise in homicides, 9.3% increase in aggravated assaults, with similar double-digit drops in rapes and robberies.

In Kansas City, Kan., homicides have risen from 23 to 40, and aggravated assaults are up 75%. "People are in crisis," Wyandotte County District Attorney Mark Dupree Sr. said. "We've had so many people stuck in their homes, not going to work, not going to church. Just sitting idle, and like my grandmother used to say, 'Idle hands are the devil's workshop.' We're seeing people dying of silliness, for no reason. A year ago, we weren't seeing that."

About 73% of big cities reported decreases in robberies, and 86% have seen drops in rapes. "With fewer people out and about, there are fewer opportunities to commit robberies," Houston Assistant Chief Heather Morris told the police forum.

But Houston's homicide total is up 35%, and Morris blamed bail reform for some of that. "We had 28 suspects last year who were on bond or parole when they committed a murder," Morris said, "and this year we've had 44. The person who killed one of our officers a week ago was out on $100 bond for unlawfully possessing a weapon. ... Bond reform in some cases is needed, but you have people who allegedly committed violent crimes getting out on bond when they haven't in the past."