North Little Rock mayor hopefuls eager to get voters out 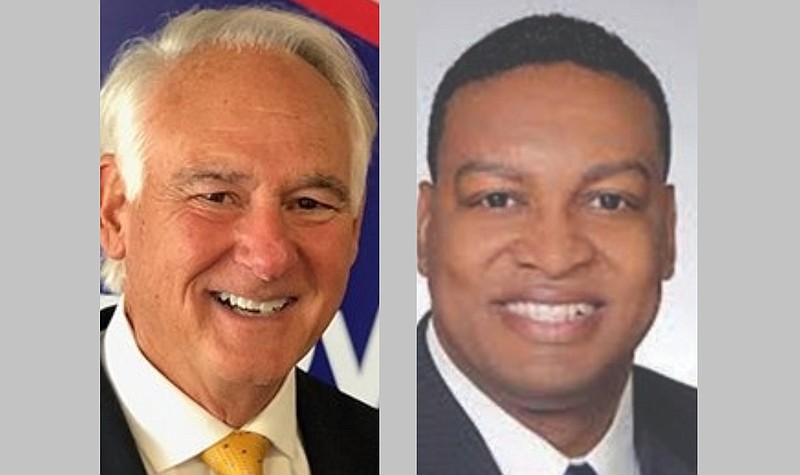 Early voting in the runoff election for the next North Little Rock mayor is scheduled to begin this week, and the two candidates have spent the past few weeks reminding voters about the upcoming race.

The race for mayor and Ward 3 are the two runoff choices on the ballot.

Early voting dates are Tuesday and Wednesday and on Nov. 30.

North Little Rock voters have the option to cast ballots at their assigned polling stations or at the William F. Laman Library at 2801 Orange St.

Tracy Steele and Terry Hartwick were the top vote-getters in the Nov. 3 election, which also included Alice Kunce, a teacher at Dunbar Middle School in the Little Rock School District, and Debi Ross, a City Council member who represents Ward 1.

The winner of the Dec. 1 runoff will succeed Mayor Joe Smith, who chose not to run for reelection and will leave office in January after two terms.

Steele, 56, is making his second run for the mayor’s office after losing to Smith in the 2012 runoff.

Steele is a member of the North Little Rock School Board and previously served in the state House of Representatives and the state Senate.

Hartwick, 71, was the city’s mayor from 1985-88 and is currently director of the Parks and Recreation Department.

Hartwick said that for the past few weeks, he has been using mailers, robocalls, texting and honk-and-wave campaigns to remind people about the runoff.

“We have looked into the figures and found that about 70% of voters show back up to vote in a runoff,” he said. “This will be a different time with the pandemic and deer season as well.”

Steele said he also has been reaching out to people all over the city to stress the importance of the runoff.

“A runoff after the presidential election is the most difficult time for a runoff,” he said. “We are using social media quite a bit to get people back out for this election. Local elections have more impact on your daily lives than the national election will.”

Steele said with this runoff the candidates will be dealing with election fatigue along with the pandemic and the holiday season.

“We have made tremendous progress in this regard,” he said. “We went from people not knowing about the runoff to people calling us every day trying to get details. The word is starting to spread now.”

Hartwick said he believes more people will vote in person in the runoff than did in the general election.

“I think some people haven’t even gotten their mail-in ballots yet, but I think more people will go in person because it won’t be as crowded,” he said.

Steele said he believes the number of mail-in votes will be about the same.

“If you voted by mail in the last election then you will automatically get the information in the mail so it makes you aware and gives you time to vote,” he said.

Hartwick said this has been a tough election because of the pandemic’s impact on campaign efforts.

“I am probably better one on one and up close to people, but this is what you have to do during this time,” he said.

Steele said he actually enjoyed this campaign time because he has been able to talk to people all over the city.

“I love this stuff,” he said. “It has been a good experience for me. I have gotten to talk to people I haven’t seen in a long time or that I went to school with. It has been good.”

Both candidates said their campaign messages haven’t changed much from the general election.

Hartwick said his experience with the Chamber of Commerce, as mayor and as parks director set him apart.

“People have seen the things that I have done successfully and can see my results,” he said.

Steele said his message is still about unity within the city.

“Our message is still one North Little Rock bringing our city together and moving our city forward,” he said. “We want to create jobs, better public safety and a government that is responsible and completely transparent. Want to get rid of the good old way of doing business.”

Noteworthy: Served as North Little Rock's mayor from 1985 to 1988. Served 15 years as president and CEO of the North Little Rock Chamber of Commerce. Served four years in the United States Air Force. Member of the Veterans of Foreign Wars.

Noteworthy: Served in the Arkansas House of Representatives and the state Senate. Foundation Board Member of the North Little Rock Boys and Girls Club

Both candidates said their campaign messages haven’t changed much from the general election.

CORRECTION: ​​​​​Tracy Steele is a Foundation Board Member of the North Little Rock Boys & Girls Club. An earlier version of this story provided an incorrect title due to incorrect information posted in a biography on the Arkansas State Legislators website.