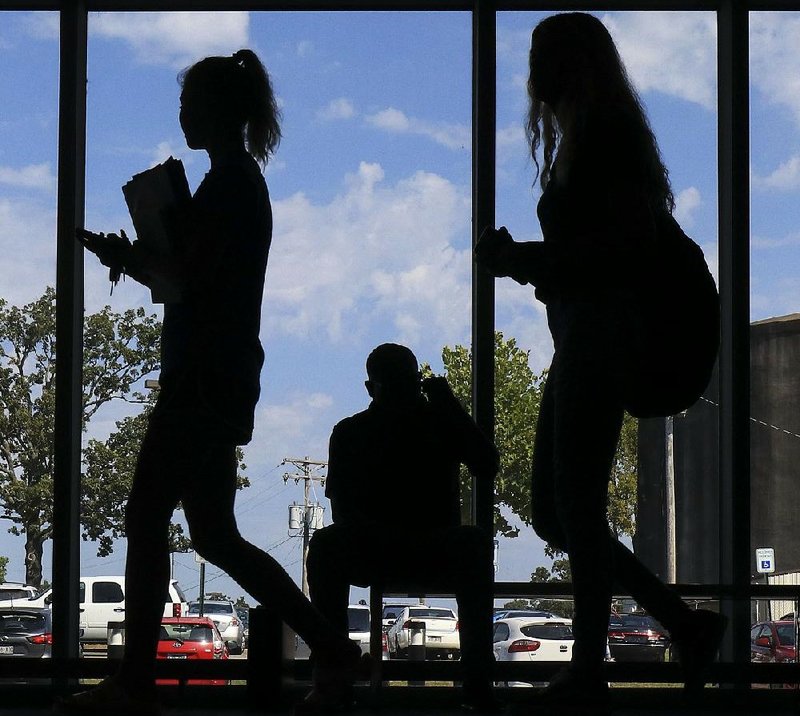 Students make their way to and from classes in the Center for Humanities and Arts building at the University of Arkansas-Pulaski Technical College campus in North Little Rock in this August 2019 file photo. ( Arkansas Democrat-Gazette / Staton Breidenthal)

The University of Arkansas-Pulaski Technical College received a $100,000 gift that will start a new fund aimed at improving diversity, equity and inclusion on campus, the college announced this month.

Carolyn and Doyle Rogers gave the money this month.

The money will start the CommUNITY Fund. For the next five years, the money will fund annual co-curricular programming at the college's Center for Humanities and Arts, a college news release states. The programming will celebrate and promote diversity on campus.

Doyle Rogers said in the news release that he and Carolyn Rogers are "particularly interested in bettering the world through social justice initiatives."

The CommUNITY Fund will also be used to help improve educational outcomes and opportunities, and may eventually provide scholarships to students "based on factors that promote diversity, including financial need, merit and socioeconomic factors," the news release states.

Arkansas State University has taken another step to start its Center for No-Boundary Thinking.

The university has named 22 faculty members from seven university colleges as "affiliate faculty" for the center, the university announced in a news release last week. Another three scholars -- from St. Bernards Medical Center, the New York Institute of Osteopathic Medicine at ASU and the U.S. Department of Agriculture -- will also be affiliate faculty.

The center is led by Xiuzhen Huang, a professor of computer science and an Arkansas Research Alliance Scholar. Huang's areas of interest include artificial intelligence and machine learning.

The Center for No-Boundary Thinking is a new university unit, approved by the Arkansas Higher Education Coordinating Board this summer, that aims to help determine the problems that need to be solved, "before rushing into research efforts," a university news release from July states.

Current priorities and faculty representation are focused on sciences. The center's three divisions, to start, include algorithms and computer methodology, advanced data science and learning, and biological systems. Some faculty affiliates will be from the humanities, however, with academics from history, political science, psychology and education.