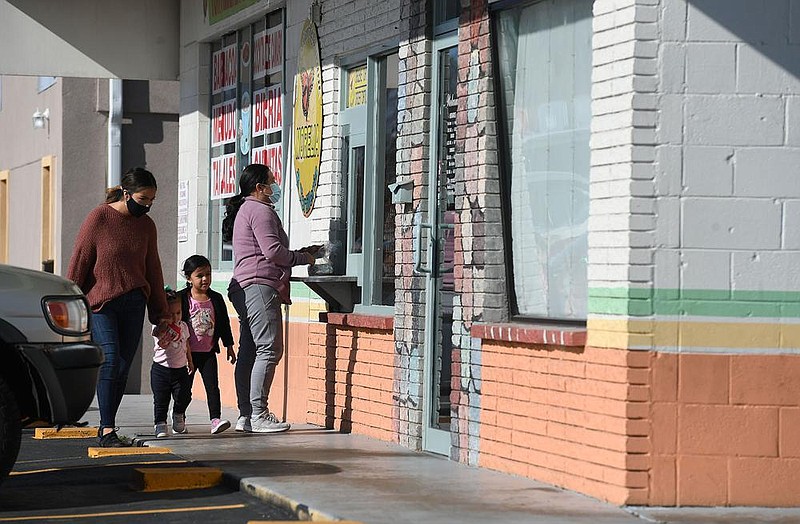 SPRINGDALE -- Demographic and cultural shifts have reshaped Springdale over the past 30 years.

Once considered a sundown town, Springdale is now the most diverse city in Northwest Arkansas, with the number of Hispanic residents approaching 40% of the city's population.

The impact is obvious throughout the city. Brightly colored businesses provide a festive backdrop to the shift from a Caucasian cowboy town to cultural melting pot.

"I think we're a better city for it," said Kevin Flores, who says he's the first Hispanic candidate to run for Springdale City Council.

Flores got 57% of the vote in the Nov. 3 general election to defeat incumbent Rick Evans in the council race.

But the race wasn't without controversy.

In July, Evans, who is white, was overheard during a live video broadcast before a council meeting saying his opponent was "some little Mexican lawyer."

Flores, a former Marine who was born in El Salvador, said he was personally unfazed by the comment.

But professionally, he was disappointed.

"What was disappointing was a city leader spoke like that out in the open, or behaved in that manner," Flores said. "That's what upset me. I can't change people's ways, but for a leader who was elected, that's disappointing."

Evans couldn't be reached for comment, but he publicly apologized after the incident.

Margarita Solorzano, executive director of the Hispanic Women's Organization of Arkansas, said Flores' election was significant in the history of Springdale."

Solorzano said Flores grew up in Springdale, moved away for college and military service, and returned to be elected to serve his hometown.

"I think that is very remarkable," she said. "People are ready to have diverse members on the City Council."

Besides Flores, another Hispanic person, Mayra Carrillo, and a Black man, Derek Van Voast, also ran for Springdale City Council this year, but they both lost their races.

"It's corrupt. It's racist. There's no other way to slice it," he said.

Van Voast said he wasn't referring to an overt, neo-Nazi type of racism. It's more subtle than that.

"I've told everybody: Springdale is not a racist city," Van Voast said. "We have a small group that holds lots of power that are extremely racist in an unconscious bias way in my personal opinion."

He cited church as an example. Van Voast said the powerful in Springdale usually attend Cross Church, the megachurch previously known as First Baptist Church of Springdale. They are inclined to vote for candidates who also attend that church, he said.

Many immigrants to Springdale are Catholic.

Van Voast said several people complained to the Springdale Police Department about campaign irregularities that included sign stealing and a possible physical altercation over signs. Those complaints are still under investigation, according to a Police Department spokesman.

"Springdale is kind of like the inner-city of Northwest Arkansas," he said. "I love this city. I love the community, and I love our brothers and sisters."

But the good ol' boy system is still entrenched politically, he said.

Irvin Camacho, a social activist in Springdale, filed a lawsuit against Evans saying his campaign distributed fliers falsely calling him an "outspoken anti-police protester" and linking every City Council candidate of color to Camacho.

In the fliers, the minority candidates for City Council were referred to as "The Camacho Candidates," and Camacho was described as a "liberal, progressive activist."

"At best, defendant Rick Evans' flier is an attempt to discredit all City Council candidates of color by asserting vague and frivolous connections to plaintiff Irvin Camacho," according to the lawsuit. "At worst, defendant Rick Evans' actions have advanced a message of incompetency to hold office in the city of Springdale on the grounds of race and skin color, all amid subtle and explicit lies against plaintiff Irvin Camacho."

By publishing false statements about Camacho and asking voters to reject the candidates in the flier, "the defendants encouraged others not to vote for any individual of color in the Springdale City Council race," according to the lawsuit.

Camacho dropped the suit on Nov. 10.

Victor Rojas, Camacho's attorney, said neither he nor Camacho could talk about the case because of a pending motion involving attorney's fees. Evans' had filed a motion seeking attorneys fees, claiming the lawsuit was "commenced to harass, intimidate or punish the defendant."

Springdale Mayor Doug Sprouse said the divisive political environment has trickled down from the national level.

"I think it was just a tough and divisive year," he said. "If you weren't divided by race, you were divided by something else."

Sprouse, who is white, said Springdale has welcomed diversity.

"I can't imagine any community handling change better than Springdale has," he said. "And it's been a rapid change. People are resistant to change. We all are. I'm very proud of Springdale for the way they have welcomed and adapted and accepted the change."

Sprouse said he disagreed with allegations that the city hadn't diversified quickly enough. He said several minorities have been appointed to city boards and commissions. But ultimately, it's up to the voters to decide who's on the City Council.

"This knock against Springdale or against our City Council, I think, is sometimes misplaced, that we don't embrace or encourage diversity," he said. "Facts just don't bear that out."

Historically, Springdale was known for its Rodeo of the Ozarks, founded in 1945, and a laissez-faire attitude toward city planning.

Wrangler-wearing locals could spot foreigners from Fayetteville because their bluejeans were Levi's.

"What makes Springdale Springdale is our blue-collar identity," said Flores, who moved to Springdale in 1995, when he was in first grade.

"Fayetteville was always the college town and a bit more progressive because of that," Cate said. "Benton County was more conservative because of Walmart. Springdale has always been the blue-collar town.

Springdale recently annexed the town of Bethel Heights to the north. Flores said Springdale probably has 85,000 residents now, and it will be the first city in Northwest Arkansas to reach 100,000.

Sgt. Robert Sanchez with the Springdale Police Department said his family moved there from Albuquerque, N.M., in 1970, just before he started first grade.

His father, Albert Sanchez, worked for Ralston Purina, the animal feed company, and was transferred to Springdale, which had a Ralston Purina plant at the time.

The plant closed, but the Sanchez family stayed in Springdale.

"My parents liked Northwest Arkansas so much, we just stayed and he found another job to keep us here," Sanchez said.