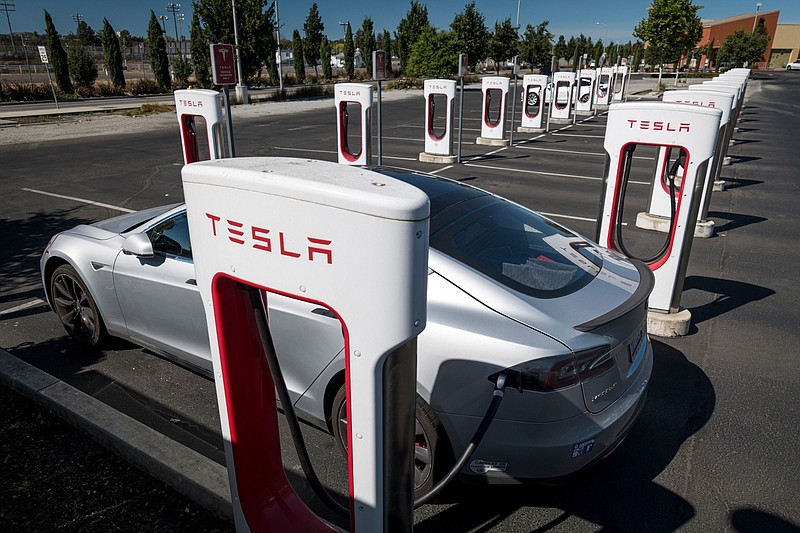 A Tesla vehicle charges at a Tesla Supercharger station in Petaluma, Calif., on Sept. 24, 2020. MUST CREDIT: Bloomberg photo by David Paul Morris

Tesla Inc., Elon Musk's 17-year-old upstart carmaker, took a giant step toward blue-chip respectability recently, getting named to one of the world's most famous stock indexes in an action that will greatly broaden its investor base.

The announcement that Tesla will enter the S&P 500 on Dec. 21 follows months of speculation, and one temporary setback, after the stock failed to make the cut during the index's quarterly rebalancing in early September.

The anticipation has helped drive a nearly fivefold rally in the stock this year to almost $390 billion, making the electric vehicle pioneer the biggest company ever to be added to the gauge. It will also be one of the index's most influential constituents with a weighting that falls around those of Berkshire Hathaway Inc., Johnson & Johnson and Procter & Gamble Co.

It's so big that S&P Dow Jones Indices said it is seeking feedback from the investment community to determine if Tesla should be added all at once or in two separate pieces. The company that Tesla is to replace in the index will be named later, the index provider said.

The news of S&P 500 inclusion "will of course likely drive a rally in the stock today," JMP Securities analyst Joseph Osha wrote in a note to clients last week. "We think there is still upside," he said, adding that Tesla should be valued like other "category killer" companies such as Apple Inc., instead of compared with other car companies. Osha reiterated his market outperform rating and price target of $516. Tesla shares jumped 12% in premarket trading to $456 on the news.

"This was a little unexpected happy day for me," said Ross Gerber, chief executive officer at Gerber Kawasaki Inc. Tesla is the top holding for the Santa Monica, Calif.-based wealth management firm, with approximately 130,000 shares worth about $55 million as of Monday's close.

After analyzing the index earlier this month, "it was just kind of mind blowing that Tesla still wasn't in the S&P," Gerber said in a telephone interview. "So sure enough, here it is."

While entry into the benchmark is a rite of maturity that may dim some of Tesla's cult stock appeal, membership comes with benefits, including forced purchases by index-tracking investors and mutual funds.

The inclusion and the rapid rally over the past few months mean money managers overseeing passive funds will have to sell tens of billions of dollars worth of shares in their existing S&P holdings to make room for Palo Alto, Calif.-based Tesla. On the other hand, longtime investors looking to exit their positions may now try to get out, knowing that index funds have to buy.

These crosscurrents may mean more trading volatility, though that is not new for Tesla. Ever since going public in 2010, the company's popularity with Musk acolytes and legions of day traders has made it one of the more volatile stocks of its size in America. A steadier, more institutional ownership base could help to eventually ease those swings.

Tesla has solidified its position as the leading electric carmaker globally, even though competition is slowly heating up. It has overcome challenges, including sometimes-severe production snarls, a large cash burn rate and concerns about the demand for battery-powered vehicles in an industry dominated by gas-powered cars. In mid-September, Tesla reported a fifth consecutive quarterly profit, quieting critics who questioned its ability to make money.

Indeed, all it had taken was Musk hinting at the second-quarter profit -- the company's fourth consecutive profitable quarter -- in a letter to employees in late June to trigger a 66% surge in the stock over a span of 17 trading days, since the results checked off the last requirement for S&P 500 inclusion.

Tesla's sky-high share price also prompted a 5-for-1 stock split, a move aimed at making it more accessible to individual investors. The shares started trading on a split-adjusted basis on Aug. 31.

"We believe the sustained profitability trajectory as evidenced in the September quarter was the final straw that got Musk & Co. into the S&P 500 this time around," Wedbush Securities analyst Daniel Ives wrote in a note to investors. He has a neutral rating on the stock.

Joining one of the world's most exclusive clubs is a validation for Musk and his unorthodox management style. His chief lieutenants are little known and rarely made available to the media or investors, and Musk courts controversy like few other corporate captains. He has picked fights with securities analysts, smoked marijuana during an interview and been sued for fraud by securities regulators for tweets claiming that he had "funding secured" to take the company private.

He also has complained more than once that Tesla's stock price is too high. But that hasn't deterred investors.

Tesla has tapped into that investor goodwill with multiple secondary share offerings over the past decade, raising $14 billion through February and another $5 billion in September. That's helped it fund new vehicle development and rapidly expand manufacturing capacity.

Musk's latest mission is to make Tesla more of a global player in markets such as Asia and Europe. The automaker recently opened a plant in Shanghai and is building a factory in Berlin, which Musk visited last week for meetings with local officials. Tesla also has a second U.S. plant under construction near Austin, Texas, which is expected to expand the company's model range to include a pickup called the Cybertruck.

Musk is intent on cementing first-mover advantage in the market for electric vehicles as the entire auto industry shifts to embrace electric powertrains, and his company's valuation on Nov. 13 was larger than Volkswagen AG, Toyota Motor Corp. and General Motors Co. combined.

While Tesla is being rewarded by investors for dominating the global electric-car market, demand is still a small fraction of new vehicle sales -- amounting to less than 3% of U.S. sales last year. That presents plenty of growth opportunity, but illustrates the challenge of making battery-powered cars more of a mainstream choice.

Still, the company's recent success and its burgeoning valuation has also forced a spotlight on the entire electric vehicle space, sparking a surge in shares of several new entrants, some of whom still have a ways to go before production begins. Shares of China's Nio Inc. rose 44% in October, and the company currently commands a market value that is bigger than GM.