U.S. pavilion at Dubai's Expo all sparkly but got helping hand 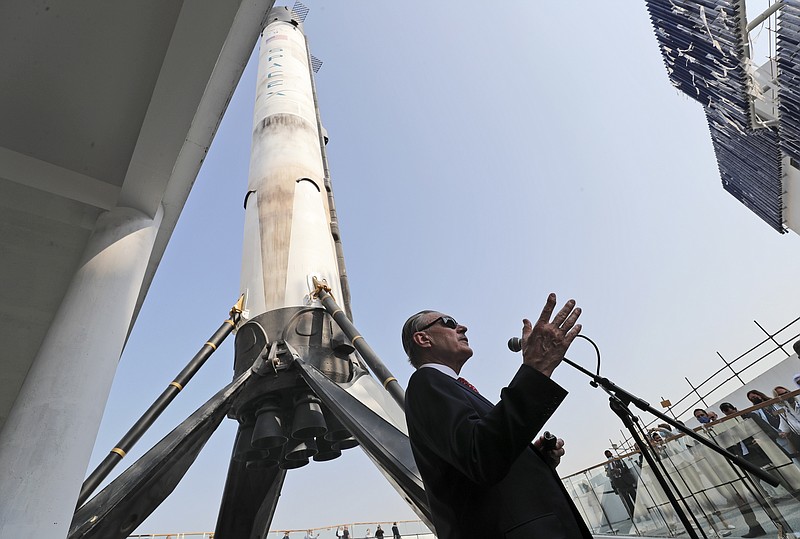 U.S. Ambassador John Rakolta talks in front of replica of the SpaceX Falcon 9, during the U.S.A Pavilion handover ceremony at the Dubai Expo 2020, United Arab Emirates, Wednesday, Nov. 18, 2020. The U.S. showed off a literally star-studded pavilion Wednesday for Dubai's upcoming Expo 2020, complete with a replica SpaceX rocket body beside it. (AP Photo/Kamran Jebreili)

Two fog machines swirled smoke around the replica, trying to lend the impression it just landed at the still under-construction Expo site in Dubai's southern desert. But what will be a major draw at this world's fair remains in question as the world struggles through the coronavirus pandemic and global air travel, a key industry for Dubai, struggles to take off.

Dubai's Expo 2020, or world's fair, represents a $7 billion bet by the sheikhdom in the United Arab Emirates that the event will boost tourism and business interest. The pandemic forced organizers to delay the start of the event by a year to Oct. 1 next year -- putting even more pressure on the expo to turn around Dubai's economy, which had been struggled even before the virus.

That extra time came in handy for countries participating in the event, particularly the U.S. The American contingent struggled to come up with funding for its pavilion and ended up relying on what it called "the generosity of the Emirati government" to cover its estimated $60 million cost. The pavilion's exterior appeared finished last week, but its interior remained a work site.

John Rakolta, the U.S. ambassador to the UAE, made a point to repeatedly praise the UAE government for its donation, without offering a figure for the final cost. Asked if that donation would influence what the U.S. displayed, Rakolta called the UAE "open" and "inclusive."

"They've encouraged us to reach for the stars," Rakolta said.

The 36,000-square-foot pavilion will include a "24-minute experience" of America with moon rocks, a Mars rover and Thomas Jefferson's Koran, Rakolta said. What an American experience means also could be open to interpretation for a Middle East audience, particularly after years of travel bans targeting predominantly Muslim nations and tensions with Iran under the current Trump administration.

"The United States is a melting pot of cultures from all over the world, and there's always going to be tension," Rakolta said "The strength of America is after a hard-fought election to come back together to the middle and to be able to bridge some of the differences that we have."

Rakolta, a Republican appointed by Trump, added: "You only agree with about 80% of what even your own party might have to offer."

The pandemic also remained at the front of people's minds as attendees all wore government-mandated masks and hand sanitizer stood at the ready. Rakolta said the American pavilion's construction had so far avoided having a worker contract the coronavirus.

It remains unclear what the effect of the virus across the wider Expo construction site has been. Expo 2020 offered no officials to speak to reporters invited for the visit. Officials from the Expo also tried to have journalists sign forms that implied they could face criminal prosecution for not following their orders and refused to allow filming of workers on the site.