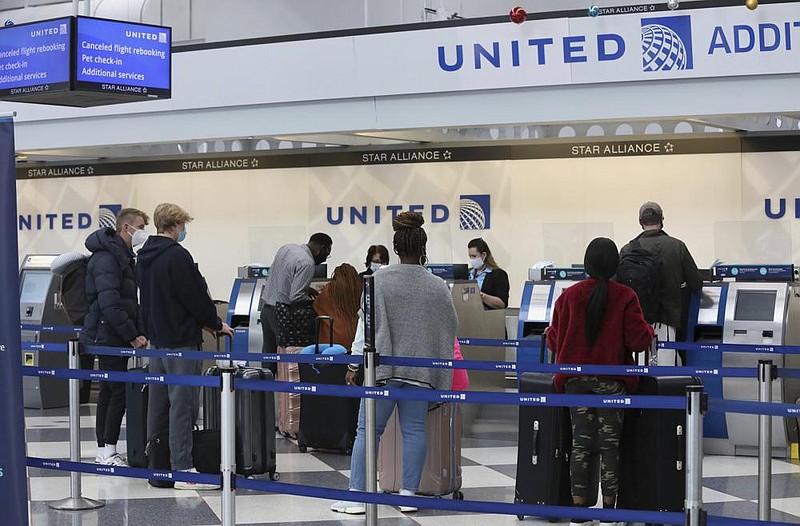 WASHINGTON -- With nationwide coronavirus hospitalizations topping 80,000 and case counts on the cusp of 200,000 a day, officials and experts are giving their final pleas for caution in the days before Thanksgiving.

As of Saturday, average cases reported each day in the United States had spiked more than 17% in a week, according to data tracked by The Washington Post. Deaths are also on the rise, with some communities overwhelmed by the bodies. In El Paso County, Texas, the National Guard was called in to help the morgues.

With the holiday travel rush underway, public health leaders cautioned that "herd immunity" from promising vaccines remains months away and that every American's choices this week will shape the country's virus trajectory.

On CBS News' "Face the Nation," Anthony Fauci, the nation's top infectious-disease expert, said he understands that many Americans are experiencing "covid fatigue" after months of pandemic restrictions, now tightening again in many parts of the country. But traveling over the holidays and ignoring public health guidelines are "going to get us into even more trouble than we're in right now," he said.

Moncef Slaoui, chief scientific adviser to the White House's Operation Warp Speed vaccine effort, said on CNN's "State of the Union" that about 70% of the American population will need to be vaccinated for true herd immunity to occur. That will probably happen around May, he said, based on health officials' current plans.

"Most people need to be immunized before we can go back to a normal life," he said.

But, said Slaoui, a former head of GlaxoSmithKline's vaccines operation, "On the 11th or on the 12th of December, hopefully the first people will be immunized across the United States, across all states, in all the areas where the state departments of health will have told us where to deliver the vaccines."

[Video not showing up above? Click here to watch » https://www.youtube.com/watch?v=qq4yh-tnnWo]

Fauci agreed: "If you get an overwhelming majority of people vaccinated, with a highly efficacious vaccine, we can reasonably quickly get to the herd immunity that would be a blanket of protection for the country."

Slaoui also told CNN that "it would be better" if President Donald Trump's administration formally allowed the presidential transition to begin.

Even so, the operation "has been isolated from the administration, from the political environment, and the political context," Slaoui said on NBC's "Meet the Press."

"All decisions are made, the train is running," he said. "Whether one administration or the other doesn't, frankly, make a difference."

Yet information isn't being shared with President-elect Joe Biden's administration, he said, consistent with Trump's failure to acknowledge his election loss.

Some on the front lines of the country's pandemic response are not sure that months of messaging have gotten through to the public. The Centers for Disease Control and Prevention advised Americans against Thanksgiving travel and get-togethers just days ago, when many people's plans were already set.

"Absolutely not," said Utah physician Sean Callahan when asked whether the urgency of the country's situation has sunk in. He said soaring cases are straining the quality of care at the University of Utah, where he works in one of the hospital's intensive-care units and is an assistant professor of pulmonary and critical care. His own message for people is about more than Thanksgiving plans.

Callahan said he is concerned that nurses and doctors are already being asked to treat patients outside their usual areas of expertise, and he thinks the problem will worsen.

"I'm worried that we are going to be asking a lot of providers to do things that are probably outside of their comfort zone, and care is going to suffer, because we're stretched and doing things we should not be doing," he said Sunday.

The pressure on health-care resources has spurred leaders nationwide. Utah Gov. Gary Herbert, a Republican, is mandating face coverings statewide in public settings and for people within 6 feet of anyone outside their household. The reversal, after months of reluctance, came after hospitals warned that they might have to ration care.

"If you look at the map of spread across the country, you can see the risk; it's very visible. And moving through airports or travel hubs, I think that will increase people's risk," Tom Inglesby, director of the Johns Hopkins Center for Health Security, said on "Fox News Sunday." "Even if they're driving from point to point, unfortunately, we don't know if we're infected when we walk into a gathering."

He referred to recent data released by the CDC that said most infections are spread by people with no symptoms.

For those who plan to travel and be with others for the holiday, he recommended keeping gatherings small, spending as much time outdoors as possible, keeping mealtimes short, wearing masks indoors and removing masks only while eating.

More than 1 million people went through Transportation Security Administration checkpoints in airports nationwide Friday, and more than 980,000 travelers were screened Saturday. The number of travelers screened Friday was the second-highest total since March 16.

The country's top health officials are telling people not to let their guards down and to continue heeding calls to socially distance, even as they are full of optimism about vaccine candidates.

[Video not showing up above? Click here to watch » https://www.youtube.com/watch?v=JvYO1xHTJL4]

"Traditionally and historically, highly efficacious and effective vaccines have crushed epidemics like smallpox and polio and measles," Fauci told "Meet the Press." "We can do that with the vaccines that are going to be coming online. So we should make them be ... an incentive to have us double down even more with public health measures until we get the full component of the help that's on its way."

Slaoui, the Operation Warp Speed adviser, said the federal government will be ready to start shipping vaccines within 24 hours after a candidate receives emergency authorization from the Food and Drug Administration.

He noted that the CDC and its Advisory Committee on Immunization Practices must review the data and recommend who should get immunized first.

"We will have the vaccines there the next day after approval, and, hopefully, people will start to be immunized, I would say, within 48 hours from the approval," Slaoui said on ABC News' "This Week."

He was referring to a several-step process for the vaccine roll-out. Once the FDA authorizes a vaccine, the government plans to pre-position doses to sites that states have designated as the places where shots will be given first. That is expected to happen within 24 hours of FDA action.

A day or two after the FDA action, the advisory committee is expected to vote on final recommendations for who should get the vaccine first. Those recommendations can be sent immediately to the CDC director, and once the director approves them, the vaccination process can begin.

However, only about half of adults say they would get a covid-19 vaccine if one were available, according to a September survey by the Pew Research Center.

It's "unfortunate that the vaccine process has become politicized," Slaoui said.

Regeneron's treatment was given to Trump last month after he contracted covid-19. While Trump received a number of drugs, he said after he was released from the hospital that he expected speedy authorization of Regeneron's therapy, crediting it with his recovery.

The company said Saturday that its therapy, called REGN-COV2, had been authorized for the treatment of mild to moderate covid-19 in adults and some children 12 and older. A similar antibody therapy made by Eli Lilly & Co. received emergency clearance from the FDA on Nov. 9.

While antibody therapies have been hailed by Fauci and others as a potential bridge to a vaccine, their emergency clearance comes at a time when the spike in cases and a strained virus-testing system are running up against what is expected to be a limited supply of the therapies.

Promising vaccine news has some small-business owners feeling more upbeat, and hoping consumers and businesses will be more relaxed about spending. Some owners are rethinking their plans -- some are holding off on staff cuts, while others say they're more likely to renew their office leases even as employees still work from home.

But the owners also realize many hurdles remain.

John Ross had been concerned about his company's revenue slowing in the coming months, so he contemplated moving three of his 10 employees to part time and giving up his office when the lease is up for renewal in March. News about a vaccine has encouraged Ross, CEO of online educational company Test Prep Insight, to hold off on any major changes.

"I fully expect this vaccine news to give consumers the same jolt of confidence that I have felt. This hopefully means a quicker and strong recovery," says Ross, whose company is based in Auburn, Calif.

Ross has kept revenue stable by offering discounts. With those expiring soon, he was worried that students and their parents would have less incentive to buy. Many tests were canceled in the early months of the outbreak, and it's not known whether the virus's resurgence will lead to more cancellations.

Ross is more optimistic, but still cautious -- he won't decide for sure on his office lease until more is known about the vaccine.

The pandemic has hit small businesses particularly hard. They don't have the same cash reserves and access to lines of credit as larger businesses to help make up for a drop in revenue. While it's not known how many companies have permanently closed, based on an estimate issued by the National Bureau of Economic Research in the spring, the number is probably well into the hundreds of thousands. Additional government restrictions could put more companies at risk.

Gregg and Arlene Humble are caught in the tug of war. The vaccine news gives the couple hope that Humble Travel in Cedar Falls, Iowa, will reach its 60th anniversary in 2021. But they're also worried because revenue is just 10% of what it was before the pandemic hit.

The Humbles closed a satellite office in West Des Moines in July, laid off three employees and cut other costs when it seemed like there was no end in sight to the outbreak. They were able to get government help including a Paycheck Protection Program loan, and it helps that they own the building the travel agency is in. They're also in the process of setting up a second business they hope will support the travel company.

Gregg Humble believes people would start booking 2021 and 2022 trips if they expected to be vaccinated.

"Having a vaccine for covid-19 available makes a decision to keep Humble Travel open much more of a viable proposition," he says.

"If this drags past the end of March, and if you don't see a big uptick in business, it's going to be a lot more challenging," Humble says.

Graham Cooke and his business partner Jordan Griffith started Café Last, a retailer of espresso machines and coffee grinders for home and restaurant use, in the summer. They're selling online but have had to put off renting warehouse space and hiring people to staff it.

The vaccine news makes Cooke more optimistic about the future of the business, but also brings a new set of questions.

"With the news of a vaccine on the horizon, we need to make some serious decisions. Do we move into a storefront? Continue selling online? Even if there is a vaccine, will people even get it? What is the future of the restaurant industry?" Cooke says.