FG wasn't what Hogs were after 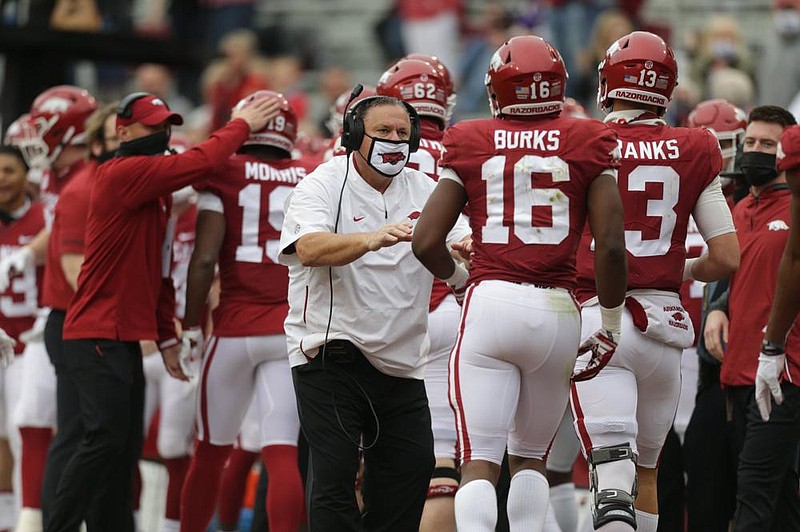 FAYETTEVILLE -- University of Arkansas Coach Sam Pittman was obviously disappointed in the Razorbacks' 0 for 10 third-down conversions in Saturday's 27-24 loss to LSU.

But the first failed third-down opportunity that came to mind during his postgame video conference was the most painful. It came from the LSU 2-yard line early in the fourth quarter with the Razorbacks hoping to extend their 21-20 lead with a touchdown.

On the third-and-goal play, quarterback Feleipe Franks looked to have three choices on a run-pass option. He could have handed to tailback Trelon Smith at the 5-yard line, pulled up and passed, or kept the ball heading left.

Franks chose the last of those options and wound up slipping and falling on his back on the 5-yard line.

"Any time you lose by three there's so many points in the game that can go one way or the other," Pittman said. "We had an opportunity to go up eight and we couldn't convert that third down, that specific one. Then we got a field goal and went up four. Certainly if we had went up eight then we would have put a lot of pressure on them."

Mike Woods is on a big-play streak after catching four passes for a career-high 140 yards against LSU. Woods has 2 touchdowns and 269 receiving yards on his last 6 receptions, which averages to 44.8 yards per catch.

"Give that man a nickname," SEC Network analyst Matt Stinchcomb said after Woods' second 50-yard catch to set up Trelon Smith's go-ahead touchdown late in the third quarter. "Big play Mike. All he does is catch balls down field."

[Video not showing up above? Click here to watch » https://www.youtube.com/watch?v=txvitnw7rU0]

Woods said the big plays are must-haves in the SEC.

Woods has improved his average to 20.5 yards per catch, highest on the team. His 553 receiving yards trails Treylon Burks by 45 yards for the team lead.

Woods said he looks for the go-route option when the Razorbacks see man coverage.

The Razorbacks caught a bad break when a brief downpour hit at the start of the fourth quarter. Arkansas had just moved to the LSU 6 on TJ Hammonds' 51-yard catch and 29-yard run when the intensity of the raindrops picked up.

Feleipe Franks snared a low Shotgun snap on first down when he threw out of bounds on the right sideline for an incompletion. After the play, Franks could be seen apologizing to tailback Trelon Smith for not seeing him on the left side, then he and center Ricky Stromberg both apologized to each other for the snap not going cleanly.

On second down, Franks corralled a high snap and completed a 4-yard pass to Blake Kern in the right flats. On third down, it looked as if Franks should have given to Smith at left guard on an option play. He kept it instead and slipped on the 5-yard line on the newly wet grass. Smith charged straight to the goal line before meeting the first LSU defender.

Kiffin made his choice apparent when a sports website made its case for naming him the SEC's coach of the year.

Kiffin retweeted the story, adding, "Not even close!! @CoachSamPittman 4 sure!!!!!!" Kiffin added a rat and a bottle of poison to his post, the symbols for positive news equating to rat poison, a line made famous by Saban.

Orgeron praised the work of the true freshman Finley, who completed 27 of 42 passes for 271 yards and 2 touchdowns.

"He's got ice in his veins," Orgeron said. "He showed he can win a big game at the end."

The Tigers had two weeks to put in their game plan, a ground-hugging effort on offense and less complicated on defense.

"We wanted to run the football," Orgeron said. "We wanted to be in manageable third downs. Short, easy throws. Take the shots when we could. We thought that we had some chances where we missed some shots."

LSU's dominance in clock control was no more evident than in a stretch to end the first half and start the second. The Tigers ran 20 consecutive plays during the two drives.

LSU got the opening kickoff in the third quarter and took 4:25 off the clock with a six-play, 14-yard drive.

After averaging 209 rushing yards per game in its last three outings against Texas A&M, Tennessee and Florida, the Razorbacks fell back to 104 yards against LSU.

Tyrion Davs-Price had 24 carries for 104 yards and averaged 4.3 yards per carry to lead LSU.

"I don't think they were doing anything too spectacular," Arkansas defensive tackle Jonathan Marshall said of LSU's run game. "I think we just have to fit gaps better and stuff like that. And we have to tackle at contact. That's the main priority."

Replay official Ken Switzer, in consultation with referee Marc Curles, deemed there was no clear fumble recovery after Joe Foucha raked the ball free of running back John Emery Jr. at the LSU 37 with 11:16 remaining in the second quarter.

As Curles was looking at the replay monitor, SEC Network analyst Matt Stinchcomb said, "To me this is clearly a fumble and the football was recovered by the Arkansas defense."

He was incredulous when Curles announced the ruling.

"That's clearly Arkansas' ball," he said. "That's a really bad call. I mean there's no other way to describe it. That's a clear recovery by the defense right there. I have no idea how that could have been arrived upon as no clear recovery."

Stinchcomb brought up the Bo Nix backward spike in Arkansas' game at Auburn, which was also recovered on second effort by Foucha. In that case, SEC supervisor of officials John McDaid told the Arkansas Democrat-Gazette that the loose ball was not recovered in the immediate continuous aftermath as officials blew their whistles and signaled incomplete pass.

Woods caught four passes for a career-high 140 yards, exceeding his previous personal best of 129 yards on two catches last week. The junior from Magnolia, Texas, had a pair of 50-yard catches that set up Razorback scores.

Morgan notched a game-high 19 tackles, his sixth game with 12-plus stops this season. The senior from Greenwood had 7 solo tackles, 1 sack for 5 lost yards, 1.5 tackles for loss, 1 quarterback hurry and 1 pass breakup.