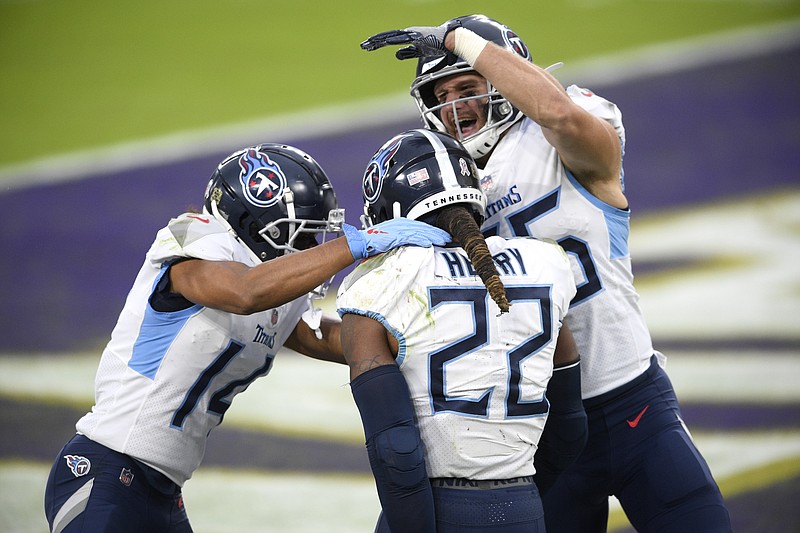 BALTIMORE -- For three quarters, the undermanned Baltimore Ravens put the clamps on Derrick Henry and the Tennessee Titans.

By the time if was all over, the star running back and Tennessee would again head out of Baltimore with a victory to savor.

Henry ran for a 29-yard touchdown with 5:21 left in overtime Sunday to cap another impressive performance against the Ravens and provide Tennessee with a 30-24 victory.

Heading into the fourth quarter, Henry had 44 yards on 18 carries and the Titans trailed 21-13. He finished with 133 yards on 28 carries -- his sixth 100-yard game of the season. His big day also put him over 1,000 yards for the third consecutive year.

"You could just kind of tell as the game wore on to the fourth quarter that we were wearing on them offensively," Titans Coach Mike Vrabel said.

It was reminiscent of Henry's outing last January, when he rambled for 195 yards to carry the Titans to a 28-12 upset of the top-seeded Ravens in the AFC divisional playoff.

"I try to do anything I can when the ball's in my hand to help our team win," Henry said.

This one didn't have the same win-or-go-home significance, but it was close.

"It's a violent game, a physical game, an emotional game," Vrabel said.

The harsh stare downs and trash talking began before the game and carried well into overtime.

"We kind of knew there was going to be some extra stuff coming into this game because of last year," Titans wide receiver Corey Davis said. "We tried to keep our poise and go out there and handle business."

After forcing a punt to begin overtime, Tennessee (7-3) moved 73 yards on six plays to get back on track after losing three of its previous four games.

"I had a ton of confidence that as soon as we got the ball we were going to march it down and get in the end zone," Titans quarterback Ryan Tannehill said.

Baltimore (6-4) has lost two in a row and three of four. Until the fourth quarter, the Ravens did a decent job of controlling Henry without injured defensive linemen Calais Campbell (calf) and Brandon Williams (ankle).

"We just didn't stop him," rookie middle linebacker Patrick Queen said. "We've been preaching that we have to play all four quarters and dominate."

Tennessee trailed 21-10 early in the third quarter and 21-16 late in regulation before launching a 90-yard drive featuring the running of Henry and some precise throws by Tannehill.

On third down from the Baltimore 14, A. J. Brown caught a short pass on the right side and broke four tackles before scoring while standing up with 2:18 left. Tannehill ran in the conversion to make it 24-21.

Lamar Jackson then drove the Ravens to the Tennessee 10 before Justin Tucker kicked a 29-yard field goal with 15 seconds remaining to force overtime.

Jackson went 17 for 29 for 186 yards and running back J.K. Dobbins, seeing the most extensive action of his first NFL season with Baltimore, ran for 70 yards on 15 carries and scored a second-quarter touchdown.

Baltimore went up 21-10 early in the second half on a 31-yard touchdown pass from Jackson to Mark Andrews.

The Titans used two field goals by Stephen Gostkowski to close to 21-16, setting the stage for a thrilling fourth quarter.

"First half, we were a little iffy," Davis said. "That last stretch was who we are."

Baltimore allowed the Titans to march 79 yards for a touchdown on their opening possession but bounced back to take a 14-10 halftime lead.

Henry had only 37 yards rushing on 13 carries in the first half. But his big second half provided Tennessee with a feel-good feeling heading down the stretch.

"We got to start doing things that will break us away from the pack," Vrabel said. "Today was a great step."

Baltimore's Dez Bryant had four receptions for 28 yards, all in the third quarter, his first catches in an NFL game since Dec. 31, 2017, with Dallas. The 32-year-old Bryant closed his career with the Cowboys after the 2017 season, tore his Achilles tendon in 2018 and was inactive last season. 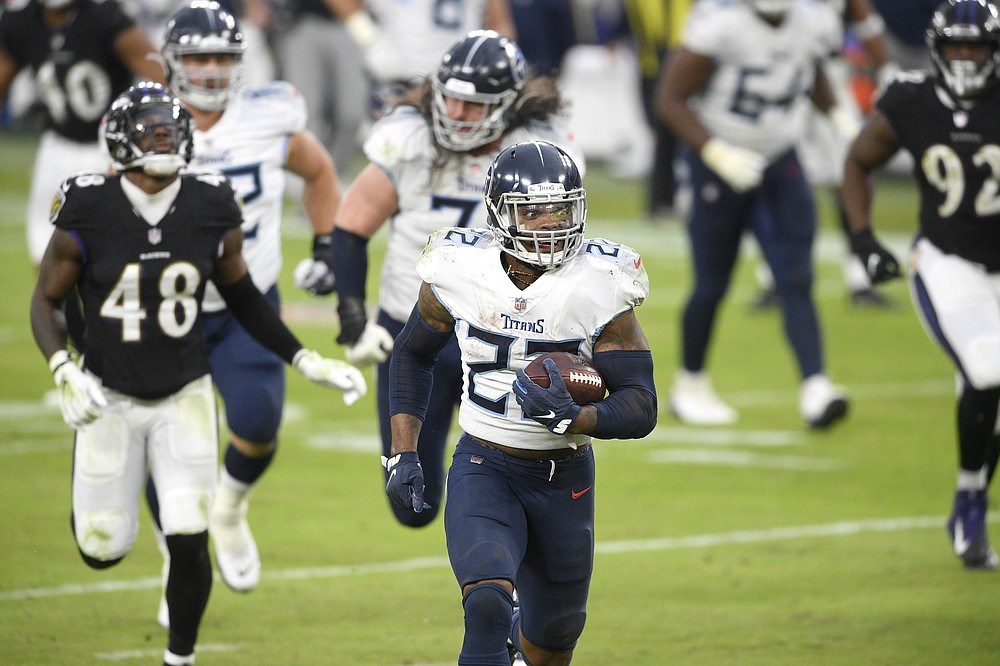 Tennessee Titans running back Derrick Henry (22) runs for a game-winning touchdown against the Baltimore Ravens during overtime of an NFL football game, Sunday, Nov. 22, 2020, in Baltimore. The Titans won 30-24 in overtime. (AP Photo/Nick Wass) 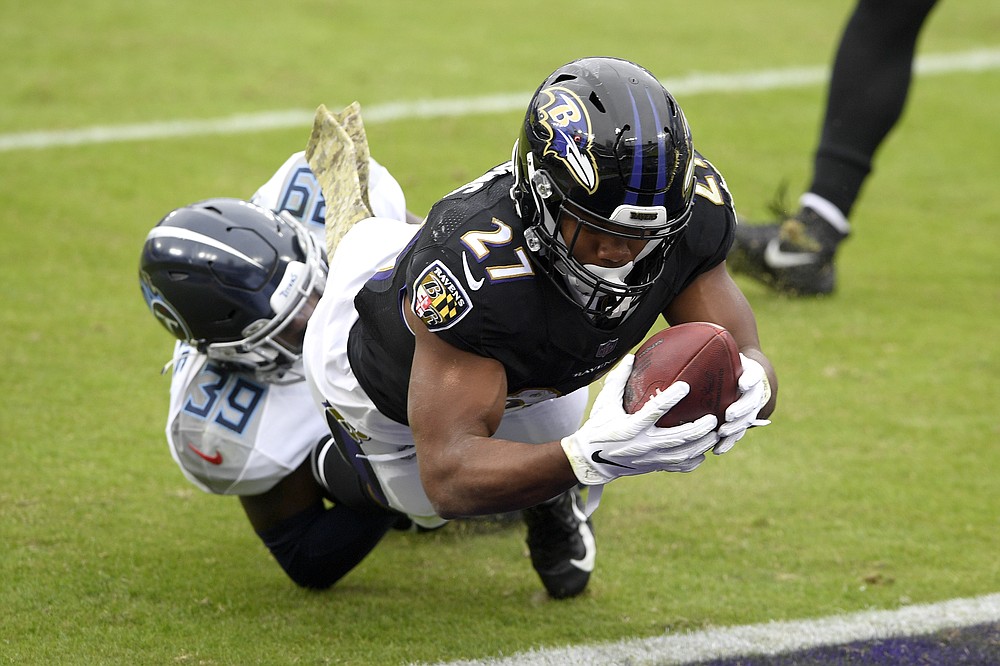 Baltimore Ravens running back J.K. Dobbins (27) dives into the end zone as Tennessee Titans cornerback Breon Borders tries to stop him on a 2-point conversion catch during the first half of an NFL football game, Sunday, Nov. 22, 2020, in Baltimore. (AP Photo/Nick Wass) 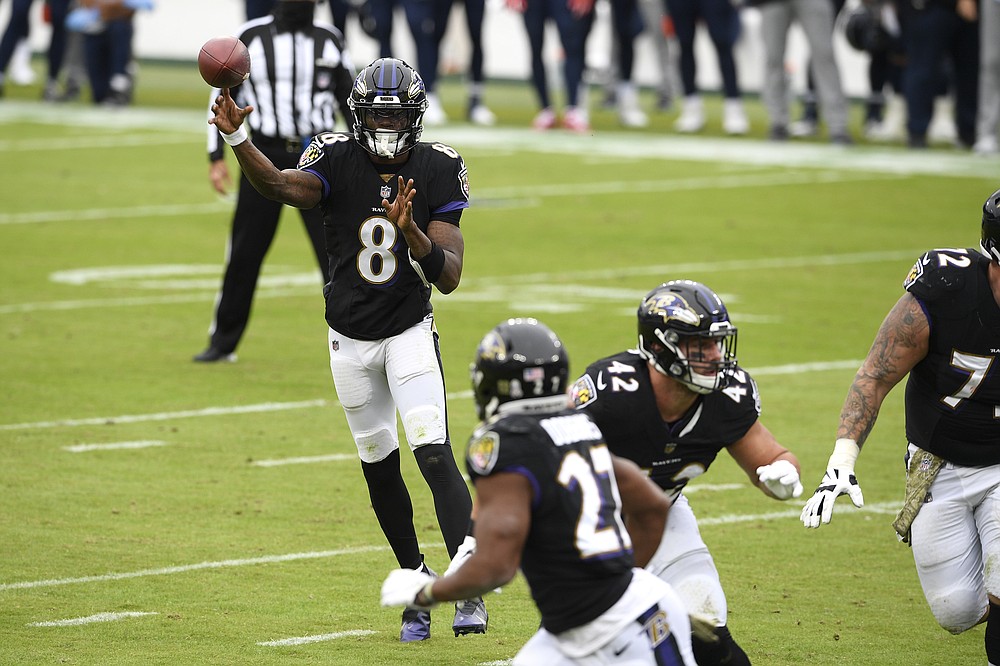 Baltimore Ravens quarterback Lamar Jackson (8) throws a pass to running back J.K. Dobbins (27) on a 2-point conversion play against the Tennessee Titans during the first half of an NFL football game, Sunday, Nov. 22, 2020, in Baltimore. (AP Photo/Nick Wass) 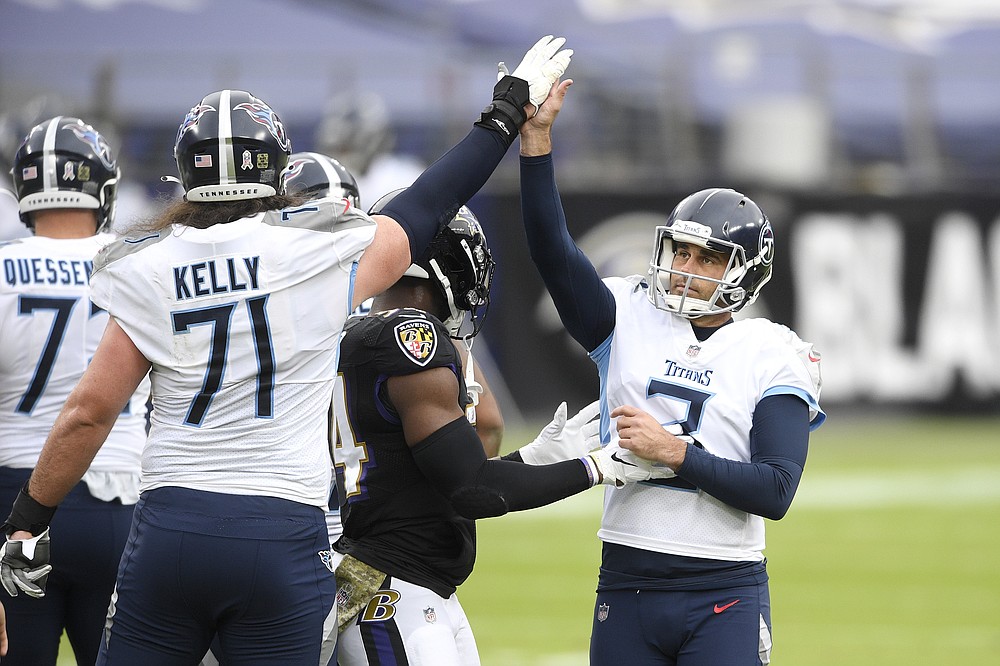 Tennessee Titans kicker Stephen Gostkowski, right, celebrates after kicking a field goal against the Baltimore Ravens during the first half of an NFL football game, Sunday, Nov. 22, 2020, in Baltimore. (AP Photo/Nick Wass) 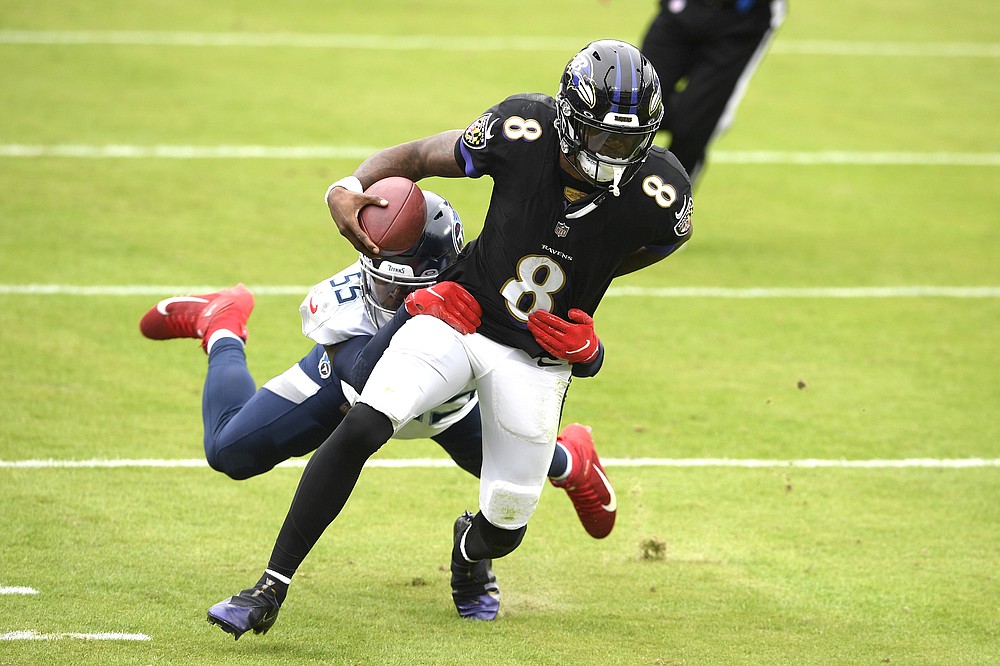 Baltimore Ravens quarterback Lamar Jackson (8) runs with the ball while Tennessee Titans inside linebacker Jayon Brown tries to stop him during the first half of an NFL football game, Sunday, Nov. 22, 2020, in Baltimore. (AP Photo/Nick Wass) 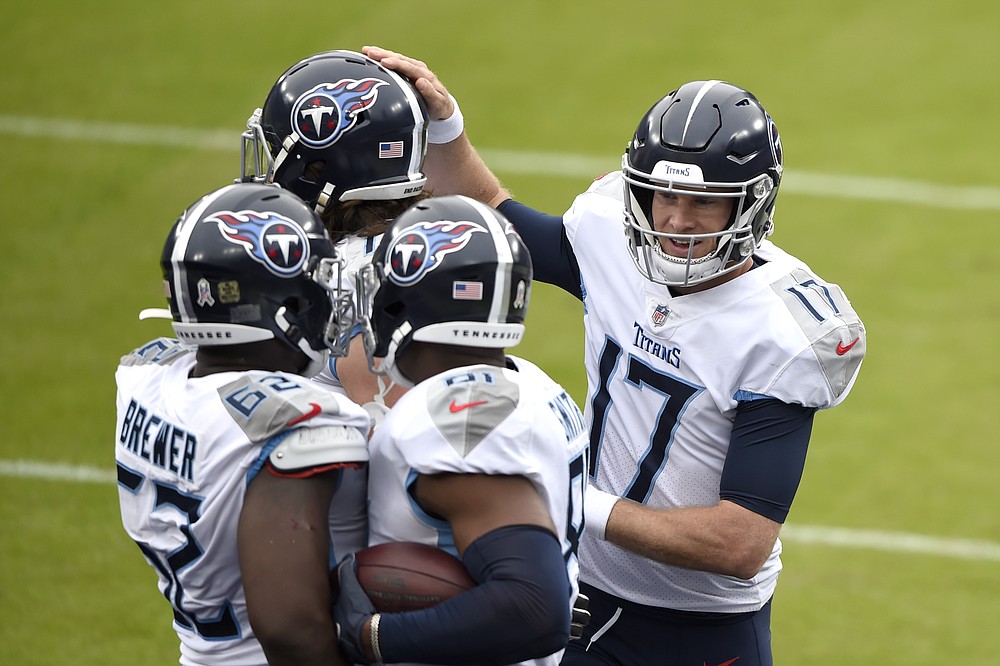 Tennessee Titans quarterback Ryan Tannehill (17) celebrates with teammates after he connected with tight end Jonnu Smith (81) on a touchdown pass against the Baltimore Ravens during the first half of an NFL football game, Sunday, Nov. 22, 2020, in Baltimore. (AP Photo/Gail Burton) 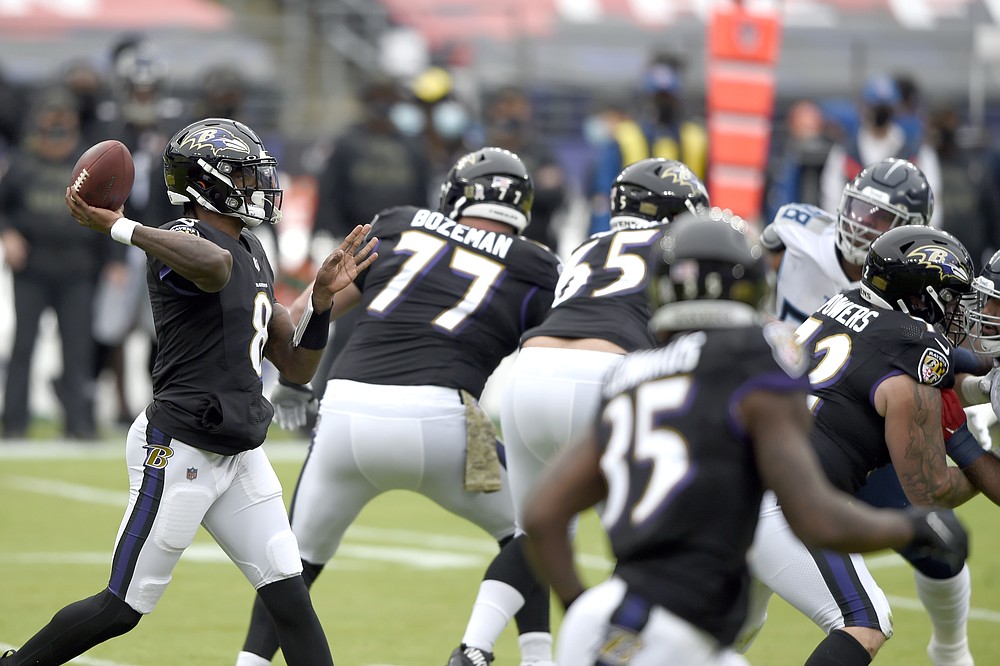 Baltimore Ravens quarterback Lamar Jackson throws a pass against the Tennessee Titans during the first half of an NFL football game, Sunday, Nov. 22, 2020, in Baltimore. (AP Photo/Gail Burton)
ADVERTISEMENT