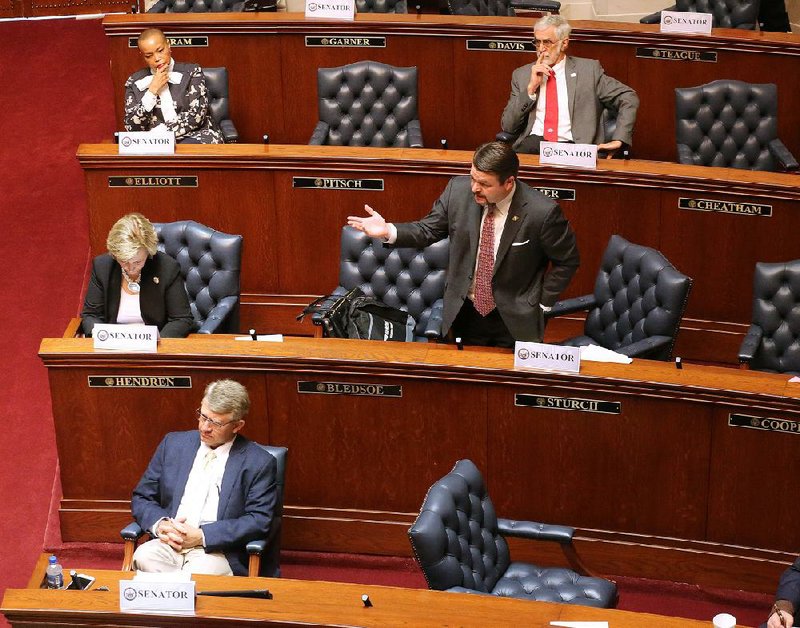 Republicans hoping to test the conservative lean of the U.S. Supreme Court filed legislation last week proposing an outright ban on abortions, in what they say is an attempt to force an end to the controversial procedure by having the justices rule on the issue.

The legislation, Senate Bill 6, was filed by state Sen. Jason Rapert, R-Conway, on Tuesday. The bill would ban all abortions except those to save the life of a mother or to remove an ectopic pregnancy. The bill does not provide exceptions for cases of rape or incest.

Rapert, who successfully ran legislation two years ago to trigger an abortion ban in Arkansas in the event the Supreme Court overturns its precedent affirming the right to have abortions in the case Roe v. Wade, said Friday that he believed Arkansas and other states were prepared to pass new laws to directly challenge Roe.

"This is the trigger," Rapert said. "This is a direct response to the 60 million-plus innocent babies who have had their lives taken."

The confirmation of Justice Amy Coney Barrett to the high court last month created a 6-3 conservative majority, boosting hopes from anti-abortion activists and lawmakers that the court would reverse its nearly 50-year-old precedent.

The legislation has already gained the support of the Arkansas Family Council, a faith-based advocacy organization whose president, Jerry Cox, predicted the law would almost certainly be challenged in federal court.

If a challenge were to reach the U.S. Supreme Court, Cox said it would give the justices an opportunity to provide "clarity" of how much leeway they are willing to give states to restrict abortion.

"It doesn't beat around the bush, it does what people in Arkansas have been saying should have been done for 40 years," Cox said in an interview Friday.

Arkansas lawmakers' past attempts to restrict access to abortion have faced legal challenges by abortion-rights groups such as the American Civil Liberties Union, which has successfully sued to block laws banning abortion at 12 and 18 weeks of pregnancy. The latter law is still facing an appeal.

"Let's be clear: If passed, this brazenly unconstitutional abortion ban will be struck down in court, and legislators who passed it will have achieved nothing but having wasted taxpayer dollars on an unlawful measure and diverted scarce resources from the urgent needs our communities face in the midst of an ongoing and devastating pandemic," ACLU of Arkansas Director Holly Dickson said in a statement Thursday.

There were 2,963 abortions performed in Arkansas during 2019, according to statistics kept by the Arkansas Department of Health. The vast majority of those procedures were performed at or before the 11th week of pregnancy.

The annual Arkansas Poll released last month by researchers at the University of Arkansas, Fayetteville, found that nearly a quarter of Arkansans supported making abortion illegal, while 59% said it should depend on the circumstances.

In this year's election cycle, Republicans zeroed in on key votes against anti-abortion legislation made by several rural, moderate Democrats and managed to pick up seats in both the House and Senate.

"The incoming Legislature might be a little more pro-life than the one that's there right now," Cox said.

Rapert sponsored the bill along with state Rep. Mary Bentley, R-Perryville, in the House.

Arkansas is one of 21 states that have laws on the books poised to restrict access to abortion beyond what federal courts now allow, in the event that Roe is overturned, according to the Guttmacher Institute, a research organization that advocates for reproductive rights.

Rapert said the addition of a sixth conservative justice to the U.S. Supreme Court would likely ensure that the court would roll back all or most of its Roe precedent, if presented with an appropriate opportunity to do so.

"I think they're looking for the opportunity to do that," Rapert said. "They have to have the right case or the right piece of legislation before them to do that."

In 2019, the Legislature passed Act 180, the so-called "trigger" abortion ban that would go into effect in the event that the Supreme Court overturns its decision in Roe v. Wade.

That legislation -- along with Rapert's current proposal, SB6 -- would impose a prison sentence of up to 10 years, along with fines up to $100,000, on a doctor caught performing abortions in violation of the law.

Women would not be subject to any criminal penalties for receiving an illegal abortion under either law.