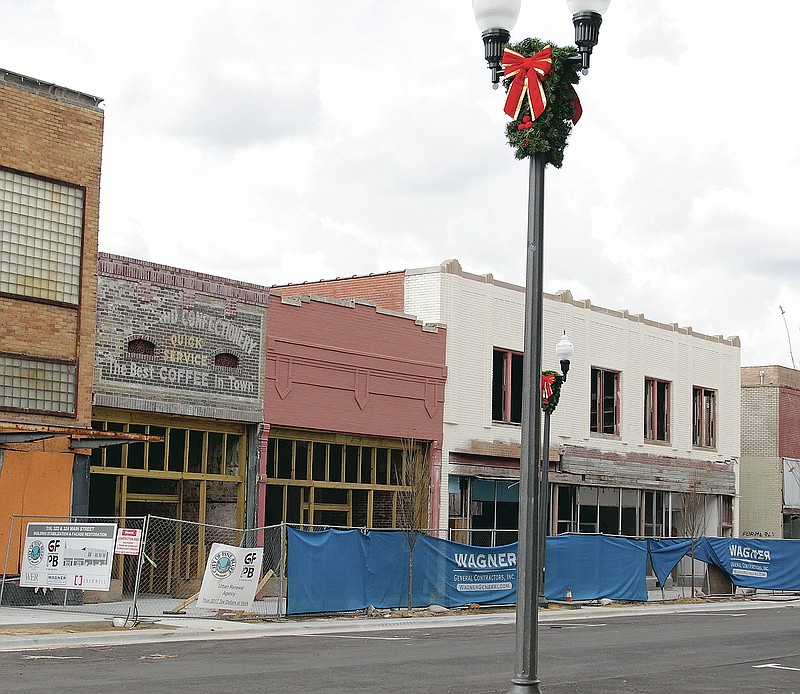 The three buildings being renovated by Urban Renewal Agency sit in historic Downtown Pine Bluff at 316, 322, and 324 Main St. According to documents from the Pine Bluff Historical Society, the building at right, which is now 316 Main St., used to be two buildings, one of which housed Newberry's lunch counter in the mid-20th Century, where sit-ins were held during the Civil Rights movement. The center building, 322 Main St., was once home to Wilson Bros. Drug Store and Lewis E. Duncan, physician, and it later housed Lea's Men's Store in the late 1950s and 1960s, according to the Historical Society. At left, 324 Main, from 1908 to 1913, was the home of Pine Bluff Fruit Co., then possibly Palais Royal around 1927, and then Kinney Shoes. (Pine Bluff Commercial/Dale Ellis

Editor's note: This is part two of a two-part series

PINE BLUFF -- Maurice Taggart, who has headed the Pine Bluff Urban Renewal Agency since September 2018, approaches blight removal as a necessary component of his job, he said, but he said he would much rather spend time planning the rebuilding of the city he has lived in his whole life.

To that end, he admitted to a fascination with the three Main Street buildings his agency is renovating to the point that tenants can then come in and do a custom interior build-out to remake the buildings to their needs.

Wagner Construction, which is doing the renovations of the three buildings, located at 316, 322, and 324 Main St., recently removed the facade at the top of the building at 324 Main St. and uncovered a sign of undetermined vintage painted on the building advertising a confectionery, quick service, and "the best coffee in town."

As soon as he was notified of the find, Taggart said he headed to the building and ordered the construction crew to preserve the sign.

"I wanted it left there intact," he said. "To me, that gives the building a feel of historical authenticity, and besides that, it's really cool. It's a part of the history of that building."

According to a document from the Pine Bluff Historical Society, the 324 Main St. building housed Pine Bluff Fruit Co. from 1908 to 1913, and in 1927 it may have been the home of a Palais Royal retail store. By the late 1950s through the 1960s, the space was the home of a Kinney Shoe Store, but no mention could be found of the sign painted across the front of the original facade.

The building at 322 Main St. was once home to Wilson Bros. Drug Store and Lewis E. Duncan, physician, before becoming the William E. Murray Department Store by 1913, according to the Historical Society document. In the late 1950s and 1960s, the document said, it housed a Lea's Men's Store.

The largest building under renovation, at 316 Main St., was at one time two buildings, and was constructed around 1930. According to the Historical Society, in the mid-20th century, the building housed Newberry's lunch counter, and sit-ins were staged there during the Civil-Rights Movement.

That richness of history, Taggart said, is what makes downtown Pine Bluff such a valuable asset and is why he and others put such effort into the revitalization of the area.

Taggart expects the renovations to be completed by early January, and he said he has already been contacted by two prospective tenants interested in locating downtown. A request for proposals has been issued, he said, in an attempt to find prospective tenants who have a high probability of success with businesses that will enhance the overall tone of the downtown area.

"We're not looking for fly-by-night operators. We're looking for tenants with resources and a track record of achievement," he said. "One of the things we have to do when it comes to downtown is make sure the synergy is on point. You want to ensure that the new potential tenants will synergize that whole area."

Taggart said a determination will likely be made regarding tenants by late February.

The request for proposals sets minimum qualifications for any prospective tenant to have three or more years of continuous experience in the development, management and operation of a business.

A block to the west of downtown sits a three-acre tract of land that is planned for a housing development to provide moderate income families the ability to live within walking distance of downtown, and, Taggart said, to provide Main Street with a target audience in easy walking distance from all points downtown. The property was a package of several parcels of land that Urban Renewal purchased last year for $560,000.

"The housing piece is important because the intent of it is to feed the downtown market," he said. "That's why that housing is so important, to ensure that we have that foot traffic in the downtown corridor."

Initially, Taggart said, the plan is to construct 28 to 30 housing units in the first phase of development. Once completed, he said, the plan for the next phase is to raze the old bingo hall and to construct another 20 units, although he said the total number of units will not be determined until completion of an architectural floor plan design.

"All of this is contingent upon us arriving at an agreement with the private developer," he said. "We're looking at potential options as far as ownership of the property, but at this time I don't think there is any real appetite on my board for us to become long-term landowners."

The eventual goal, he said, is to transfer the property into private hands, possibly an individual investor or an investment group.

Taggart did not put a figure on what living in the housing development, once completed, is likely to cost as he said a lot of preliminary work is still left to be done before any construction can begin. Any figure he might put out there, he said, would likely change before the development is completed.

"I will say this, though," he said, after giving it a few moments thought. "A family of four with two working adults will be able to afford to live there. The plan is to make sure that this housing is well within reach of a moderate income family."

What Taggart said he hopes to accomplish with the work he is doing is to bring Pine Bluff back from more than two decades of economic setbacks and population losses to the city he remembers from his childhood.

"I was raised in Pine Bluff," he said. "This is my home and more than anything else, I want to see Pine Bluff get back to what it was when I was growing up: the vibrant city filled with life and excitement that I remember. That's why I'm here." 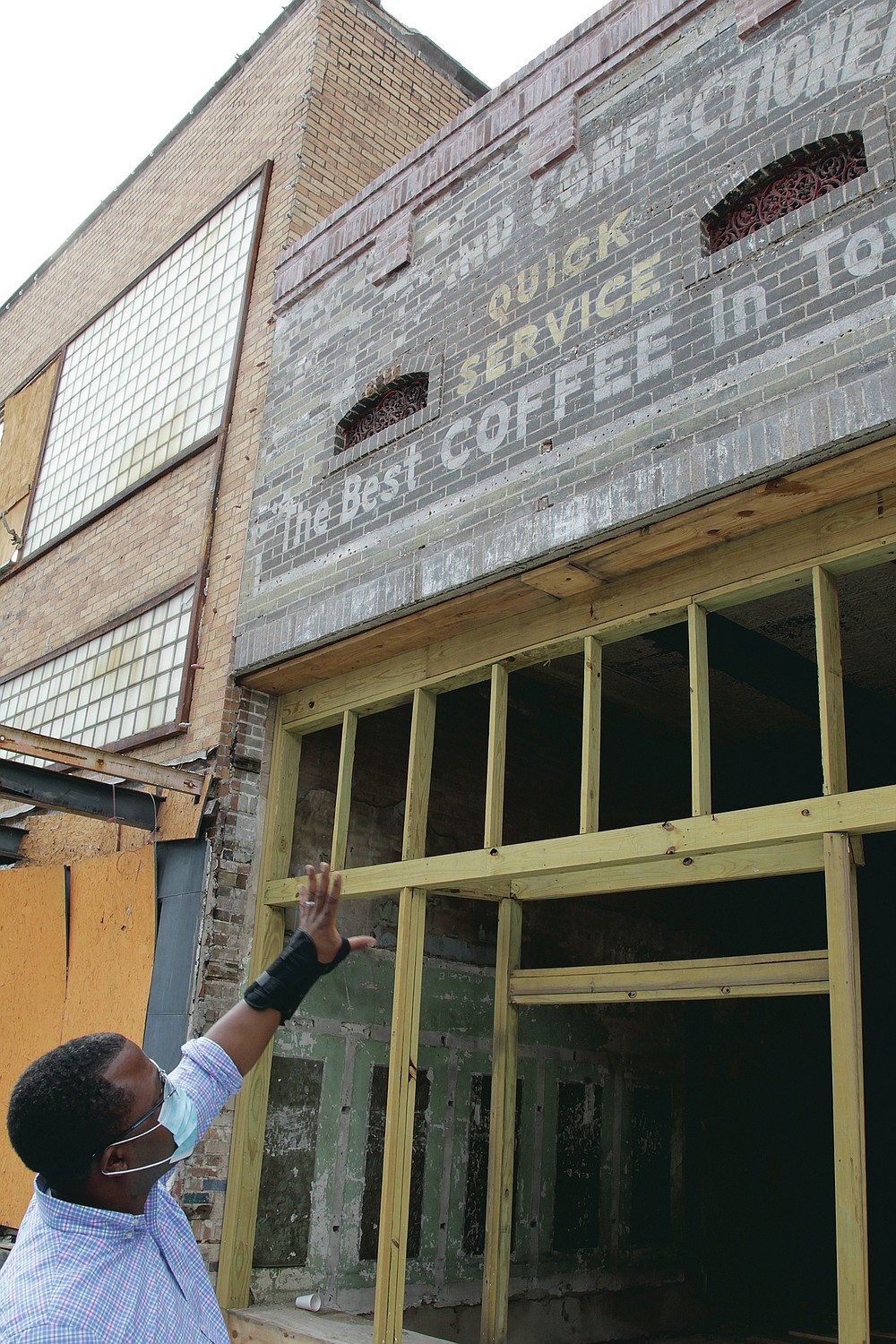 Maurice Taggart points to the signage that was revealed when the facade was removed from the facing of the building at 324 Main St. "I told them the leave it up there," Taggart said. "I like the historical authenticity that it gives the building." (Pine Bluff Commercial/Dale Ellis)
ADVERTISEMENT