OLD NEWS: Santa has been upstaging turkeys since 1920 and before 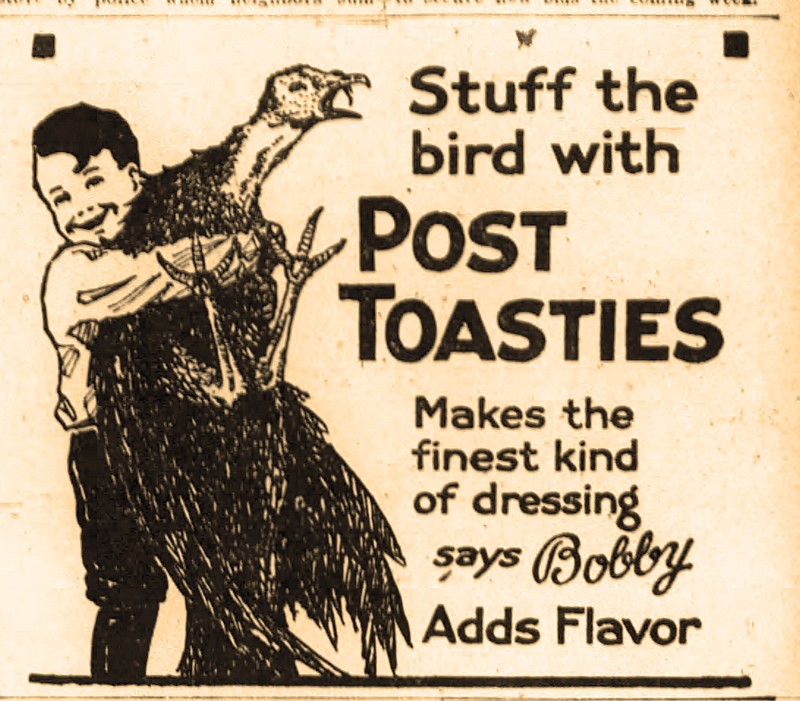 Are we still feeling our wrath today? Are we sufficiently grateful for that?

Were one to write a headline to float above the past three weeks, it might read: "Wrathy in America, Thanksgiving approaches." And, for a refreshing chance of pace, illustrating the story could be one or two or 20 lurid ads for Christmas shopping.

The appearance of such ads before Thanksgiving irritates, galls and upsets our gizzards ... in a most delightful way. It inspires eloquence. It has been decried (from a pulpit before a church congregation among which Yours Truly once upon a time sat cooling her jets) as "a teeming example of modern commercial depravity."

Teeming? Commercial? Yes. Depravity? Only if the bar is placed too low. But "modern"? No.

As much as we might enjoy working ire into a lather, we shouldn't entertain ourselves with the notion that pre-turkey-day Christmas selling is anything new. A century ago, jolly Santas leered from ads in the Arkansas Gazette and Arkansas Democrat while live turkey-day turkeys were still hiking around inside backyard coops, unfattened.

The autumnal elf sold everything from hats to phonograph records. Actually, at Little Rock, the Strawn-Tucker Furniture Store, 609-611 Main St., was urging folks to join its Christmas Phonograph Club early in October 1920. And it wasn't the earliest offender. The Quality Shop in the Arcade Building announced Sept. 19 that Santa had cut a contract to deliver a load of dainty doll clothes there, perfect for little misses' Christmas joy.

No sense getting all worked up over pre-Thanksgiving Christmas commercialism as though that was some new or alien development. But, speaking of turkeys and those century-ago newspapers, I had actual fun reading the Gazettes and Democrats published 100 years ago this week.

At the risk of annoying the fruitcake-haters, I was tickled once again to see ads promoting "Thanksgiving fruitcake" in both papers. That was still "a thing" even though, as we learned in 2019, the pale dead hand of Prohibition was snuffing the life out of traditional recipes.

Duchess Fruit Cake — "It's different!" — was available from shops or directly from the manufacturer, in sizes from 1 to 10 pounds for $1 per pound, post-paid.

The price of prepared food served at cafes annoyed the Democrat that week. It stained its prose purple, laying out a warpath of its own design because wartime price-lists were in effect in downtown cafes two years after the end of the Great War. Front page articles and editorial essays poked and mocked unnamed restaurateurs, who, quoted without attribution, in self-defense blamed the high cost of eggs.

The highly flavored, fragile, cold storage egg so delicately attuned to the ring of the cash register constitutes the basis for the statement Monday by restaurateurs from the first class hotel cafes to the hamburger stands dispensing fried egg sandwiches that the war is not over as far as eating places in Little Rock are concerned.

The price of potatoes, the paper noted, had dropped from $6 a bushel in 1919 to $3 a bushel, and rice, which cost 15 cents a pound the year before, had declined to 7 cents.

Asked about beans and peas, onions and cabbage and lard, the cottonseed lard universally used in the preparation of restaurant food, conversation is quickly shifted to eggs, quoted Monday morning at $23 a case of 30 dozen.

Unnamed cafe owners told the Democrat that their (offending) 10-cent cups of coffee (a cuppa had cost 5 cents or less before the war) offset the loss they took by serving eggs at 25 cents "for a couple, hard boiled, medium or soft."

The newspaper's outrage was not offset. The next day and the day after, more stories appeared to deflate cafe owners' protestations about high overhead.

In other wrathy matters, that Nov. 22 Democrat also reported that two counties had yet to deliver complete election results to the governor's office. They were Logan and Conway counties. Conway was the main offender; it had delivered no results at all.

The election was Nov. 2, and the national loser, James Cox of Ohio, had carried Arkansas. Because he was the Democrat. The Republican, Warren G. Harding, did rather better than had been expected but, not counting those two counties, he ran 41,191 votes behind Cox, the Democrat reported.

Meanwhile, President-elect Harding was fishing up a storm on vacation in Texas, and headed to Panama. The Nov. 21 Gazette reported that while his steamer plowed south through the Gulf of Mexico to Panama, Harding had confided to reporters, "Every day's Thanksgiving Day with me."

And then he gazed fondly at a crate in which his Chicago turkey flapped about.

The air was so fine and it was so pleasant on deck that Mr. Harding said:

"Let the turkey out and give him a chance to stretch his legs."

So this was done, and the turkey had a supervised stroll.

Harding was happy with his turkey from Chicago, but the same paper reported that President Woodrow Wilson had received a 38-pounder from the Cuero, Texas, Chamber of Commerce, and a second huge bird was headed his way from Kentucky. Live turkeys were shipped by rail around the nation in those days, to be slaughtered behind butcher shops or behind nice houses; slaughtering a live turkey was not some rare power reserved to the presidential cook.

No doubt Wilson's and Harding's birds were richly dressed, but none of them so much so as the turkey in Iowa that was found to have somehow swallowed a diamond.

The Nov. 25 Gazette carried this story. A restaurant chef at Sioux City, one L.A. Donissee, found the stone while he was prepping for Thanksgiving.

A jeweler pronounced it a diamond weighing one-fifth of a carat and offered $75 for it. The turkey came from northern Minnesota.

Finally, here's my favorite headline from Thanksgiving week 1920, published in the Democrat on turkey day itself, Nov. 25:

The city had recently created a street improvement district; that is, the people had voted to tax themselves to improve walks and streets. The tax was due Nov. 23. Not many had paid up. They were very resentful and attended large mass meetings at which they argued that the tax had been misrepresented to them on the ballot, that they thought it was about bonds, that it had been unfairly and inequitably assessed and that they would pay nary a cent of it, not unless they were forced.

The imposition of misunderstood taxes is sometimes seen today, and we keep up a great tradition of much indignation and protest.

How blessed we all are to have so many reasons to complain. Whatever would we talk about without them? 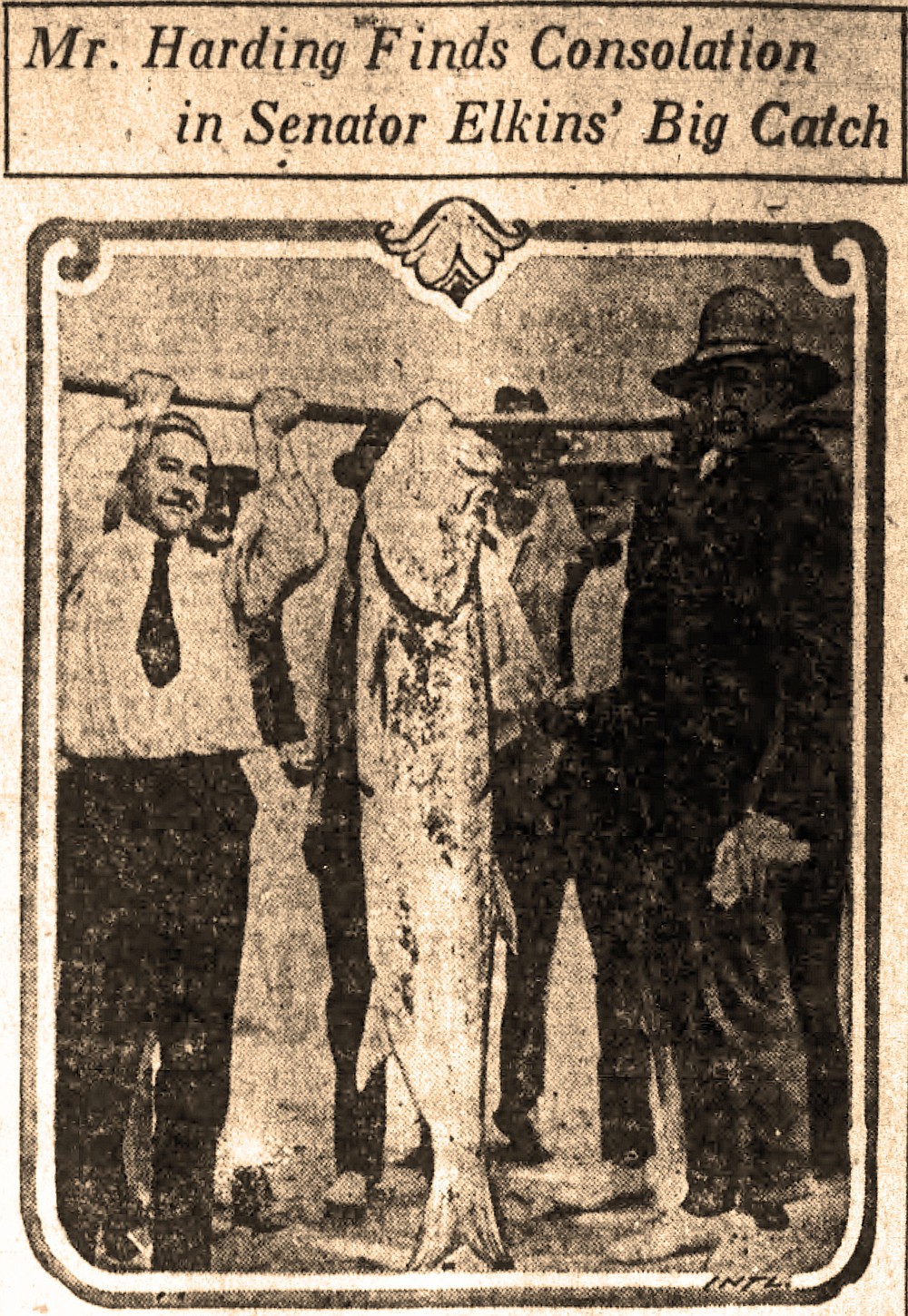 President-elect Warren G. Harding went fishing during his vacation in Texas and Panama, as reported in the Nov. 21, 1920, Arkansas Gazette. (Arkansas Democrat-Gazette) 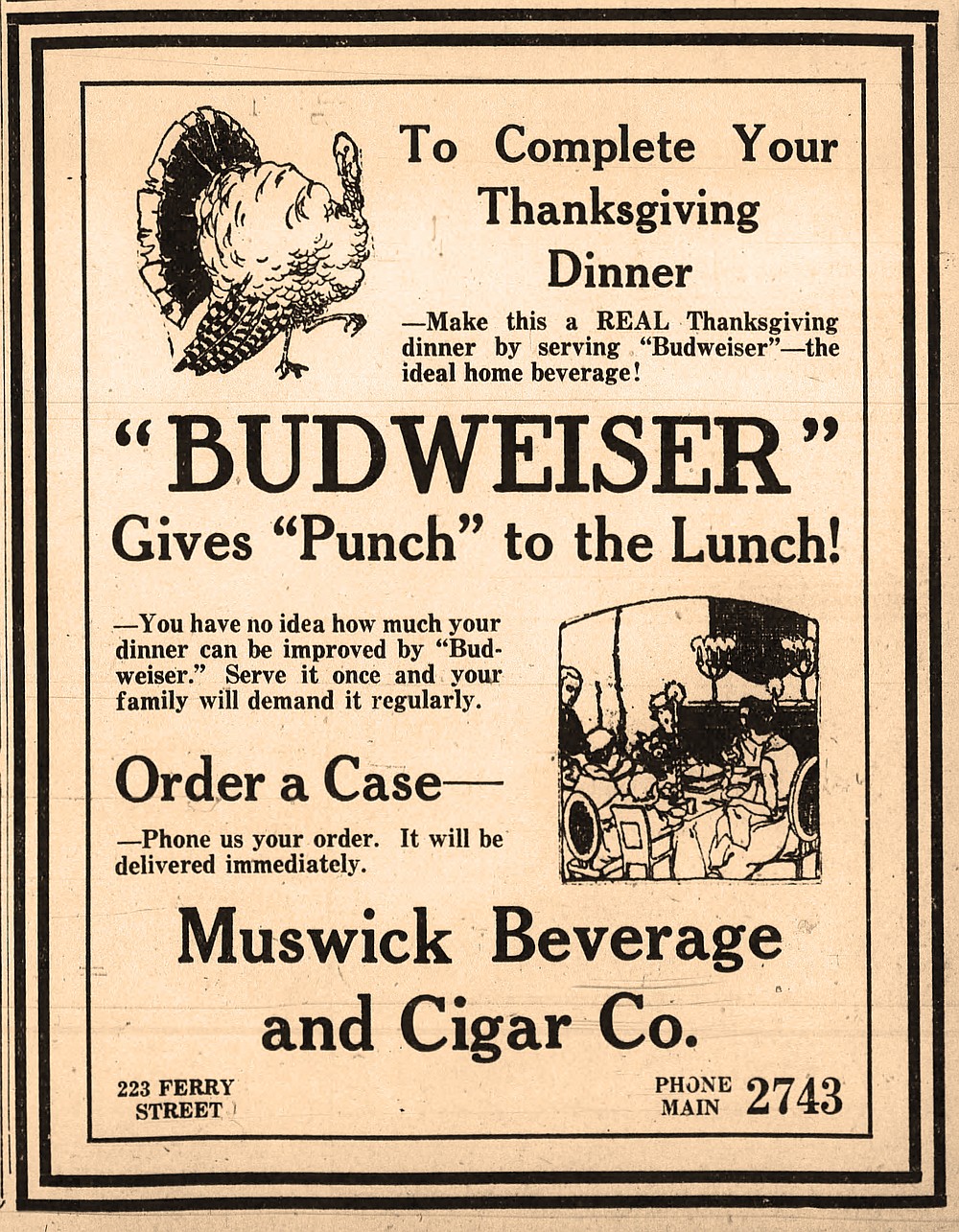