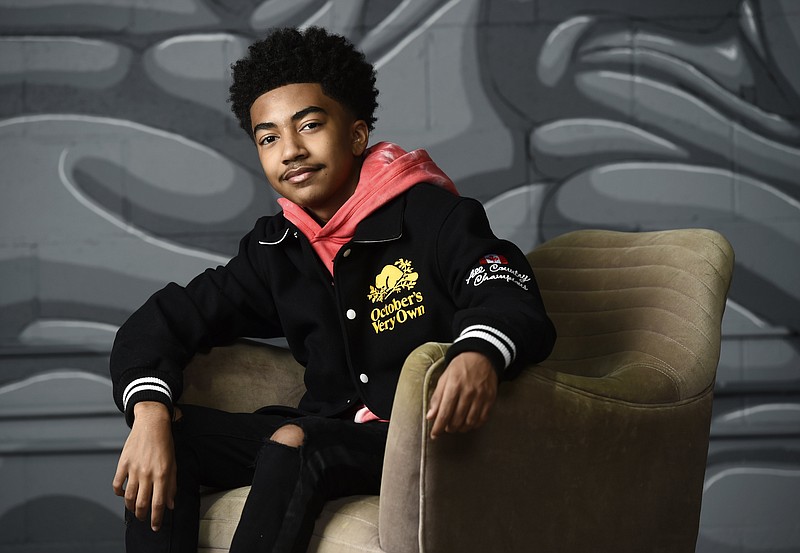 Miles Brown, who plays Jack Johnson on ABC’s “black-ish,” has grown up to be a singer and he has a new album coming out. (The Associated Press/Chris Pizzello)

LOS ANGELES — Miles Brown says playing Jack Johnson on the hit comedy series "black-ish" inspired him to speak out about equality and social justice through his art.

He does just that on his debut hip-hop album "We The Future," alongside guests including Slick Rick and Jidenna.

Brown says he's been working on the 15-song collection aimed at empowering young people for two years, with help from his father Jack Brown, who raps as Wildchild in the hip-hop group Lootpack. Brown decided to re-record his raps when his voice deepened after puberty, saying "I think it sounds a lot better."

The 15-year-old performer spoke with The Associated Press over Zoom from his Los Angeles home about his lyrics, following in his father's footsteps and helping other young people find their voices. Remarks have been edited for clarity and brevity.

Q: What fueled your decision to make an entire album about social messages?

A: It really started with "black-ish." And it's me reaching out to kids and the youth. If you look at the cover, I'm expressing how we're going to be the ones who will be in charge one day. I want to make sure we know what we're doing and realize how much power and how much of an impact we're going to have over time. Shout-out to my big sister who helped come up with the album cover which is a resemblance of the signing of the Constitution. "We The Future" is like saying, "We the People."

Q: The album underwent a few changes before you released it. What was the process of updating the project before putting it out?

A: The actual single "We The Future" with Dame D.O.L.L.A (basketball player Damian Lillard) was recorded mad-long-ago, just like all of the other songs on the album.

The problem was, I was going to release it and time went by; I was busy with "black-ish" and couldn't find the right time to do it. And then, my voice changed! I was like, do I just put it out even though I sounded way younger than I do now? I re-recorded the whole album all over again — same lyrics, same everything, just different voice. If you pay attention some of the ad-libs are probably older, I kept those in there. But I'm glad I waited because I think it sounds a lot better.

Q: What role does "black-ish" play in your decision to speak about social issues?

A: It's such a groundbreaking show because they've talked about things that no other show covers. That inspired me to start talking about topics other artists my age aren't talking about. Whether it's mental health, confidence, bullying — there's so many things that I can speak about being in the position I'm in. Thank you to "black-ish" for giving me my wings to be able to speak up.

Q: You're known mostly as an actor. Where did your desire to break into the music industry come from?

A: I've always wanted to make music. It's been something I wanted to do since I was young. My dad is an artist and that's always where I got my inspiration from. He's always been there for me when it came to music, acting or dancing. But I think it's special when it comes to music because that's something he's personally done. And seeing him do his thing, going on tours and the impact his music had, I've always thought "this looks fun." But now, I want to take it seriously, and now is the time I want to get things out.

Q: Have you been told you are too young or because of your age, your voice doesn't matter?

A: That's really what inspired this album in the first place. If those things weren't said, I wouldn't need to make a call into the future.

If we all knew what our power was, there would be no need for me to make this album. I know friends that have been told they are too young or they don't look good enough to do certain things. That's why I wanted to make this album because it's calling out to the future. We're going to be the ones in control and we don't want to repeat the cycle of the way things are going now.