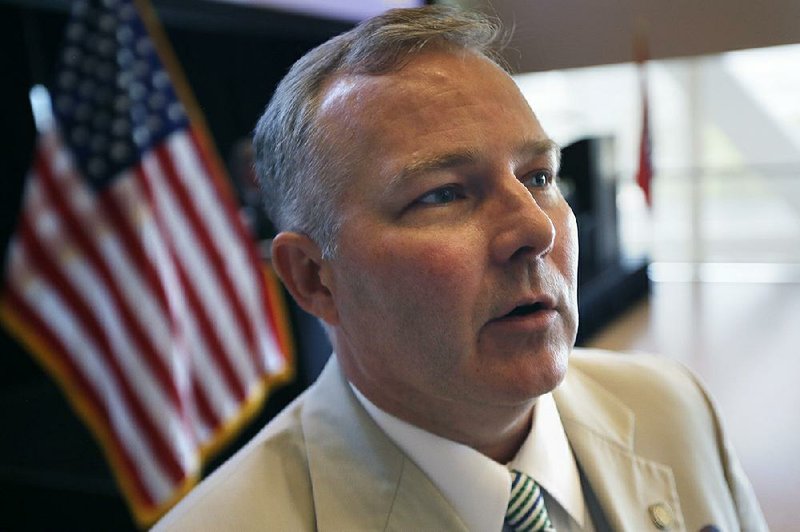 Republican Lt. Gov. Tim Griffin, a candidate for governor, said Monday that he wants to phase out the state's individual income tax, though it could take 10 years or possibly longer.

"Eliminating the income tax won't be easy, and it won't happen overnight," Griffin said in a news release.

"How long it will take to achieve this goal will depend on a number of factors, including our rate of economic growth and our commitment to spending discipline and reform of state government," Griffin said. "We must be responsible and do it it in a way that protects funding for essential government services, especially for our most vulnerable citizens."

He said the goal of phasing out the individual income tax should be "our North Star."

Griffin of Little Rock and Attorney General Leslie Rutledge of Maumelle are vying for the Republican nomination for governor in 2022.

Republican Gov. Asa Hutchinson, who has been governor since 2015, is barred from seeking reelection under the state's term-limits amendment.

No Democrat has announced an intention to compete in the race.

Arkansas' general revenue tax collections are projected by state officials to raise $6.94 billion in fiscal 2021 that ends June 30, including $3.38 billion in individual income taxes, $2.56 billion in sales and use taxes, and $453 million in corporate income taxes.

The states without individual income taxes rely on oil and gas revenue or have property taxes that dwarf Arkansas' property taxes, he said.

"You always have to look at taxes as a balancing act," Ingram said.

Griffin said Hutchinson and the Legislature "deserve tremendous credit for lowering our chronically uncompetitive income tax rates from 7.0% to 5.9% starting in 2015.

"However, there is much more work to be done," he said in his news release. "Now, more than ever before, states are competing with each other for jobs, for new movers, for skilled workers and for quality of life. Arkansas needs bold ideas if we are to make our state the best possible place to live, work and raise a family. That's why I'm calling for a complete and total phaseout of Arkansas' personal income tax.

"Eliminating the income tax will incentivize work and productivity, attract high-quality, good-paying jobs and unleash Arkansas' small business," said Griffin, who has been lieutenant governor since 2015. "I am ready to chart a course that leads Arkansas to a brighter future -- one with zero income tax. That conversation begins today."

Last week, Mississippi Republican Gov. Tate Reeves called for phasing out that state's income tax, which generates about 32% of its general fund revenue, by 2030, according to news reports.

Hendren, whose uncle is Hutchinson, said Monday in a text message to the Democrat-Gazette that he is proud of the work "we've done to reduce income taxes by over 300 million dollars in the last 7 years in a responsible and fair way.

"While income tax is a factor that must be considered, particularly with regard to our ability to compete with other states, we must also consider that Arkansas has the 49th lowest property taxes in the nation and some of the highest sales tax rates in the nation," he said.

"Using the rates of tax relief that we have used the last 7 years it would take over 35 years to phase out all Arkansas income tax completely unless there would be tax increases elsewhere or dramatic cuts to the state budget," Hendren said.

He said he is eager to see Griffin's proposal about either of those possibilities or more details about the timing and structure of his plan.

Rutledge declined to comment about Griffin's proposal through a campaign spokesman Monday night.

House Revenue and Taxation Committee Chairman Joe Jett, R-Success, said Monday he's not surprised by Griffin's proposal because "it fits within what he has been talking about for years."

Asked if phasing out the tax is realistic, Jett said, "I guess time will tell." He praised Griffin for starting the discussion.

The governor had no comment about Griffin's proposal, said Hutchinson spokeswoman Katie Beck.

For the 2021 regular session, Hutchinson proposed lawmakers reduce the state's top individual income tax rate from 5.9% 4.9% for new residents to Arkansas for five years, along with reducing the rate to 4.9% for others over a five-year period. Reducing that top rate is projected by state officials to reduce revenue by $275 million a year ultimately.

The governor also recommended lawmakers approve $50 million in income tax relief for low- and moderate-income Arkansans and reduce the sales tax rate on used vehicles priced between $4,000 and $10,000 from 6.5% to 3.5%. Used vehicles priced below $4,000 are already exempt from the tax.