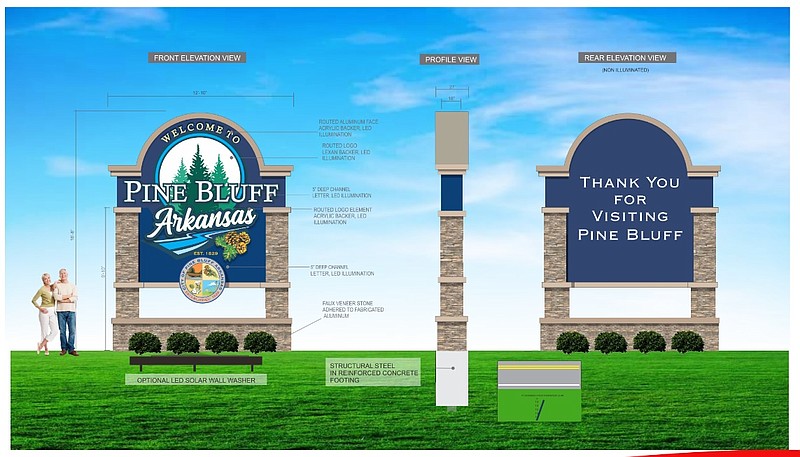 Anyone who has traveled the highways and byways has seen the gateway signs that welcome visitors to cities.

Gateway signs are there to make a good first impression about a town or city, but Pine Bluff's hellos to those entering have generally been simple "Entering Pine Bluff" announcements on metal poles. That is about to change.

As part of Go Forward Pine Bluff's initiative and after a year and a half of planning, the city of Pine Bluff will begin construction in 2021 on three new welcome signs.

These signs will tower over 18-wheeler trucks and are designed to catch the eye of passers-by with the illuminated LED wording on a faux veneer stone structure. On top of welcoming newcomers, it's hoped that the signs will become a sense of pride as Pine Bluff rebrands itself.

"It's not like we never had entrance signs before, but they were not comparable to what you see in other cities," said Ryan Watley, CEO of GFPB. "We are moving to a different period and we want to be comparable and competitive with other cities."

The illuminated led signs will be located on Highway 63, past Walmart going toward El Dorado, Highway 65 and at the corner of Jefferson Parkway and Dollarway Road. An original location for one of the signs was at the Martha Mitchell split, but Watley said the Arkansas Department of Transportation's regulation would not allow for such placement.

Watley said a bid was put out and in the end the company that won produced an artist's rendering of the signs.

"The draft work is great and something the city can be proud of," said Watley. He also gave praise to the mayor's office, specifically William Fells, special projects manager, who he said is pushing the project to the finish line.

Fells said the next step before construction is to get the surveyors to the site and begin clearing it for construction. Insulation and electrical work will also be needed in order to complete the project.

According to Watley, construction is expected to begin at the end of the first quarter in 2021, with Fells saying that the completion date is to be determined.

One version of the signs is 22 feet tall and 18 feet wide. Another version is somewhat smaller.

Kemma Martin Rhodes said in response to seeing the artist's rendering of the signs on Go Forward Pine Bluff's Facebook page that she had been asking for this for over 10 years and couldn't believe it is finally happening.

"I'm so happy for my city. Now I can stick my chest out a little," she said. "Inviting people to visit our city, they would have to look for little green highway signs to let them know they have made it to the city."

Many say the signs are more than just a beautiful design, but a way to enhance the residential and visitor experience.

"Some people will say this is long overdue and I would agree," said Watley. "This is just another piece of the puzzle and Pine Bluff just catching up by just doing the basic things." 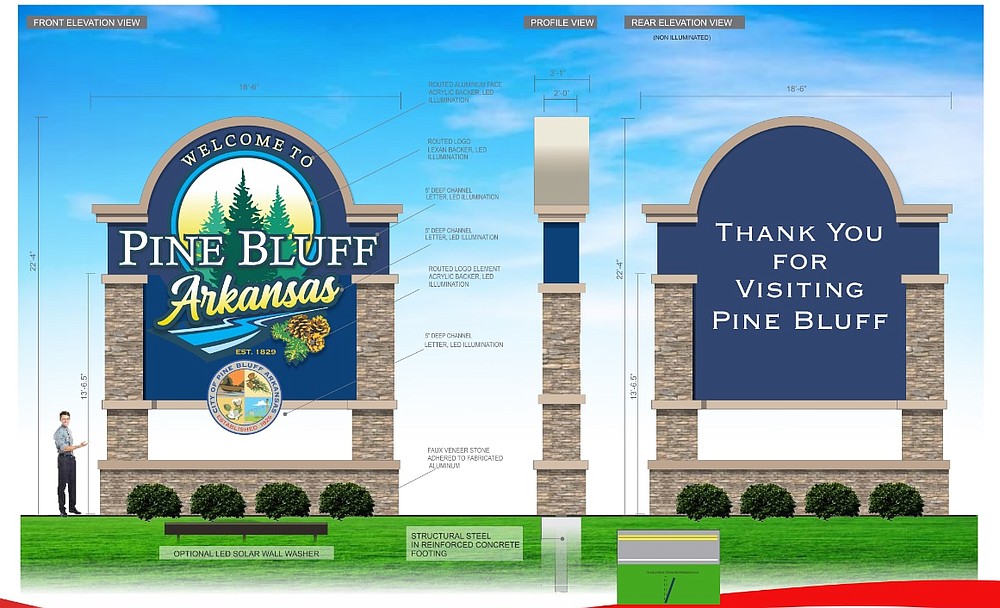 Three 'Welcome to Pine Bluff' signs are in the works for the city. One version, shown in this artist's rendering, is 22 feet tall. (Submitted photo)
ADVERTISEMENT