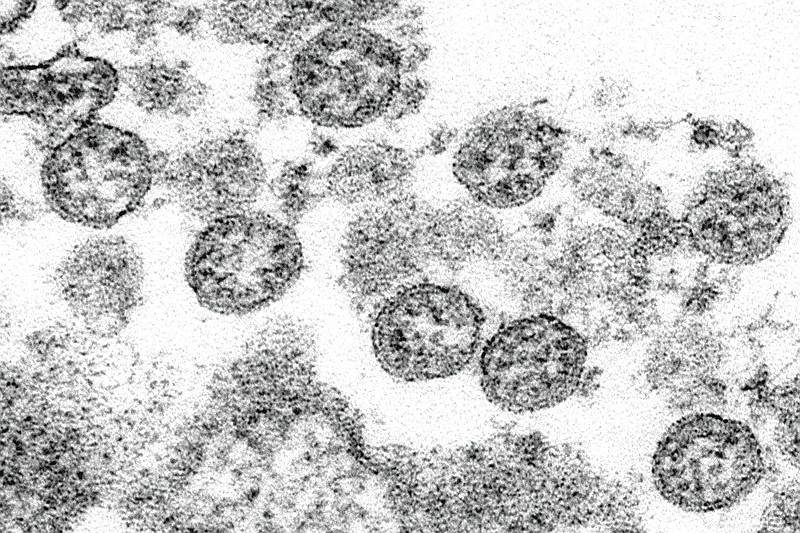 FILE - This 2020 electron microscope made available by the U.S. Centers for Disease Control and Prevention image shows the spherical coronavirus particles from the first U.S. case of covid-19. (C.S. Goldsmith, A. Tamin/CDC via AP)

The holiday week began with virtual instruction for one of the six largest school districts in the state while another district has decided to reduce in-person class days through Dec. 18.

A state Health Department report Monday showed active cases declining in public school districts compared with last week, even as cases remained more than twice as high as at the start of the month.

The Pulaski County Special School District opted to have teachers work from home and students learning remotely Monday and today while planning for students to return Nov. 30, after the Thanksgiving holiday.

The central Arkansas school district enrolls more than 11,000 students, according to state data. Four elementary schools shifted to virtual instruction in mid-November and have not resumed in-person instruction, a district spokeswoman said.

"We have contained the spread in those schools; however, we are continuing to see community transmission," Superintendent Charles McNulty said in a video posted to the district's website.

Thursday's state Health Department report listed the district as having 50 active covid-19 cases, but the number dropped to 30 in Monday's report.

Stuttgart School District announced Friday that beginning Nov. 30 all students will rotate for two days of in-person instruction weekly as it shifts to its "Level 2 Moderate Response" plan.

"We are switching to this response level in hopes of preventing our entire district having to go virtual," Superintendent Rick Gales said in a letter posted on the district's website. He cited the rise in cases "throughout our state."

As of Monday, the district had five active cases of covid-19, according to the latest state Health Department report. The district enrolls more than 1,500 students, according to state data.

Lilly on Monday estimated that about 200 students throughout the district were in quarantine because of exposure to the coronavirus. The state Health Department report listed the district as having seven active cases.

"We're trying to see if we can get a control on our issues as far as covid and we're trying to get these numbers down," Lilly said. The district plans to have students return Nov. 30.

Lilly said that at the beginning of the school year, roughly half of the approximately 2,250 students signed up for virtual instruction. That proportion has declined to slightly more than one-third, Lilly said.

But he said that with virtual instruction, "some of the kids were kind of falling through the cracks."

Lilly said the district will keep watch during the week and adjust its plans if case numbers increase.

"Safety is the No. 1 priority that we have," Lilly said.

Among other schools making changes, Cedar Ridge High School on Monday and today shifted to virtual instruction, according to a social media post. The school is located in Newark, about 100 miles northeast of Little Rock.

For all public schools, the state Health Department report showed active cases decreasing to 2,161 from Thursday's total of 2,559. The total remained elevated compared with the start of November, however, when a Nov. 2 report listed 1,024 active cases in the state's public school districts.

The reports are generally released on Mondays and Thursdays, but a report is not expected on the Thanksgiving holiday, a department spokeswoman said.

Among colleges and universities, active cases decreased to 660 from Thursday's total of 766.

The latest college case total remained below the mid-September peak of more than 1,000 active cases tied to colleges, but it remained higher than at the month's start, when there were fewer than 400 cases, according to Health Department data.

The University of Arkansas, Fayetteville topped all schools with 153 active cases as of Monday, up by one compared with Thursday's report.

While some colleges opted to end face-to-face instruction at the Thanksgiving holiday as a way to reduce the chances of travel leading to an increase in campus coronavirus cases, UA is having students return -- although Chancellor Joe Steinmetz, in a message to campus Friday, said that if students wish to finish the fall semester via remote instruction, "I again encourage you to make arrangements with your instructors."

Steinmetz acknowledged the increased risk of coronavirus spread on campus as a result of travel but said testing can help.

"Needless to say, with people spreading out across the state and country, the chances of a surge in cases when we return is much higher," Steinmetz said. "Getting tested is a small way to do your part to keep everyone safe, particularly those with underlying health conditions or those who are in frequent contact with those who have them."

UA announced Monday the postponement of Saturday's football game with Missouri, citing a combination of positive covid-19 test results, contact tracing and resulting quarantines. The possible rescheduling of the game will be evaluated, according to the university's announcement.

Listed as having the second-most covid-19 cases was Harding University, which has an enrollment roughly one-sixth the size of UA's more than 27,500 students. The private Christian university in Searcy had 69 active cases as of Monday, down from the 89 active cases listed in Thursday's report.