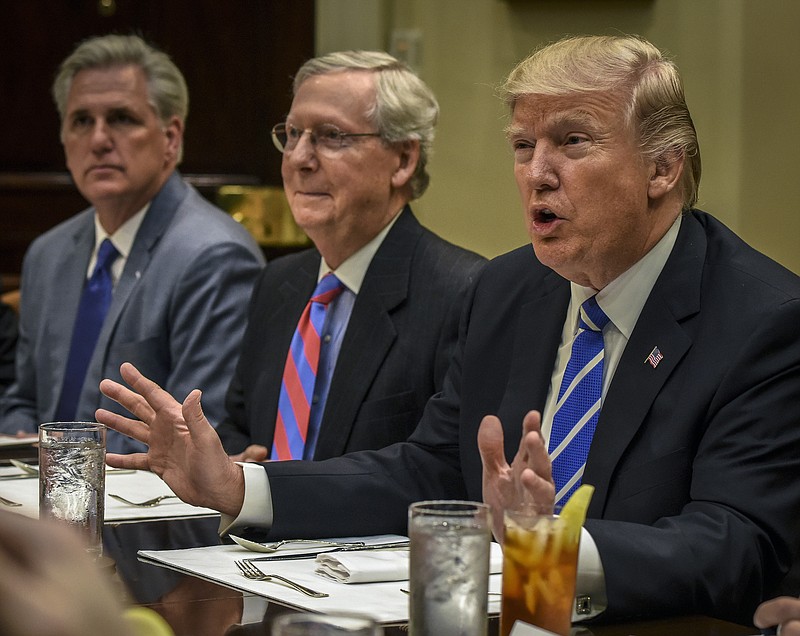 The statement coincided with a similar letter from dozens of top business executives. Both were issued ahead of Trump and General Services Administration chief Emily Murphy's announcements later on Monday that they would begin the transition process.

The message called on "Republican leaders -- especially those in Congress -- to publicly demand that Trump cease his anti-democratic assault on the integrity of the presidential election."

Trump continues to wage legal battles contesting the election's results in several key states that turned the race in Biden's favor even as he ordered his team to cooperate in the Biden transition.

The statement's signers urged Republican leaders to "strongly oppose" Trump's "dangerous and extra-legal efforts to threaten and intimidate state officials in order to prevent a vote by the Electoral College."

Senate Majority Leader Mitch McConnell's office on Monday referred to comments he made last week, dismissing requests to speak out.

"In all of these presidential elections, we go through this process. What we all say about it is frankly irrelevant," McConnell, R-Ky., told reporters last week. "All of it will happen right on time, and we will swear in the next administration on Jan. 20."

A spokesperson for House Minority Leader Kevin McCarthy, R-Calif., did not immediately respond to a request for comment, nor did the White House.

The national security officials' statement was released hours before officials in Michigan certified the election results in that state showing Biden defeated Trump by more than 155,000 votes. Last week the president personally called a county canvass board official in Wayne County, Mich., home to Detroit. That official subsequently tried to rescind her vote to certify results there.

"President Trump's continued efforts to cast doubt on the validity of the election and to interfere in state electoral processes undermines our democracy and risks long-term damage to our institutions," the statement says.

The organizers of Monday's statement led previous efforts before the election to get Republican national security experts and others to support Biden over Trump. Among other initiatives, they published a newspaper ad signed by many of the same names that appeared on Monday's statement. The organizers said they were motivated by concern that so many Republican leaders have declined to repudiate Trump's unfounded election claims.

"It was a sense of both alarm that the President of the United States is trying to undermine our election ... and disappointment that so many Republican leaders are abetting that effort either with active support or with their silence," said Ken Wainstein, a former U.S. attorney for Washington and who later served during the George W. Bush administration as assistant attorney general for national security.

Another organizer of the effort, John Bellinger, said that he encouraged the statement out of dismay that many congressional Republicans have remained silent. Bellinger served as legal adviser to the National Security Council and the State Department during the George W. Bush era.

"It is shocking to me and other senior national security officials, who have dedicated much of our careers to protecting the country, that congressional Republicans are allowing Trump to impugn the integrity of our elections," Bellinger said, adding that elections are "the very core of American democracy."

Negroponte, who served nine successive presidents, said of the Trump team: "They're in denial about the loss and therefore not allowing the transition to go forward."

It takes time to identify and vet nominees for core jobs within the new government, including the roughly 1,000 or so people who need Senate confirmation, he said.

"Every day that's lost is not only unfair to the new administration, it's harmful to the country and our national security," Negroponte said.

Blocking the transition, he said, "is wrongheaded. It's just immature."

Hayden, who as CIA director briefed then-President-elect Barack Obama in 2008 on covert action programs, said that the agency "very much" wants to brief Biden, but it is being prevented from doing so. "That," he said, "is very concerning."

The statement added to complaints from a small but growing number of Republicans who describe Trump's election response as a threat to the nation's security.

"The Republican Party is not going to be saved by hiding in a spider hole," said Trump's former national security adviser, John Bolton, during an appearance Sunday on CNN's "State of the Union." Bolton is not among those who signed the statement. "We need all of our leaders to come out and say, 'The election is over.' We're not talking about an abstract right for Trump to use his legal remedies. We've passed that."

Additionally, more than 160 top American executives asked the administration on Monday to immediately acknowledge Joe Biden as the president-elect and begin the transition to a new administration.

Even one of Trump's stalwart supporters Stephen Schwarzman, the chief executive of Blackstone, the private equity firm, said in a statement that "the outcome is very certain today, and the country should move on." While he did not sign a letter sent to the administration by the other executives, he said he was "now ready to help President-elect Biden and his team."

Signatories to the letter included the chief executives of Mastercard, Visa, MetLife, Accenture, the Carlyle Group, Conde Nast, McGraw-Hill, WeWork and American International Group, among others. They included some of the most important players in the financial industry: David M. Solomon, the chief executive of Goldman Sachs; Laurence D. Fink, chief executive of the asset management giant BlackRock; Jon Gray, Blackstone's president; and Henry R. Kravis, a prominent Republican donor who is the co-chief executive of KKR, a private equity firm.

The letter was also signed by George H. Walker, the chief executive of the money manager Neuberger Berman and a second cousin to President George W. Bush, and Jeff T. Blau, the chief executive of one of New York City's largest private developers, the Related Cos., which has been a major donor to the National Republican Senatorial Committee, filings show.

As a way of gaining leverage over the GOP, some of the executives have also discussed withholding campaign donations from the two Republican Senate candidates in Georgia unless party leaders agree to push for a presidential transition, according to four people who participated in a conference call Friday in which the notion was discussed. The two runoff elections in Georgia, which will take place in early January, will determine the balance of power in the U.S. Senate.

Information for this article was contributed by Tom Hamburger and Ellen Nakashima of The Washington Post; and by Kate Kelly and Danny Hakim of The New York Times.