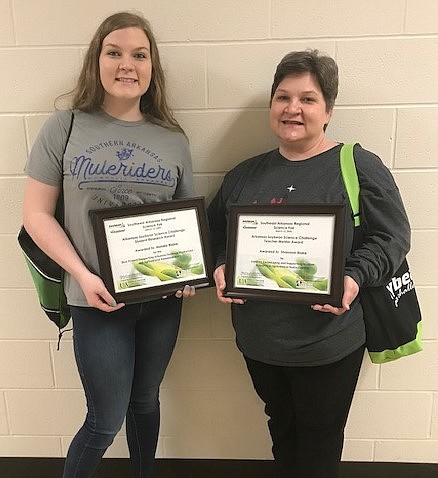 Natalie Blake, left, of Star City, won the 2020 Arkansas Soybean Science Challenge award for Southeast Arkansas in March. She is shown in this file photo with her mentor and teacher Shannon Blake. (Special to The Commercial/U of A System Division of Agriculture photo)

As many growers across Arkansas already know, November is Arkansas Soybean Month.

In August, Gov. Asa Hutchinson signed a proclamation declaring it so, noting the more than 2.6 million acres of the crop harvested in Arkansas in 2019, and that soybeans contributed more than $1.1 billion to the state's economy.

Like any successful, long-running industry, soybean growers in Arkansas and the surrounding region are intensely invested in cultivating the next generation of professionals, hoping that they are as well-equipped as possible to follow in previous generations' footsteps.

Organizations such as the University of Arkansas System Division of Agriculture and the Arkansas Soybean Promotion Board work to promote interest in the crop among young Arkansans, cultivating interests from farming to scientific research, as well as other paths towards a strong future for the crop and those who raise it.

The program opens up new insights into the world's food supply, even for youth who grow up in Arkansas' agriculture-rich environment.

The Soybean Science Challenge, which began in 2014, works to increase knowledge about the crop and its attendant industry among students in grades 6-12.

Deidre Young, extension Soybean Science Challenge coordinator for the Division of Agriculture, said that each year, about two dozen Arkansas students participate in at least one of eight International Science and Engineering Fairs -- commonly referred to as ISEF -- hosted throughout the state.

"Globally, there are about 1,500 students from 66 countries participating in ISEF events," Young said.

In terms of impact, Young said that Arkansas has seen a distinct increase in high school graduates entering both STEM-related fields at the collegiate level, as well as entering agricultural professions.

Over time, the program has adapted to new changes and challenges -- and 2020 has offered more than its fair share.

Young said that, in light of the ongoing covid-19 pandemic, making things virtual was a natural move for the program.

"Most of the science fairs, at this time, are choosing to go virtual," Young said. "We will also be following this policy by asking students to submit a short video and PowerPoint of their presentation. Our judges will review the material and judge accordingly."

The Soybean Science Challenge has long provided lesson plans and materials to teachers across Arkansas.

Recently, the program has provided agriculture-related materials that are aligned to the "Next Generation Science Standards," federal education standards originally drafted in 2013, and which have been adopted by most U.S. states.

"We're now doing teacher workshops across the state on implementing our agricultural lessons in the classroom and how to start a science fair," Young said. "The SSC is also sponsoring local conventions and presenting convention workshops at both the state and national level."

The Soybean Science Challenge is also reaching out to teachers across the nation with online resources and courses, she said.

"The Science Fair 101 Course is a teacher in-service online course that instructors can take to get the necessary information they need to start a science fair in their school," Young said.

The course, which covers the basic requirements for schools to hold an ISEF-affiliated fair, can be accessed at www.courses.uaex.edu. Participants have the added bonus of being able to contact the Soybean Science Challenge for further support, Young said.

To learn more about the Soybean Science Challenge, visit https://www.uaex.edu/farm-ranch/special-programs/Education_in_Agriculture/soybean-science/.