ARKANSAS SIGHTSEEING: See stately sculptures on a walking tour of the Capitol grounds

by JACK SCHNEDLER PHOTOS BY MARCIA SCHNEDLER SPECIAL TO THE DEMOCRAT-GAZETTE | November 24, 2020 at 1:46 a.m. 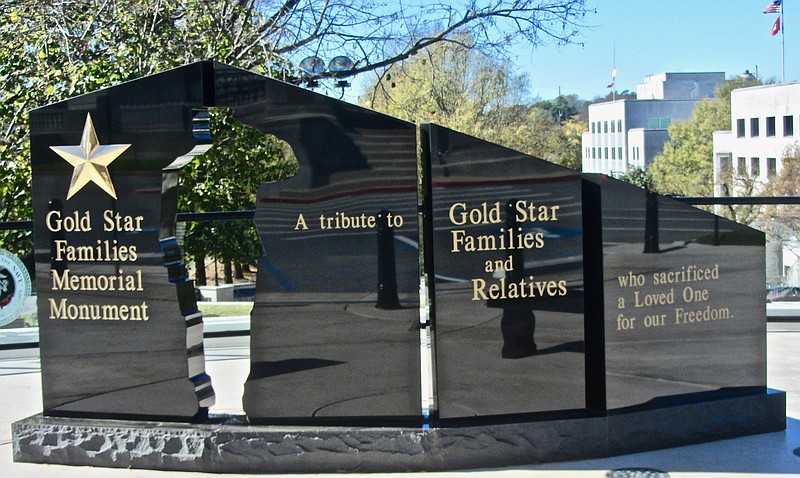 Dedicated last year, the Gold Star Families Memorial is made from black granite. (Special to the Democrat-Gazette/Marcia Schnedler)

It's only a slight stretch to call the grounds of the Arkansas State Capitol in Little Rock an outdoor sculpture garden. Some 16 sculptures and other monuments surround the domed government building.

Much of the three-dimensional art honors individuals, groups and other entities that have played a role in our state's history. Among the most striking is a sculpture of the Little Rock Nine, striding with textbooks in hand to desegregate Little Rock Central High School in 1957. Dedicated in 2005, the bronze is the work of the Arkansas Democrat-Gazette's John Deering and his wife, Kathy.

The newest tribute is the Gold Star Families Memorial, dedicated below the Capitol's west facade last year to honor those who have lost relatives in military service. A striking feature is the silhouette of a saluting serviceman cut out of the black granite. There are 50 similar monuments around the nation, but this is the first placed on the grounds of a state Capitol.

About half the monuments are focused to some extent on military matters. John Deering sculpted the swooping bronze eagle at the Medal of Honor Memorial. Dedicated in 2000, it salutes Arkansas' 25 recipients. The earliest, U.S. Army First Sgt. William Ellis, was honored posthumously for Civil War valor. The most recent, Army First Sgt. Nick Bacon, earned his for heroism in Vietnam.

Deering also sculpted the central figure — a soldier in battle regalia — for the Vietnam Veterans Memorial. Partly circling the combat GI, the granite monument lists the names of more than 400 Arkansans who lost their lives during the many years of fighting in Southeast Asia.

The fighting that brought the United States into existence is remembered at the American Revolution Bicentennial Monument. A travertine canopy shelters one of the 50 replicas of the original Liberty Bell given to the states in 1950.

A conflict with an ambiguous outcome is remembered at the War of 1812 Memorial Fountain. Veterans of that fighting against the British received land grants in what was then Arkansas Territory. The monument was refurbished in 2004 when a drinking fountain was added.

Civilian achievements are honored at the Law Enforcement Officers' Memorial, which pays respect to those who have lost their lives in the line of duty. That's the focus as well of the Arkansas Fallen Firefighters Memorial, whose three figures cast in bronze make a powerful impression.

The most inconspicuous of the memorials are two dedicated to former secretaries of state. Embedded in the landscape below the Capitol's entrance, they honor Crip Hall, who filled that office from 1937 to 1961, and his successor Kelly Bryant, who died in office in 1975.

Inanimate objects are featured in two monuments. The Granite Mountain Boulder, a hefty chunk of rock, was placed in 1937 to mark the state's centennial. It was quarried from a mountain about 5 miles away.

Across the street, the Bauxite Boulder pays tribute to the aluminum industry, centered in that town near Little Rock and likely the state's most important industrial contribution to World War II victory. Bauxite ore, refined into aluminum, supplied the material vital to making the tens of thousands of bombers and fighters key to defeating Germany and Japan.

Along with the monuments, the Arkansas State Capitol grounds offer an attraction for visitors tuned to botany. Plantings of trees and other foliage over the years have created what a brochure calls "virtually an arboretum of more than 30 species, including many native Arkansas trees."

A guide with a map and information about the monuments and trees on the Arkansas State Capitol grounds can be downloaded and printed out. Visit the Arkansas secretary of state's website, sos.arkansas.gov, scroll down and click on Tours and Virtual Tours under the heading "For Tourists and Educators."