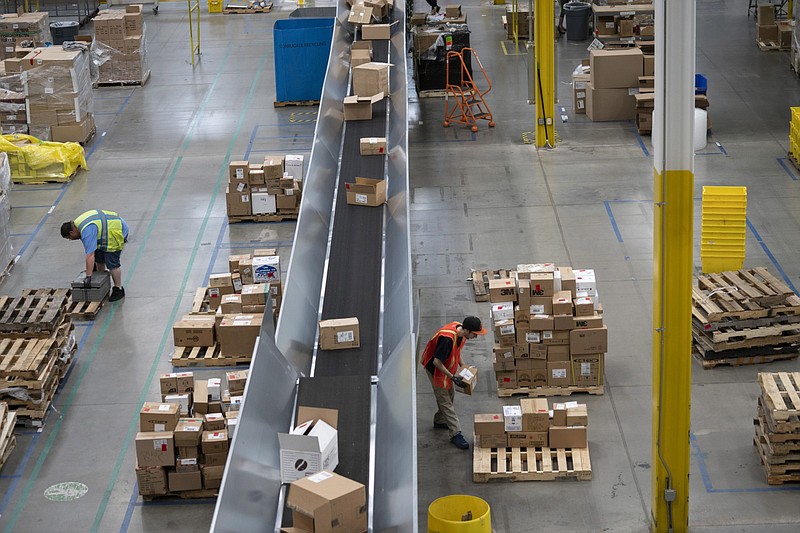 Employees work at an Amazon fulfillment center in Baltimore in 2019. MUST CREDIT: Bloomberg photo by Melissa Lyttle

Amazon is doling out hiring bonuses as high as $3,000 to make sure it has enough people to squeak through the busy holiday shopping season. That's stoking resentment among existing workers who recently got coupons for Thanksgiving turkeys as a thank-you for their hard work.

Social-media chat rooms where Amazon workers congregate have lit up. One worker shared a photo of a $15 turkey voucher, prompting others to boast that they received coupons for $20 or $25, while others lamented that they got nothing. When a worker in Alabama said his warehouse got $10 vouchers, colleagues joked that it was barely enough to buy a turkey leg. Others mordantly counseled fellow workers to look on the bright side -- at least the turkey vouchers were tax-free, unlike the bonuses.

Amazon's willingness to risk dissension in the ranks reflects a dawning reality: Many Americans are reluctant to re-enter the workforce, despite a national unemployment rate of 6.9%, double the pre-pandemic level. Searches for seasonal work dropped 25% from 2019, according to job site Indeed.

To help avoid delivery delays during what's already shaping up to be a blockbuster holiday season, the world's largest online retailer has decided to throw people at the problem, even if it ends up with too many workers. So a few weeks ago, Amazon began dangling signing bonuses. The sums depend on where the recruits live: $3,000 at some facilities in California and Illinois, $2,000 in Maryland and Massachusetts, and $1,500 at many other facilities across the country.

"People who in the past might be thinking about picking up some money moonlighting with a part-time job are now thinking about the covid-19 risk," said Peter Cappelli, a management professor and director of the Center for Human Resources at the University of Pennsylvania's Wharton School. "Many people without jobs still expect to be recalled, so they are having the same thought, whether picking up a short-term job is worth the risk. That's why it is harder to find people even with the high rates of joblessness."

Amazon did not address Bloomberg's queries about staff concerns. The company offers workers a minimum of $15 an hour, health and retirement benefits, job training and opportunities for career growth, Amazon spokeswoman Rachael Lighty said. "We encourage anyone to compare our overall pay, benefits, and workplace environment to other retailers and major employers across the country," she said.

When the outbreak struck the U.S. earlier this year, Amazon was overwhelmed by a spike in orders as Americans avoided stores. To get deliveries back on track and entice fearful workers to show up, the company offered temporary pay raises of $2 per hour as well as unlimited unpaid time off, no questions asked. Amazon also hired 250,000 workers to keep its operation running smoothly and says it will spend more than $10 billion this year fighting the virus in its warehouses.

In June, with Amazon's stuttering delivery machine regaining momentum, the company ended the pandemic raises and began making workers justify requests for time off. The decision was poorly received in Amazon's shipping facilities, but employees had few alternatives. Now, with coronavirus cases resurging across the country, many workers believe it's time their employer brought back the temporary raises, which many equate to hazard pay.

That's why receiving turkey coupons, when newbies are getting bonuses, rankles so much. Some workers see the Butterball-branded vouchers as a slap in the face when they've toiled through the pandemic, helping to push the stock and Chief Executive Officer Jeff Bezos's wealth to record highs. The net worth of the world's wealthiest man has surged more than $67 billion this year to $182.6 billion, according to the Bloomberg Billionaire's index.

"If one worker gets a turkey and another worker gets $3,000, it's the ultimate insult in compensation," said Fred Whittlesey, a compensation expert and former Amazon employee. "People constantly compare. It doesn't matter if it's money, a turkey or a share of stock. If someone got something I didn't get, it immediately creates resentment."

A California warehouse worker, who spoke on the condition of anonymity to avoid angering his employer, said a smiling human-resources representative handed him a $15 turkey voucher at the end of his shift. He used it to buy carne asada. "I was going to put it in the bank because it looked like a check, but it was a grocery voucher you couldn't redeem for cash," the worker said. "They usually give us a few pieces of turkey and an extra 15 minutes for lunch break, but they can't this year because of social distancing."

Amazon has been a primary beneficiary of the pandemic since so many businesses closed during lockdowns and many Americans prefer shopping online to the risk of visiting stores that remain open.

Amazon gets nearly 40 cents of every dollar spent online, according to EMarketer, making it the biggest beneficiary. Amazon's advantage over other retailers grows late in the holiday season thanks to its reputation for prompt delivery.

Amazon warehouse workers in Alabama have filed a petition with the U.S. National Labor Relations Board to form a union.

The federal agency posted a notice dated Friday for a hearing to determine if the petition meets the criteria to advance to the next step. With enough support, it'll proceed to a vote among those working at the warehouse outside Birmingham on whether to unionize and be represented by the Retail, Wholesale and Department Store Union. The recently opened facility in Bessemer employs about 1,500 people.