It, Nevada give electors to Biden by Compiled by Democrat-Gazette Staff From Wire Reports | November 25, 2020 at 7:10 a.m. 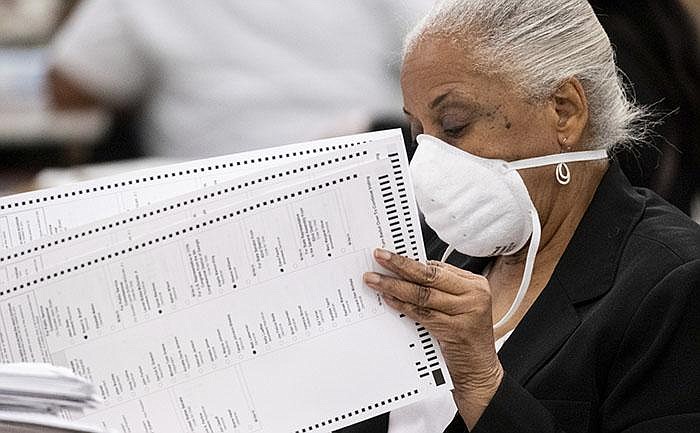 Workers sort and stack ballots in preparation for scanning during a recount, Tuesday, Nov. 24, 2020, in Lithonia, Ga. County election workers across Georgia have begun an official machine recount of the roughly 5 million votes cast in the presidential race in the state. The recount was requested by President Donald Trump after certified results showed him losing the state to Democrat Joe Biden by 12,670 votes, or 0.25% (AP Photo/Ben Gray)

The state of Pennsylvania certified its election results Tuesday, as Gov. Tom Wolf signed off on the slate of 20 electors and solidified President-elect Joe Biden's victory in the state where he was born.

But the certification in Pennsylvania, a state Biden won by more than 80,000 votes, resonated as it officially marked the state as having moved from red to blue.

It followed the certification of the results in Michigan on Monday and Georgia on Friday, states that, like Pennsylvania, Trump won in 2016 and Biden flipped.

[Video not showing up above? Click here to watch » https://www.youtube.com/watch?v=EeIkv8ri3UI]

In Pennsylvania, the Trump campaign and Republican allies had tried to halt the certification for weeks through a flurry of litigation, yet they were rebuffed by judges who found the effort lacked any evidence of fraud. The campaign had most recently asked the 3rd U.S. Circuit Court of Appeals to block certification in Pennsylvania. But some legal experts have argued that if the state officially certified its results before the court made a decision, the case would be considered moot.

The Biden campaign took aim at the legal efforts to disqualify votes Tuesday and predicted that the Trump campaign's continued lawsuits were destined to fail.

"It's readily apparent to everyone besides Donald Trump, Rudy Giuliani and Jenna Ellis that this election is over and that Joe Biden won resoundingly," Bob Bauer, a senior adviser to Biden, said in a statement after the certification was announced.

"Trump did everything he could to disenfranchise voters and stop the results from being certified in Pennsylvania, including filing over 15 unsuccessful lawsuits -- most recently producing one of the more embarrassing courtroom performances of all time, with the judge in the case ruling that their arguments were 'without merit' and 'unsupported by evidence.'"

Wolf, in announcing the certification, praised the election workers in his state who had faced harsh criticism and harassment.

"I want to thank the election officials who have administered a fair and free election during an incredibly challenging time in our commonwealth and country's history," Wolf said in a statement on Twitter. "Our election workers have been under constant attack and they have performed admirably and honorably."

Pennsylvania's 20 electors, a mix of elected Democrats, party activists and other staunch Biden backers, will meet in the state Capitol on Dec. 14.

One of them, state Democratic Party Chairman Nancy Patton Mills, said she will also lead the Electoral College's meeting in Harrisburg next month.

Patton Mills said she was gratified that Pennsylvania was "the state that made it possible" for Biden to win.

Multiple counties across Pennsylvania had certified their results Monday amid some scattered efforts by local Republicans to halt the process.

The state had been specifically targeted by Giuliani, the former mayor of New York and personal lawyer to the president, who repeatedly made allegations of widespread fraud.

Shortly after the election, Giuliani delivered a news conference at Four Seasons Total Landscaping in northeastern Philadelphia, declaring that the city's election had been marred by fraud and obstruction. Numerous judges would later reject those claims in court.

Although Wolf has certified the results in the state, there are still some outstanding lawsuits regarding smaller amounts of ballots in specific counties that need to be sorted, though they will have no significant effect on the presidential margins.

Also Tuesday, the Nevada Supreme Court made Biden's win in the state official, approving the state's final canvass of the Nov. 3 election.

The unanimous action by the seven nonpartisan justices sends to Democratic Gov. Steve Sisolak results that will deliver six electoral votes from the western U.S. battleground state to Biden.

The court action drew extra scrutiny amid legal efforts by the state GOP and Trump campaign to prevent sending vote-by-mail ballots to all 1.82 million active registered voters and then to stop the counting of the 1.4 million votes that were cast.

Biden won Nevada by 33,596 votes, according to results approved by elected officials in Nevada's 17 counties -- including Clark County, which encompasses Las Vegas, and Washoe County, which includes Reno.

Nevada Secretary of State Barbara Cegavske, a Republican, presented the results to the court.

She noted the first-ever use of all-mail balloting statewide in a general election, same-day voter registration and early voting.

"The result was more of a hybrid model where voters had a choice of how to participate," she said, adding that a record number of voters participated.

Certification of the vote does not stop several lawsuits pending in state and federal courts.

They include bids by two Republican congressional candidates and a state Senate challenger to obtain re-votes in those races, an open-records case by the state GOP, and a U.S. District Court action alleging that thousands of ineligible people voted.

A federal judge in that case declined a bid for an immediate injunction that would have stopped the use of a signature verification scanner during the vote count.

Jesse Binnall, an attorney for the Trump campaign who is handling an election challenge pending before a state court judge, said Tuesday he intends to prove that so many fraudulent votes were cast statewide that Trump won Nevada.

Meanwhile, county election workers across Georgia on Tuesday began a machine recount of the roughly 5 million votes cast in the presidential race in the state, just days after completing a hand tally that confirmed Biden's lead.

The recount was requested by Trump after certified results showed him losing the state to Biden by 12,670 votes, or 0.25%. Under state law, the losing candidate can request a recount when the margin is less than 0.5%. Trump's campaign on Saturday formally requested the recount.

Counties were allowed to begin the machine recount at 9 a.m. Tuesday and they have until 11:59 p.m. on Dec. 2 to wrap it up.

Some counties only planned to get as far as testing the equipment Tuesday, with the actual counting to begin today. With interruptions for the Thanksgiving holiday expected, the secretary of state's office instructed counties to publicly post when they would be testing so political party monitors and interested members of the public can make plans to observe.

State election officials have said that it's possible the results of the recount could be slightly different from the original tally, but they've said it's very unlikely it would be enough to change the overall outcome of the election.

Biden's campaign echoed that in a call Tuesday with reporters.

"Georgia voters have selected Joe Biden to be their next president," Biden campaign attorney Patrick Moore said. "We're confident that this second recount, which is in fact a third time the votes have been counted, will simply reaffirm Joe Biden's victory in Georgia."

In Wisconsin, Republicans filed a lawsuit Tuesday asking the state's Supreme Court to block certification of the presidential election results even as a recount is ongoing.

The lawsuit echoes many of the same arguments Trump is making in trying to have tens of thousands of ballots discounted during the recount. The lawsuit also rehashes a claim that a federal court rejected in September that Facebook CEO Mark Zuckerberg tried to "illegally circumvent Wisconsin absentee voting laws" through grants awarded by a nonprofit center he funds.

At least 10 cases have been filed across the country seeking to halt certification in parts of all of key battleground states, including lawsuits brought by the Trump campaign in Michigan and Pennsylvania. So far none have been successful.

Wisconsin's election results are scheduled to be certified Tuesday.

The Wisconsin lawsuit was filed by attorney Erick Kaardal, a former Minnesota Republican Party official who also represented rapper Kanye West in his unsuccessful lawsuit attempting to get on the ballot in Wisconsin. Kaardal represents a conservative group called the Wisconsin Voters Alliance and a host of Republican voters.

Kaardal also filed an unsuccessful federal lawsuit in Wisconsin that attempted to block $6.3 million from being awarded to five heavily Democratic cities from the nonprofit Center for Technology and Civic Life, which is primarily funded by Zuckerberg and his wife. A judge tossed the lawsuit that argued the money amounted to bribery to bolster Democratic turnout in Green Bay, Kenosha, Madison, Milwaukee and Racine.

Many of the same arguments alleging the money was illegally awarded and therefore the election results should be nullified are being made in the new lawsuit in state court.

Information for this article was contributed by Nick Corasaniti of The New York Times; and by Mark Scolforo, Ken Ritter, Scott Bauer and staff members of The Associated Press.