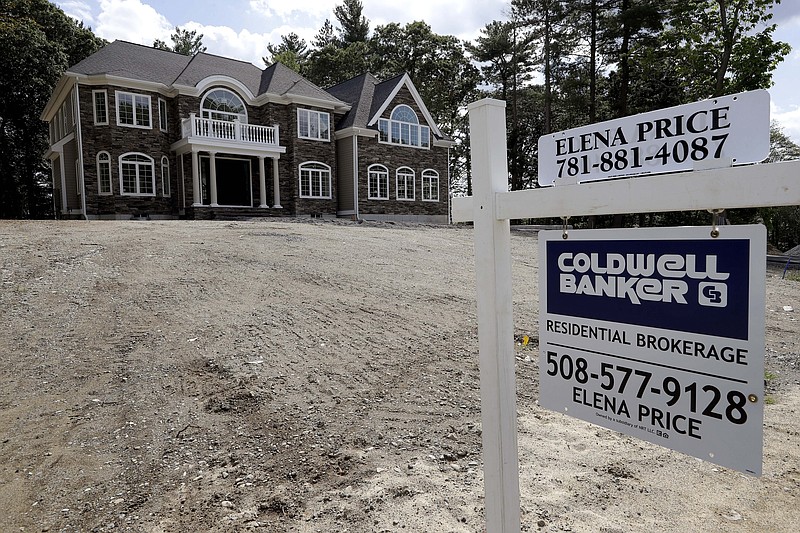 FILE - In this Sept. 3, 2019 file photo a sign rests in front of a newly constructed home, in Westwood, Mass. U.S. home prices rose in April for the eighth straight month, even as sales have stumbled, a sign the coronavirus outbreak has had little impact on real estate values. The S&P CoreLogic Case-Shiller 20-city home price index climbed 4% in April, the largest gain since December 2018, up from 3.9% in March. (AP Photo/Steven Senne, File)

The S&P CoreLogic Case-Shiller 20-city home price index, released Tuesday, showed that home prices rose 6.6% in September from a year earlier, much higher than its 5.3% increase in August. That is the biggest increase since April 2018.

The viral pandemic disrupted the spring homebuying season, pushing many sales into the late summer and fall. Home sales jumped to the highest level in 14 years in September, a sign that the increased ability of some Americans to work from home and the desire for more space is spurring greater demand.

Prices skyrocketed 11.4% in Phoenix compared with a year earlier, the biggest gain nationwide. Seattle reported the second-highest increase, at 10.1%, followed by San Diego at 9.5%.

The number of homes for sale dropped in September to the lowest level since records began in 1982, according to the National Association of Realtors. And last week mortgage rates fell to a record low of 2.72%, according to mortgage buyer Freddie Mac.

While sales would typically slow down this time of year, demand has remained strong as buyers look to take advantage of low rates.

"The delayed spring homebuying season fueled sales well into October and past the time when they would normally begin to slow down," said George Ratiu, an economist at Realtor.com "Heading into winter, demand continues to be strong."

Home prices are rising broadly across the country. In September, 19 cities in the S&P 20-city index reported bigger price gains compared with a year ago than in August. The 20th city, Detroit, has reported delays at its recording office because of the pandemic and did not have enough data to calculate price changes.

On a quarterly basis, home prices surged the most on the record in the third quarter, according to a separate report Tuesday from the Federal Housing Finance Agency.

Prices jumped 3.1% compared with the second quarter. That was the biggest gain in records dating to 1991, according to agency.

Compared with 2019, prices were up 7.8% in the three months through September, the biggest jump since 2006.

Information for this article was contributed by Christopher Rugaber of The Associated Press and by Prashant Gopal of Bloomberg News.