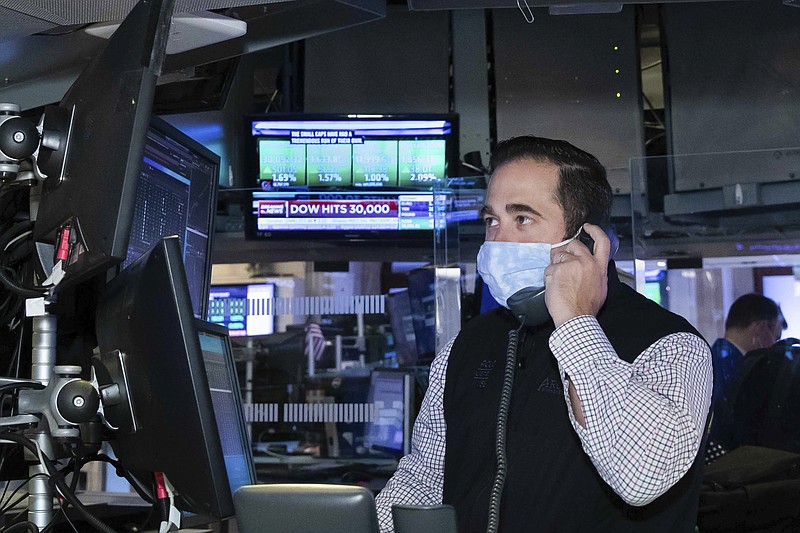 A trader at the New York Stock Exchange works at his terminal, Tuesday, November 24, 2020. The Dow Jones Industrial Average traded above 30,000 points for the first time as investors were encouraged by the latest progress on developing coronavirus vaccines and news that the transition of power in the U.S. to President-elect Joe Biden will finally begin. (Nicole Pereira/NYSE via AP)

The Dow Jones Industrial Average closed above 30,000 points for the first time Tuesday as progress in the development of coronavirus vaccines and news that the transition of power in the U.S. to President-elect Joe Biden will finally begin kept investors in a buying mood.

In another signal that investors were feeling confident, the Russell 2000 index of smaller stocks outpaced the broader market, picking up 35.23 points, or 1.9%, to 1,853.53, also a record high.

The gains extend a monthlong market rally driven by growing optimism that development of coronavirus vaccines and treatments will loosen the pandemic's stranglehold on the economy. They also mark a rapid climb for the Dow from its March 23 low of just under 18,600 during the worst of its early pandemic nosedive.

"The stock market's just broken 30,000 -- never been broken, that number," he said. He went on to congratulate his administration and the American people, "because there are no people like you," before quickly leaving the lectern.

[Video not showing up above? Click here to watch » https://www.youtube.com/watch?v=PzHHQiNLgmk]

On Monday, nearly three weeks after the election, the head of the General Services Administration, Emily Murphy, formally notified Biden that the transfer of power could begin. Trump later tweeted his approval of the process but didn't concede.

"We are one step closer to moving past the election uncertainty," said Lindsey Bell, chief investment strategist at Ally Invest. "People are still optimistic about what 2021 has to bring, from an economic perspective and an earnings perspective."

Traders continued to favor stocks that stand to gain the most from a gradual reopening of the economy, such as banks and industrial companies. Technology and communication stocks, which have been investor favorites through the pandemic, also helped lift the market.

"There's some relief that Biden is choosing moderates to fill out the Cabinet," said Barry Bannister, head of institutional equity strategy at Stifel. Bannister also said the encouraging vaccine news continues to give hope that there is an end in sight to the pandemic.

Word that Biden has chosen Yellen as treasury secretary also added to investors' confidence. Widely admired in the financial world, Yellen would take on a pivotal role to help shape policies at a perilous time.

"She's also pretty pro-fiscal stimulus and she's able to effectively work with people across the aisle," Bell said. "She showed that in her time at the Fed."

A renowned economist, Yellen, 74, helped the nation recover from the previous recession. She was a professor before taking on top roles at the Fed, eventually becoming the first woman to lead the central bank. If confirmed by the Senate, she will become the first woman to helm the Treasury Department.

Stocks have been pushing higher this month, driving the S&P 500 up by more than 11%, as investors have grown more hopeful that the development of coronavirus vaccines and treatments will help pave the way for the economy to recover next year.

On Monday, drugmaker AstraZeneca reported surprisingly good results from ongoing vaccine studies. It said its potential vaccine, which is being developed with Oxford University, was up to 90% effective. Unlike rival candidates, AstraZeneca's doesn't have to be stored at ultralow temperatures, making it easier to distribute.

Last week, Pfizer and Moderna both reported study results showing their vaccines were almost 95% effective. And, over the weekend, Regeneron Pharmaceuticals received U.S. government approval for emergency use of its covid-19 treatment. The drug, which Trump received when he was sickened last month, is meant to try to prevent hospitalization and to keep the disease from getting worse in patients with mild-to-moderate symptoms.

The vaccine developments are tempering lingering concerns over rising virus cases in the U.S., as well as in Asia and other parts of the world, and new government restrictions on businesses aimed at limiting the spread.

Treasury yields rose as investors became more optimistic about the prospects for economic growth. The yield on the benchmark 10-year Treasury note rose to 0.88% from 0.84% late Monday.

U.S. markets will be closed Thursday for the Thanksgiving holiday. They will be open for half the day on Friday, closing at noon.

Information for this article was contributed by Alex Veiga and Damian J. Troise of The Associated Press and by Hannah Denham and Hamza Shaban of The Washington Post. 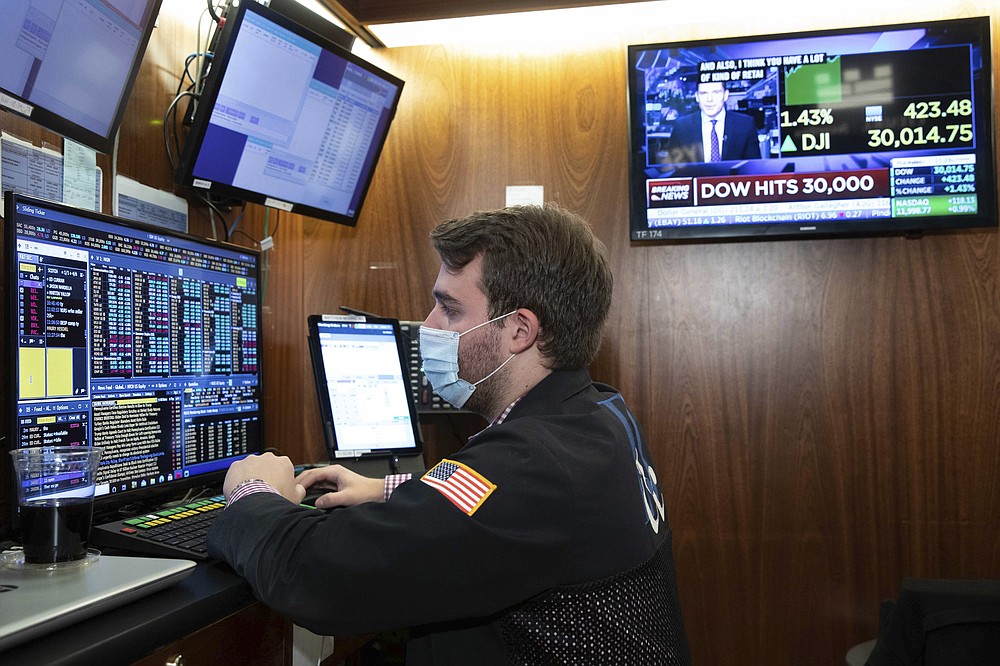 A trader at the New York Stock Exchange works at his terminal, Tuesday, November 24, 2020. The Dow Jones Industrial Average traded above 30,000 points for the first time as investors were encouraged by the latest progress on developing coronavirus vaccines and news that the transition of power in the U.S. to President-elect Joe Biden will finally begin. (Nicole Pereira/NYSE via AP)
ADVERTISEMENT