Pennsylvania court to hear case today on mail-ballot legality by Compiled by Democrat-Gazette Staff From Wire Reports | November 26, 2020 at 7:57 a.m. 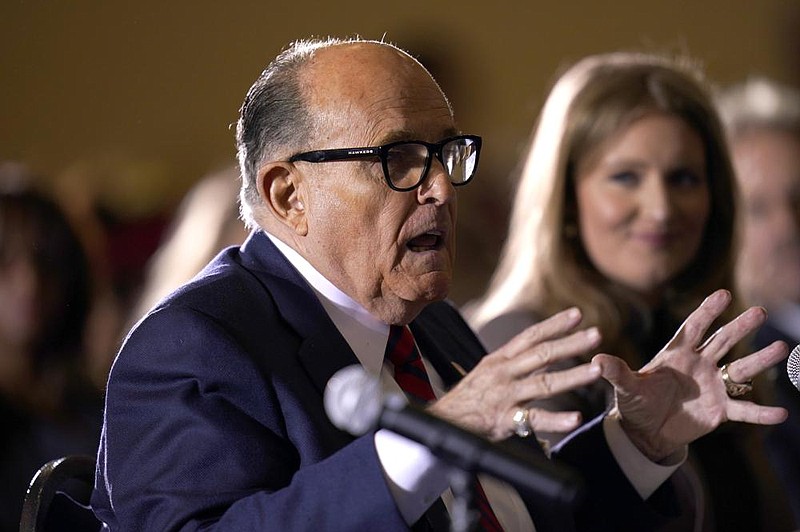 PITTSBURGH -- Pennsylvania is prohibited from certifying the rest of its election results in down-ballot races -- and from taking any further action in regard to this week's certification of the presidential race -- pending a hearing today in an appellate court.

The Commonwealth Court of Pennsylvania, in an order signed by Judge Patricia McCullough, issued an injunction Wednesday that stops the state from continuing its certification, and intends to hear evidence in a case filed by U.S. Rep. Mike Kelly and GOP congressional candidate Sean Parnell about the constitutionality of mail-in ballots.

The hearing will be held early today.

The state certified the results in the race for president on Tuesday, giving its 20 electoral votes to Democrat Joe Biden and his running mate, California Sen. Kamala Harris. The court order said the state is prohibited from acting "to the extent that there remains any further action to perfect the certification of the results" of the races for president and vice president.

The plaintiffs argued an injunction could still be issued even though the certification had taken place, pointing out that a number of formal steps remained, including issuing commissions to elected candidates. The state's "duties with regard to finalization of the full election results are far from complete," they said in a motion on Tuesday.

[Video not showing up above? Click here to watch » https://www.youtube.com/watch?v=2jOSO3TeUrw]

Pennsylvania Attorney General Josh Shapiro wrote on Twitter: "This order does not impact yesterday's appointment of electors. We will be filing an appeal with the Pennsylvania Supreme Court momentarily."

Kelly and Parnell are arguing that state lawmakers violated Pennsylvania's Constitution by adopting Act 77 last year, which expanded the mail-in balloting option to let all qualified voters cast ballots by mail without an excuse. They allege that absentee voting -- which required an excuse from a set of allowed reasons -- was rebranded as no-excuse mail-in voting "absent any constitutional authority."

The Republican-controlled state Legislature responded, in legal filings, that the case should be dismissed because Act 77 didn't alter the requirements of who constitutes a qualified voter, and that the Legislature is constitutionally authorized to prescribe the method by which those electors may cast their votes.

Lawyers for Secretary of State Kathy Boockvar, Gov. Tom Wolf and the state -- also named as defendants in the suit -- noted that Act 77 said all constitutional challenges were to be lodged within 180 days of effective date, which "came and went without any facial challenge to the constitutionality of Act 77's provisions."

"At no time during the 180-day period, the run-up to the primary election, or the run-up to the general election did Petitioners (or anyone else) claim in any proceeding that Act 77 was unconstitutional on its fact," the state's lawyers wrote, noting that Kelly and Parnell ran in the 2020 primary and general election, "presumably garnering votes cast on the same mail-in ballots that they now claim to be unconstitutional."

Separately, Trump called into a meeting of Pennsylvania Republican lawmakers examining accusations of election impropriety, repeating his claims that his loss to Biden was illegitimate.

"This election was lost by the Democrats. They cheated, it was a fraudulent election," Trump could be heard saying on a phone that campaign lawyer Jenna Ellis held up to a microphone at the hearing.

Ellis sat alongside Rudy Giuliani, the president's personal lawyer who has been leading a long-shot legal effort in several states to reverse the results of the Nov. 3 election.

Trump had planned to travel to the hearing Wednesday in Gettysburg but scrapped the trip earlier in the day. The visit had not been listed on the president's public schedule, but people familiar with the matter said he intended to appear alongside Giuliani.

In Pennsylvania, where Biden leads by more than 80,000 votes, Trump supporters have complained that observers in Philadelphia were not allowed to be closer to workers counting the ballots, but have failed to present evidence of widespread fraud.

"The election is over. Virtually everyone on Earth has accepted that truth except for Donald Trump and Rudy Giuliani," she said during a call with reporters on Wednesday. "The Trump campaign has been laughed out of every courtroom with their meritless and baseless lawsuits meant to undermine the will of the American people. This is a sideshow."

Information for this article was contributed by Julian Routh of the Pittsburgh Post-Gazette; and by Erik Larson, Jennifer Jacobs and Justin Sink of Bloomberg News.