U.S. denies permit for mine near Alaska salmon fishery 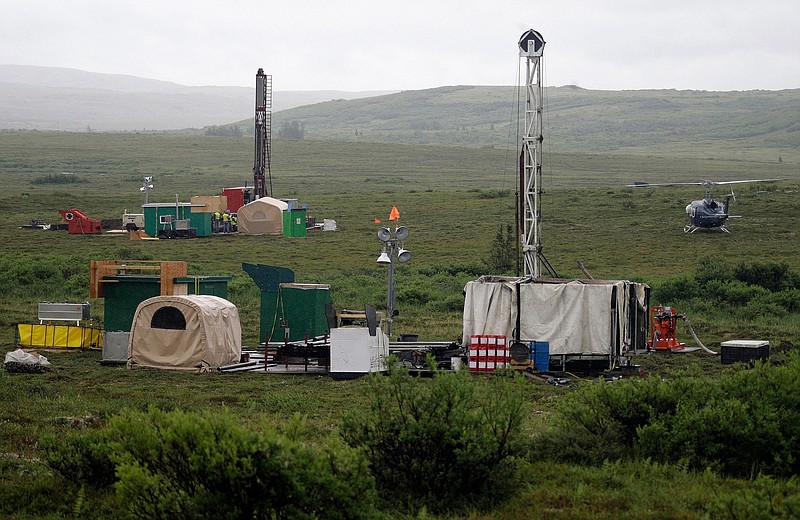 FILE - In this July 13, 2007, file photo, workers with the Pebble Mine project test drill in the Bristol Bay region of Alaska, near the village of Iliamma. A proposed gold and copper mine at the headwaters of the world's largest sockeye salmon fishery in Alaska would cause "unavoidable adverse impacts," the U.S. Army Corps of Engineers said in a letter to the developer released Monday, Aug. 24, 2020. The corps is asking the backers of Pebble Mine to come up with a mitigation plan within 90 days for nearly 3,000 acres of land and nearly 200 miles of streams it says could be affected if the controversial mine moves forward. (AP Photo/Al Grillo, File)

ANCHORAGE, Alaska -- The Trump administration on Wednesday denied a permit for a controversial gold and copper mine near the headwaters of the world's largest sockeye salmon fishery in southwest Alaska.

The Army Corps of Engineers said in a statement that the permit application to build the Pebble Mine was denied under both the Clean Water Act and the Rivers and Harbors Act.

The agency "concluded that the proposed project is contrary to the public interest," according to the statement from Col. Damon Delarosa, commander of the Corps' Alaska district.

Pebble partnership Chief Executive Officer John Shively said he was dismayed, especially after the Corps had indicated in an environmental impact statement in July that the mine and fishery could coexist.

"One of the real tragedies of this decision is the loss of economic opportunities for people living in the area," Shively said in a statement. The environmental review "clearly describes those benefits, and now a politically driven decision has taken away the hope that many had for a better life. This is also a lost opportunity for the state's future economy."

The denial comes as somewhat of a surprise.

The Corps of Engineers in July released an environmental review that the mine developer saw as laying the groundwork for key federal approvals. The review said that under normal operations, Pebble Mine, proposed for southwest Alaska's Bristol Bay region, "would not be expected to have a measurable effect on fish numbers and result in long-term changes to the health of the commercial fisheries in Bristol Bay."

However, in August, the Corps said that it had determined that discharges at the mine site would cause "unavoidable adverse impacts to aquatic resources" and laid out required efforts to reduce those effects. That prompted Alaska's Republican U.S. senators to oppose the project. Sen. Dan Sullivan, who won reelection in November, went so far as to declare the project "dead."

Canada-based Northern Dynasty Minerals Ltd., which owns the Pebble Limited Partnership, said it had submitted a mitigation plan on Nov. 16.

If the project were to have secured approval from the Corps, there was still no guarantee it would have been built. It would have needed state approval, and President-elect Joe Biden has expressed opposition to the project.

Last year, the U.S. Environmental Protection Agency withdrew restrictions on development that were proposed -- but never finalized -- under the Obama administration and said it planned to work with the Corps to address concerns.

Critics of the project saw Pebble as getting a lifeline under the Trump administration. However, Trump's eldest son, Donald Trump Jr., was among those who voiced opposition earlier this year. The president said in August that he would "listen to both sides" on the issue.

The Pebble partnership had praised the Corps' environmental review, while critics of the project said it lacked scientific rigor.

Information for this article was contributed by Becky Bohrer of The Associated Press.