Experts say people now taking too many risks by Compiled by Democrat-Gazette Staff From Wire Reports | November 26, 2020 at 7:56 a.m. 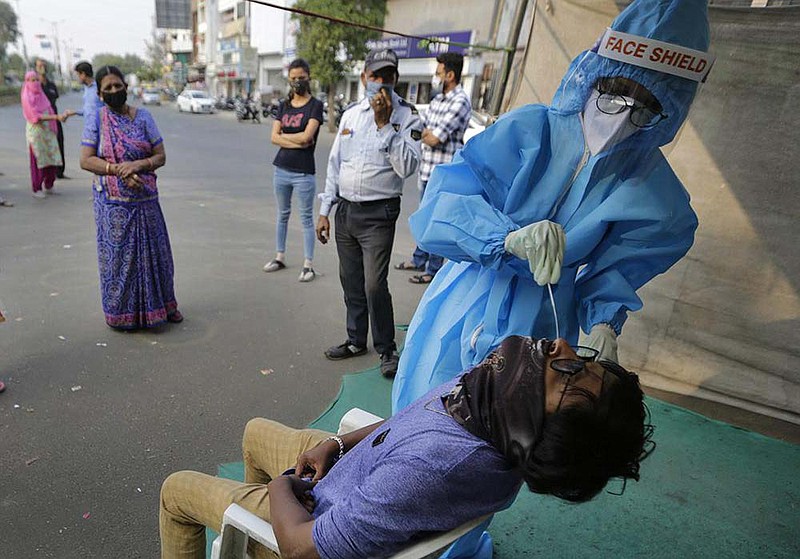 A health worker takes a nasal swab sample for a coronavirus test Wednesday at a facility set up in Ahmedabad, India. India has more than 9 million cases of covid-19, behind only the United States. (AP/Ajit Solanki)

Over the past two months, rural counties and midsize cities in the Great Plains and Upper Midwest have been the main drivers of the dizzying growth in U.S. coronavirus cases.

But the virus appears to have entered a new phase in recent days: The reason the country is continuing to break case records has less to do with North Dakota and Wisconsin than it does with swift resurgences of the virus in cities like Baltimore, Los Angeles, Miami and Phoenix and with first-time spikes in smaller cities away from the nation's middle, like Cumberland, Md.

"Our people are tired," said Maggie Hansen, chief nursing executive at Memorial Healthcare System in south Florida. "They're tired, and they don't see an end in sight."

Coronavirus cases are emerging in their highest numbers of the pandemic, with more than 175,000 a day, on average, in a country that has seen more cases and more deaths than anywhere else in the world. More than 1.2 million cases have been identified in the United States in the past week, and the country is on pace to reach 13 million known cases in the coming days. Deaths are also rising fast, with more than 2,200 announced nationwide Tuesday, the most on a single day since early May.

The spread of the virus rages on in the Great Plains and the Upper Midwest. Iowa and South Dakota continue to report new cases at some of the highest rates in the country, and deaths there have reached their highest levels on record. But the pace of the spread has slowed in those regions while rapidly increasing in other, more populous parts of the country, including in California, where more than 17,000 cases were announced Monday, and in Texas, where more than 20,000 cases were announced Tuesday, the two highest daily totals of any state during the pandemic.

All of this has been unfolding on the eve of what infectious-disease experts see as a likely turning point for the outbreak in this country. Dr. Eli Perencevich, an infectious-disease physician and epidemiologist at the University of Iowa, said he feared the worst was still to come in his state, especially with Thanksgiving gatherings and cold weather looming.

"Human behavior is very different indoors versus outdoors when it gets cold, so I'm worried that's going to make things worse," said Perencevich, who has treated coronavirus patients. "And then we know Thanksgiving, where we're all just bracing, given that the hospitals are completely full."

Unlike in the spring, when the Northeast faced the worst, and the summer, when the Sun Belt saw explosive growth, this latest surge has begun to move beyond a single region. In fact, it is elbowing back into places like New York City that had brought earlier outbreaks under control and tearing through cities that had not seen many cases all along.

[Video not showing up above? Click here to watch » https://www.youtube.com/watch?v=Bfb_xlaXM5Y]

"People just wanted some normalcy and got loose, and here you are," said Cyndi Kirkhart, who runs a food bank in Huntington, W.Va., an area that is averaging a record 250 cases daily, more than triple the number from a month ago. "With the pandemic fatigue and all the politics stuff getting close to Election Day, there were so many things that contributed."

The marginal progress in the Midwest comes after governors in some states, including Illinois, Iowa and North Dakota, imposed additional restrictions, and after hospital leaders across the region issued public warnings that they were running out of capacity to treat the sick.

In Wisconsin, which for weeks reported explosive growth, reports of new cases continued rising, but by 4% over the past two weeks. In Nebraska, which also saw runaway growth, the curve has flattened, with 1% growth. And in Illinois, which has averaged more than 10,000 cases per day, infection numbers also have leveled off, especially around Chicago.

"This is going to take weeks, not days," Gov. J.B. Pritzker of Illinois said this week. "But is there a glimmer of hope? There is."

Any incremental improvements in the Midwest has been more than offset by growing outbreaks elsewhere in the country. In Los Angeles County, where cases have soared past the levels seen this summer, to an average of more than 4,000 a day, restaurants can no longer offer indoor or outdoor dining, a restriction that started Wednesday evening. Around Miami, reports of new cases have more than quadrupled since the start of October, although they remain below the peak levels seen in July.

"We fully anticipate it's going to increase, but we just want to do whatever we can to not get into the same position we were over the summer," said Dr. Peter Paige, who was recently appointed the chief medical officer of Miami-Dade County. "It's a real threat."

Epidemiologists and public-health officials around the country said the reason for resurging outbreaks could be explained by a simple variable: what people choose to do.

"The virus itself hasn't changed -- what has is our behavior," Bogen said.

Meanwhile, millions of Americans took to the skies and the highways ahead of Thanksgiving, disregarding warnings that they stay home and limit their holiday gatherings to members of their own households.

While the number of Americans traveling by air over the past several days was down dramatically from the same time last year, many pressed ahead with their holiday plans as deaths, hospitalizations and confirmed infections skyrocket across the U.S.

Some were tired of more than eight months of social distancing and determined to spend time with loved ones.

"I think with the holidays and everything, it's so important right now, especially because people are so bummed out because of the whole pandemic," said 25-year-old Cassidy Zerkle of Phoenix, who flew to Kansas City, Mo., to visit relatives.

She took snacks and her own hand sanitizer and said the flight was half full. She had a row of seats to herself.

"As long as you're maintaining your distance, you're not touching stuff and you're sanitizing your hands, people should see their families right now," she said.

The Centers for Disease Control and Prevention and state and local authorities have begged people not to travel and urged them to keep their Thanksgiving celebrations small.

"That'll make sure that your extended family are around to celebrate Christmas and to celebrate the holidays next year," Kentucky Gov. Andy Beshear said.

Around 900,000 to 1 million people per day passed through U.S. airport checkpoints from Friday through Tuesday, a drop-off of around 60% from the same time a year ago. Still, those have been some of the biggest crowds since the covid-19 crisis took hold in the U.S. in March.

Last year, a record 26 million passengers and crew passed through U.S. airport screening in the 11-day period around Thanksgiving.

More Americans drive than fly during the holiday, but AAA has projected those numbers are also likely to be lower this year. How much lower the auto club has not said.

In California, with the state battling an out-of-control coronavirus surge, the state's health secretary is urging families to avoid gathering for Thanksgiving and Los Angeles County appeared on the brink of issuing a stay-home order to prevent hospitals from being overwhelmed.

"It's as important to say no even when it comes to the closest people in our family" Dr. Mark Ghaly said as counties continued to see record covid-19 infection caseloads and hospitalizations.

Ghaly, whose mother won't be at his family's dinner table this year, said it wasn't too late to cancel or change plans to limit Thanksgiving celebrations to immediate family.

Residents were urged to avoid nonessential travel during what is typically the busiest travel period of the year. Anyone entering California was advised to quarantine for two weeks.

Public-health officials are bracing for a wave of cases in upcoming weeks that could stem from gatherings at Thanksgiving, particularly as people arrive or return from states or areas with higher infection rates.

"If you're a public-health person, you just start crying when you hear those numbers," Ferrer said, noting the effect will likely be felt in the weeks to come because of a lag between exposure and developing symptoms of covid-19.

Elsewhere, the top elected official for El Paso County, Texas, on Tuesday announced a new curfew to help combat the spread of the coronavirus, which is overrunning the border area's hospitals and funeral homes.

County Judge Ricardo Samaniego said the curfew was expected to go into effect Wednesday and would run 10 p.m. to 5 a.m. The curfew is set to end Monday.

The curfew is not as rigid as previous ones the county has ordered during the pandemic as it is designed to stop social and recreational activities, Samaniego said. Residents still will be able to go to essential and nonessential businesses, he said.

"I will use every tool that I have such as issuing a curfew to slow the spread of this virus," Samaniego said during a news conference Tuesday evening.

Samaniego said he is also asking businesses to help limit large crowds during holiday shopping this weekend. He also asked residents to shelter at home and limit their outings to stores and to celebrate Thanksgiving with only the members of their households and have virtual celebrations with other relatives.

Samaniego said he worried many more people might die because of the worsening situation El Paso finds itself in.

If these guidelines are followed, "those individuals will have many, many more Thanksgivings ... many more opportunities to be with their families," he said.

Separately, officials in Puerto Rico announced Wednesday that the U.S. territory expects to receive its first covid-19 vaccines by mid-December as the island hits a record number of daily cases and hospitalizations.

Health care workers, teachers and certain public sector employees are among those who will take priority, officials said.

"This will be the best gift we can receive," said Health Secretary Lorenzo Gonzalez.

Puerto Rico requested 1 million vaccine doses, but not all are expected to arrive at once, said Jose Reyes, adjutant general of the Puerto Rico National Guard, which will help distribute them.