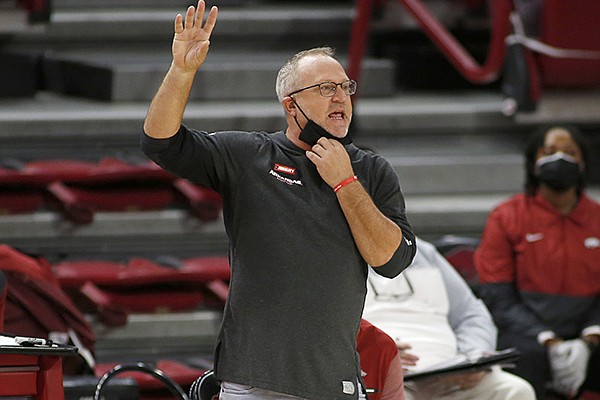 Arkansas coach Mike Neighbors is shown during a game against Oral Roberts on Wednesday, Nov. 25, 2020, in Fayetteville. ( David Gottschalk)

FAYETTEVILLE -- University of Arkansas women's basketball Coach Mike Neighbors wanted a schedule that would challenge his team despite the covid-19 pandemic.

With a season-opening win safely tucked away, the No. 14 Razorbacks are in Fort Myers, Fla., to participate in the Gulf Coast Showcase and play three games in three days beginning this morning with a 10:30 a.m. tip-off against Wake Forest.

Neighbors pointed out that no other team in the country will have played four games after Sunday.

"We'll know as much about our team as anybody in the country come Sunday night," Neighbors said.

With several cancellations already this week because of the virus, the Razorbacks' game against No. 12 Maryland on Sunday could also be the first matchup of the season between ranked teams and draw national attention, Neighbors said.

In between, Arkansas will face host Florida Gulf Coast, in a matchup of two of the top three-point shooting teams in the country, on Saturday.

But that one will be the Razorbacks' fourth game in five days. Neighbors said the Razorbacks started preparing for this stretch beginning last week in practice by limiting reps. The plan for Wednesday's opener also worked out almost perfectly as far as minutes played, too, Neighbors said.

"Eerily close to what we predicted," Neighbors said. "We didn't want anybody to play more than 30 minutes and everybody to play at least five. With three games in the next four days against really high quality opponents ... Maybe that pays off on Sunday when we're trying to scrape one out against Maryland down there on the beaches of Florida."

Arkansas wasn't originally scheduled to play at Florida, but the pandemic changed their scheduling plans like many around the country. The Razorbacks were supposed to play in an event at Loyola Marymount, but that got scrapped early on, Neighbors said.

Many teams are opting not to travel too far from home for nonconference games, but Neighbors said the Gulf Coast Showcase presents a great challenge in a safe environment.

"We'll be in a bubble down there," Neighbors said. "And they are providing PCR testing for our fans on a day-to-day basis. We're going down there with a lot of confidence that we can compete safely and obviously against really, really good competition.

"Wake Forest has four starters back and their expectations are high in the ACC. Florida Gulf Coast wins 30 games a year and Maryland practices every day beneath a national championship banner."

There's also a little familiarity for graduate transfer Destiny Slocum, who started her career at Maryland.

Arkansas will have a leg up on Wake Forest, a team that returns four starters from a 16-16 team. The Razorbacks come to Florida with a game under their belt, while the Demon Deacons will open the season against Arkansas.

Slocum led five Razorbacks in double figures with a game-high 22 points in Arkansas' 96-49 win over Oral Roberts on Wednesday. It was the first game in a Razorbacks uniform for the 5-7 guard. She thought Neighbors' system fit her game well and it showed.

"I think the entire offense and the entire system works for me," Slocum said. "And that's why I chose to come here, and that's where I think my game fits the best and I think that showed."

Neighbors' high-powered offense could meet an interesting match against a Florida Gulf Coast team that actually attempted and made three-point shots at a higher rate than the Razorbacks a year ago.

Florida Gulf Coast averaged 12 made three-pointers per game last season, the best in the nation. Arkansas ranked third at 9.8. The Eagles made 10 in Wednesday's 86-40 season-opening win over Florida Memorial.

However, the Eagles lost their top seven scorers off a team that won 30 games. They also boosted this year's roster with four transfers and three freshmen. Florida Gulf Coast is still awaiting eligibility clearance for Kierstan Bell, who made the Big Ten All-Freshman Team at Ohio State last year.

CHALK TALK The Razorbacks will take on Florida Gulf Coast on its home floor at 1:30 p.m. Saturday, then face No. 12 Maryland at 4:30 p.m. Sunday.