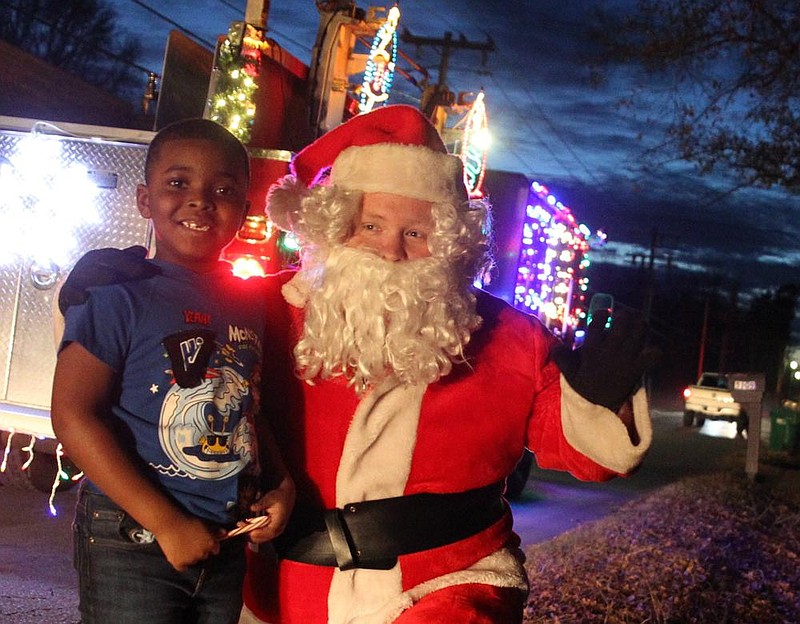 Six-year-old Nolan Parks of Pine Bluff gets a visit from Santa (Pine Bluff firefighter Austin Harris) during last year’s Holiday Santa Run when the Santa Fire Truck came to his Faucett Road neighborhood. The Holiday Santa Run will be held nightly Nov. 30 through Dec. 24 in various areas throughout the city. Due to covid-19 restrictions, this year, social distancing will be enforced and masks are required. (File photo)

The department will begin the Santa Run with a preview at 5:30 p.m. Sunday during the kickoff of the Community Prayer and Christmas Tree Lighting Ceremony at 601 Main Street Plaza.

Fire department personnel and Carrington Electric Co. of Pine Bluff decorated one of the reserve fire trucks with Christmas lights, and with assistance from Stereo Junction, a sound system was added to play Christmas music as the fire truck drives throughout the neighborhoods.

"The fire department, along with the city of Pine Bluff would like to give a big thank you to Carrington Electric who donated and installed the Christmas lights," said Fire Chief Shauwn Howell in a news release. "Pine Bluff Fire and Emergency Services are looking forward to sharing the Santa Fire Truck with the community."

Firefighters will be out each night from approximately 5-8 p.m. displaying the fire truck and wishing everyone a fire-safe Christmas holiday. As precautions against covid-19, social distancing and masks will be required.

The following schedule lists the dates and areas of the city where the firefighters plan to travel during the holidays. Emergency calls and/or inclement weather may cause the schedule to be adjusted, according to the release.

Dec. 19-23 -- Open dates will be used for make-up days due to inclement weather and emergency calls.