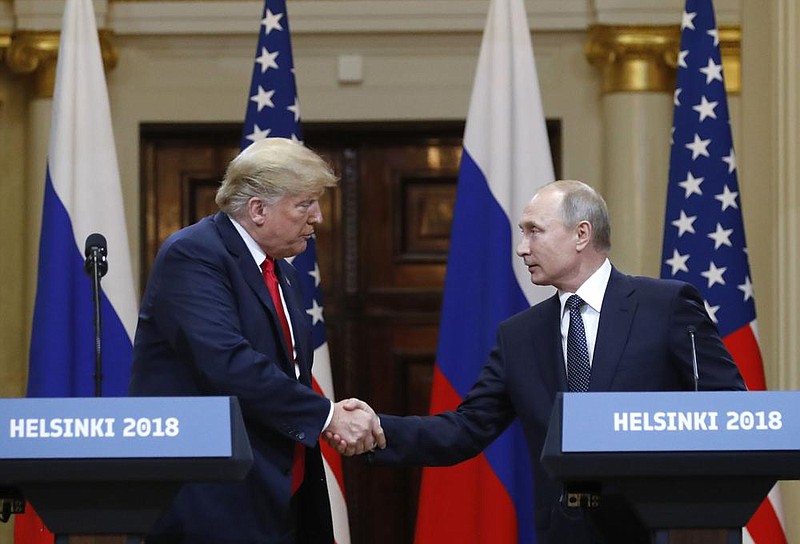 President Donald Trump greets Russian President Vladimir Putin at a news conference after their meeting in Helsinki in July 2018. Trump suggested a “Pakistani gentleman” could have stolen Democrats’ emails during the 2016 campaign despite his own intelligence agencies citing it as part of Moscow’s election interference. (AP/Alexander Zemlianichenko)

The House of Representatives quietly paid $850,000 this year to settle wrongful termination claims by five Pakistani American technology specialists, after a set of routine workplace allegations against them morphed into fodder for right-wing conspiracy theories amplified by President Donald Trump.

Together, the payments represent one of the largest known awards by the House to resolve discrimination or harassment claims, and are designed to shield Congress from potentially costly legal action.

But aides involved in the settlement, which has not previously been reported, said it was also an attempt to bring a close to a convoluted saga that led to one of the most durable -- and misleading -- story lines of the Trump era. The aides said its size reflected a bid to do right by a group of former employees who lost their jobs and endured harassment in part because of their Muslim faith and South Asian origins.

What started as a relatively ordinary House inquiry into procurement irregularities by Imran Awan, three members of his family and a friend, who had a bustling practice providing members of Congress with technology support, was twisted into lurid accusations of hacking government information.

In 2018, Trump stood next to President Vladimir Putin of Russia at a news conference in Helsinki, and implied that one of the employees involved in the House case -- a "Pakistani gentleman," he said -- could have been responsible for stealing emails of Democratic officials leaked during the 2016 campaign. His own intelligence agencies had concluded that the stolen emails were part of an election interference campaign ordered by Moscow.

"It is tragic and outrageous the way right-wing media and Republicans all the way up to President Trump attempted to destroy the lives of an immigrant Muslim American family based on scurrilous allegations," said Rep. Ted Deutch, D-Fla., who had employed Awan and is chairman of the Ethics Committee.

"Their names were smeared on cable TV, their children were harassed at school, and they genuinely feared for their lives," Deutch added. "The settlement is an acknowledgment of the wrong done to this family."

The case originated in 2016, when officials in the House, then controlled by Republicans, began investigating claims that the specialists had improperly accounted for purchases of equipment and bent employment rules as they worked part-time for the offices of dozens of Democratic lawmakers.

In the hands of the chamber's inspector general and later the Capitol Police, the investigation slowly expanded to include concerns that the workers had illicitly gained access to, transferred or removed government data and stolen equipment.

In early 2017, the House stripped their access to congressional servers, making it impossible for them to continue their work. One by one, the lawmakers terminated them.

But as the inspector general's findings were shared with Republican lawmakers and trickled into conservative media in early 2017, they began to take on a life of their own. The Daily Caller, which led the way, published allegations that the workers had hacked into congressional computer networks, and other right-wing pundits speculated that the group were Pakistani spies.

Trump, in addition to his comments in Helsinki, repeatedly amplified conspiracy theories about the investigation on Twitter, where he referred to a "Pakistani mystery man." At one point, he publicly urged the Justice Department not to let one of the workers "off the hook."

But in the summer of 2018, the department did just that, taking the unusual step of publicly exonerating Awan. The department concluded in a court filing that after interviewing dozens of witnesses, and reviewing a Democratic server and other electronic records, it had found "no evidence" that Awan illegally removed data, stole or destroyed House equipment, or improperly gained access to sensitive information.

The statement came during a sentencing hearing for an unrelated offense -- that Awan had lied about his primary residence on an application for a home-equity loan, for which he was sentenced by judge to one day of time served and a three-month supervised release.

House officials and the Capitol Police revisited their investigation of Awan and his colleagues after the Justice Department's findings became public. The review found that the original investigation had reached certain conclusions about misbehavior that were not necessarily supported by facts, but upheld the ban on their access to the House computer network, preventing their reinstatement, congressional aides said.

Awan's lawyers approached the House after Democrats took control of the chamber in 2019 to discuss a possible settlement. Many of the lawmakers who had employed him pushed their leaders to strike a deal.

The resulting agreement was signed by Rep. Zoe Lofgren of California, the chairwoman of the Administration Committee, in January and paid out this summer. It resolved claims brought by Awan and the other four staffers under the Federal Tort Claims Act that House officials behaved negligently in their second inquiry after the Justice Department found no evidence of illegal conduct.

The settlement also resolved claims that House officials inflicted emotional distress on the group, and that the initial investigation was motivated by the employees' religion, national origin, race, or political affiliation.

In a statement, Lofgren said that the employees had threatened to sue various House members, offices and other employees, "seeking millions of dollars in compensatory and punitive damages." She said the House decided to settle "due to the likelihood of an unfavorable and costly litigation outcome," although she asserted that based on the information it had at the time, the House had been right to revoke their network access.

Awan declined to comment on the settlement. Peter Romer-Friedman, one of the Awans' lawyers, said that they would "never forget the courage and kindness" of lawmakers who had stood by his clients.

Awan was born in Pakistan in 1980 and moved to Northern Virginia in 1997. While in college, he worked as an intern for a company that provided IT services to congressional offices. He was hired directly by the office of Rep. Robert Wexler of Florida after graduating and worked setting up email accounts and new equipment like phones and laptops for staff members.

Over the years, other Democratic members of Congress hired Awan to perform similar work under an arrangement that made him a "shared employee" and for which he was typically paid $20,000 each year per member of Congress. As the workload grew, Awan brought on two of his brothers, his wife and a friend to assist him, and they became shared employees as well. Together they eventually worked for more than 30 members of Congress.

Their employers included Rep. Debbie Wasserman Schultz of Florida and Rep. Cedric Richmond of Louisiana, who was recently named by President-elect Joe Biden to a top White House position. The connection to Wasserman Schultz, who was the chairwoman of the Democratic National Committee at the time of the 2016 email hack, is what prompted the theories seized on by Trump that Awan, not the Kremlin, was responsible.

House investigators found that Awan and his four co-workers violated certain administrative rules -- for example, working as a team in which they would provide services to offices that didn't technically employ them, and breaking up payments for equipment such as iPads into increments that were below $500, the point at which a purchase would trigger a more cumbersome procurement process.

But Joshua Rogin, Deutch's chief of staff, said in a declaration accompanying a separate defamation lawsuit brought by the Awans against the Daily Caller and others that he did not believe that the arrangements violated House rules and that he was unaware that the rules the five were accused of violating had been enforced against any other House employees.

"I understood this investigation to be both politically motivated and based on bias over their nationality, ethnicity and religion," he said in the declaration.

Conservative outlets have continued to spin out unsupported theories about Awan.

In January of 2019, Luke Rosiak, a reporter for the Daily Caller News Foundation who had written more than two dozen stories about Awan, published a book in which he reported that one or more of the family members had hacked congressional servers, stolen cellphones and laptops and sent equipment to government officials in Pakistan. The book also refers to Imran Awan as a "mole."

In an interview with the Epoch Times in July of that year, he referred to Awan as "basically an attempted murderer, an extortionist, a blackmail artist, a con man."

Awan and the family members and friend who worked with him on Capitol Hill are suing Rosiak, The Daily Caller and Salem Media Group, the owner of Rosiak's book publisher, Regnery, for defamation and unjust enrichment. The case is currently pending in court.

Matthew Lee, a lawyer for The Daily Caller, declined to comment on details of the litigation but called the plaintiffs' account of events "one-sided."