Is 5th time a charm in 'Predator' franchise? 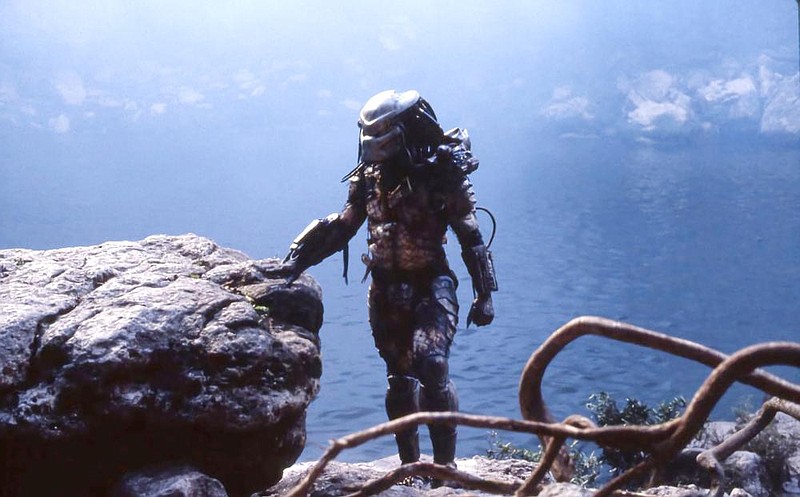 The original Predator, played by the 7-½-foot-2 Kevin Peter Hall, in the original “Predator” from 1987. Who would have suspected the film, dismissed by the Los Angeles Times as “arguably one of the emptiest, feeblest, most derivative scripts ever made as a major studio movie” would go on to spawn four sequels?

I can remember being excited in high school because, for the first time on the big screen, we were going to see xenomorphs from "Alien" go toe-to-toe with predators from ... well, "Predator."

And the concept looked so cool to an easily-impressed high school gal. An ancient pyramid in Antarctica? Two tough aliens fighting each other? Excellent. My friends and I spent weeks taking sides and debating which side would win.

None of us took into account the only winner from "Alien Vs Predator" would be Sanaa Lathan. And that's assuming she escaped Antarctica (I always believed she did).

I obviously wasn't around in 1979 when "Alien" released. Nor was I on the planet in 1987 when "Predator" hit theaters. Hell, I was only 3 months old when "Predator 2" came out in 1990. But over time, I've gone back and watched every film in each franchise.

"Alien" holds the record as the only horror movie I actually enjoy. I hate being scared. But I love science fiction, so I tolerate wetting myself in "Alien." Because it's a good movie. By comparison, none of the "Predator" movies is scary.

I guess we'll have to see if the fifth installment of the franchise will be. Deadline reported that the film is officially in the works. Here's more from the news site:

"20th Century Studios has engaged 10 Cloverfield Lane director Dan Trachtenberg to direct the fifth installment in the Predator series. The script is being written by Patrick Aison, whose producer-writer credits include the series Kingdom, Jack Ryan and Treadstone. They are keeping the plot line under wraps for the moment, but I'm told it won't swing back to the developments in the most recent film."

It's that last sentence that captured most of my attention. If the story doesn't build on "The Predator" (2018), then "Predator 5" is going to have one thing in common with the other three sequels, pretending the last film didn't exist.

I'm surprised another "Predator" film is being made so soon. The last one only made about $160 million. I figured once Disney bought 20th Century Fox, the Predator and Alien franchises were going into cold storage. The latest films did little to inspire future financial success. And yet, Ridley Scott seems convinced his franchise will live on. And now it seems the rival alien franchise will survive as well.

What I would really like to see is for James Cameron to stop working with the stupid blue aliens he created and come back to take over one of these franchises. Or return to another Arnold Schwarzenegger series, preferably one with killer cyborgs and time travel. I won't hold my breath.

But getting back to the series ignoring its previous installments, I can think of an example where a film franchise did that, and it was a disaster.

First, let's look at Highlander. The first movie is a cult classic, mostly because of Sean Connery and Queen. "Highlander II: The Quickening" attempted to retcon some parts of the original story and flopped. "Highlander III: The Sorcerer" pretended the second film didn't exist and performed terribly.

"Highlander: Endgame" (much more disappointing than its "Avengers" counterpart) tried to merge the television series and movies and bombed at the box office. And finally, "Highlander: The Source" (which premiered on Syfy Channel) was supposed to kickstart a new trilogy, while seemingly disregarding the others, and was so bad, Syfy scrapped the plans.

Each new release that came out wanted to kickstart the franchise again and mostly ignore the previous installments. They were all very bad movies I inflicted upon myself in high school with a couple of friends.

Each of the "Predator" sequels seems to have done the same thing. They just haven't been as terrible as the "Highlander" continuations.

"Predator 2" had no Arnold (but did introduce a xenomorph skull, which I'll give it points for) and didn't take place in the jungle. "Predators" also had no Arnold and took place on an entirely different planet. It was the sequel I enjoyed the most. And "The Predator" had someone screaming "Get to the choppers!" but it wasn't Arnold. And it wasn't funny.

Sometimes it's hard for movie studios to accept that a movie was lightning in a bottle, and it doesn't need any sequels. That was certainly the case of "The Crow" and "The Matrix." Yet each film spawned unnecessary and disappointing continuations.

"Predator" was clearly lightning in a jungle. I don't know if the secret sauce was Arnold or the '80s or the B-movie status. It sure as hell wasn't Shane Black. But each time 20th Century Fox has tried to build on it, it failed. Maybe we didn't need to know where the predators come from or what they do. Perhaps it was enough for Arnold to run through the jungle fighting and eventually killing a monster from another world.

Maybe Predator 5 will turn out to be good. In which case, I'll happily eat my words. But looking at each of the lackluster sequels that came before it, I've got my doubts.

At least the "Alien" franchise has managed to churn out a few good sequels. I actually like "Aliens" better than the original. And despite the mixed reviews, I actually really liked "Prometheus" and "Alien: Covenant."

I'm on the fence about "Alien Vs Predator." I still like the concept, but I hate that the movie was hampered by a PG-13 rating (even if that allowed me to see it in high school). If a rated-R director's cut was released today, I'd probably call it a worthy successor to "Predator." Its direct sequel? Not so much.

The bottom line is, I'd like to see a Predator 5 that ties all previous sequels together. I hate unfinished endings, and it's hard to dangle more than the endings for "Predators" and "The Predator."

It's just a shame neither is likely to get any closure. I want to know what happened to Adrien Brody and Alice Braga! Maybe there's a comic book that continues their story or something.

Good luck, 20th Century Studios. You're going to need it (and Arnold).