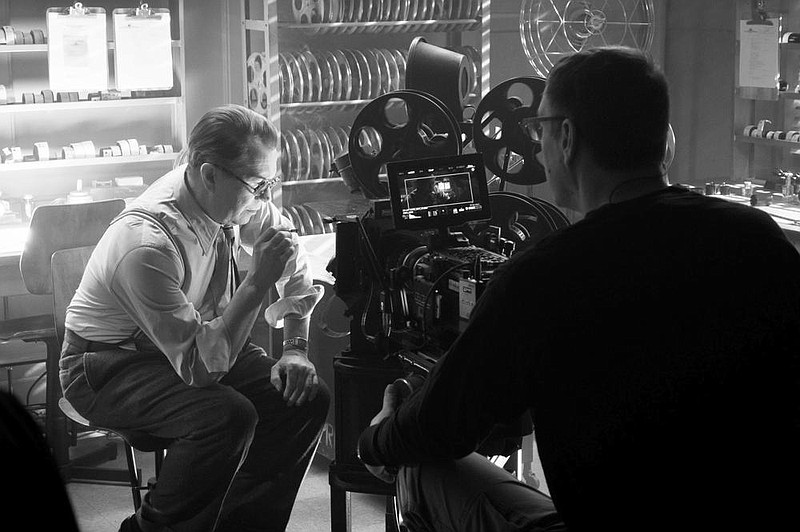 Writer and alleged genius Herman J. Mankiewicz (Gary Oldman) works in the editing room on “Citizen Kane” with an editor played by Erik Messerschmidt, who served as the actual cinematographer on “Mank,” David Fincher’s deep dive into the making of that classic movie. (Netflix)

"Mank," a years-in-the-making passion project of David Fincher based on a script by his father, Jack, is a movie made for critics, cinephiles and deep-dive film historians. A whirligig retelling of how Herman Mankiewicz came to write the groundbreaking 1941 film "Citizen Kane," filmed in velvety black-and-white and studded with fetishistic details of Hollywood's Golden Age at its most silky and coyly subversive, "Mank" is designed to send its intended audience aloft on a cloud of nostalgia, albeit with pangs of remorse for what we've lost.

Which makes the film's disappointments all the more painful, and confounding. On paper, "Mank" promises equal measures of penetrating insight and pure delight: In the 1920s and 1930s, Mankiewicz -- played to perfection by Gary Oldman -- was a successful, if self-destructive, screenwriter in Hollywood, beckoning former Algonquin Round Tablers from the East Coast with promises of sun, fun and easy money. ("Millions are to be grabbed out here, and your only competition is idiots," he famously telegrammed Ben Hecht.) When the film opens, it's 1940, when a radio wunderkind named Orson Welles has received carte blanche from RKO to make whatever movie he wants and hires Mank, as he's known, to create a script.

In homage to "Citizen Kane," Jack Fincher wrote "Mank" in the same nonlinear, elliptical style (compared to Mexican jumping beans by John Houseman in this film), bouncing from the bed where Mank writes his first draft while recovering from a car wreck, back to when befriends the powerful publisher William Randolph Hearst (Charles Dance) and Hearst's much younger companion, Marion Davies (Amanda Seyfried). We get scenes of Mank's writers' room at Paramount, with name-droppy appearances by Charles Lederer, Charles MacArthur and S.J. Perelman. There's a wonderful sequence featuring Louis B. Mayer (Arliss Howard) walking through the corridors of MGM before demanding a pay cut from his employees, and equally scrumptious set pieces at Hearst's estate San Simeon, where Davies compares notes about Hitler and Lowell Thomas with Irving Thalberg and Norma Shearer (Ferdinand Kingsley, Jessie Cohen) and, later, attends an extravagant costume party dressed as a be-plumed trainer.

Through it all, Mank keeps up a steady patter of arch commentary, delivering punny witticisms with the practiced sarcasm of the resolutely un-star-struck. That is, when he isn't stumbling and mumbling in a drunken shambles: Although one could argue that as high-functioning an alcoholic as Mankiewicz must have been able to hold his liquor, Oldman and Fincher have chosen to portray his binges with W.C. Fields-like excess.

One of the most revolutionary things about "Citizen Kane" was cinematographer Gregg Toland's use of light, shadow and deep focus; here, Erik Messerschmidt does his version with crisp, meticulously staged images that he inexplicably blows out with distractingly bright backlights. Like Quentin Tarantino's "Once Upon a Time ... in Hollywood," Fincher's enterprise luxuriates in the signifiers of the era, whether in the form of fake cigarette burns once used to cue reel changes or "process" shots of cars moving in front of an obviously ersatz background.

It must have been a ball to do. But it's questionable whether any of the fuss will appeal to anyone but the most dedicated "Citizen Kane" fans. Even with Trent Reznor and Atticus Ross' propulsive piano-and-drum score, the movie often feels too talky and tendentious by half: This isn't inside-baseball as much as the foam core under the last layer of the inside of the baseball. "Mank" gleefully examines the disreputable underside of old-school Hollywood and its minions: the spit under the polish, the dreck that undergirds the dreams. But it's weighed down by windy expository passages that stop the film in its tracks, whether they're introducing once-famous figures or explaining the California gubernatorial race in which Hearst and Mayer collaborated to defeat socialist author Upton Sinclair.

It was Mank's outrage over that collusion that inspired him to go after Hearst in "Citizen Kane" (a particularly prescient moment occurs when Mank confronts a budding director about helping Mayer produce a scurrilous anti-Sinclair newsreel, predicting the decades of fake news to come).

But that also meant he had to betray Davies, with whom he develops a touching friendship over the course of the film. "Mank's" best scenes belong to Seyfried, who gives her character warmth, life, intelligence and humor: She's a figure of stunning, ethereal beauty, often looking as though she's lit from within. But she's also supremely self-aware, and probably smarter than any of the men posing and posturing around her. Seyfried's the beating heart of a movie that is constantly teetering on the edge of pastiche, feeling more play-acted than fully inhabited.

Mank's political outrage wasn't confined to the 1934 governor's race; he's increasingly resentful of the screenwriter's lot in Hollywood, where the profession is routinely disrespected (and where Mankiewicz is helping spearhead a union). "Mank's" final scenes address the ongoing controversy around who properly deserves credit for "Citizen Kane." It's another angels-on-the-head-of-a-pin argument that keeps obsessives up at night. But it's also a question that Mank accidentally answers in favor of the auteur whose vision brought his brilliant words to life.

"I built him a watertight narrative and a suggested destination," he says upon delivering a 327-page first draft. "Where he takes it, that's his job."