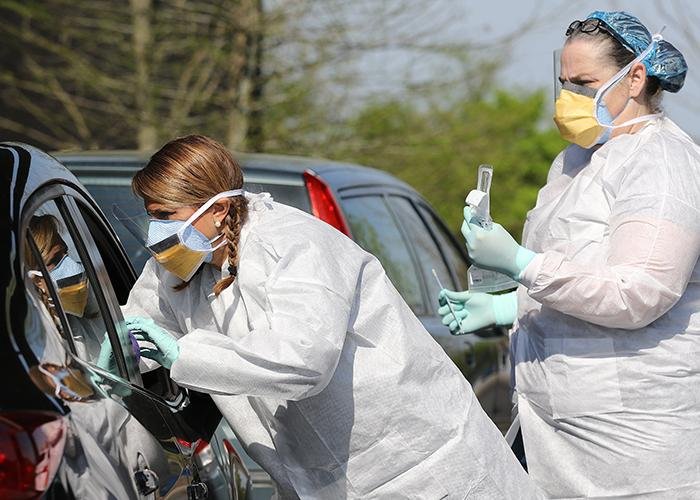 Nurses Mandy Stuckey (left) and Tonya Green conduct a coronavirus screening in April at a drive-thru site at New Life Church in North Little Rock. The site, and one at Ouachita Baptist Universityin Arkadelphia, is a partnership between two Arkansas companies. (Arkansas Democrat-Gazette/Thomas Metthe)

Arkansas reported 2,348 new covid-19 cases on Thanksgiving, a single-day record that a chief state health official described as worrisome as residents head into the height of the holiday season.

Hospitalizations declined for the first time this week, snapping a four-day streak of daily records set for the number of patients being treated in medical facilities, including a high of 1,028 hospitalizations reported Wednesday.

The Arkansas Department of Health's tally of hospitalizations fell by 25, to 1,003, Thursday.

Likewise, the number of patients on ventilators fell by 22, to 169, from 191 the previous day.

In a statement posted on Twitter, Gov. Asa Hutchinson suggested that the high level of testing seen the day before the holiday would decline later in the week.

"I suspect that high level of testing will slow until Monday. Cases are high but a small reduction in hospitalizations is an improvement," Hutchinson wrote.

An additional 11 deaths were reported Thursday. All but one were among confirmed covid-19 patients, according to the Department of Health. A total of 2,436 Arkansans have now died as a result of covid-19.

Since March, when the state's first case of the virus was identified, a total of 152,625 infections have been reported in the Natural State.

The count of active cases in the state rose Thursday, though not to the same level as the active-case peak seen last weekend. According to the Department of Health, active cases Thursday increased by 574, to 17,588.

Health officials reported that an additional 1,380 individuals classified as confirmed covid-19 cases and 382 classified as probable cases had recovered as of Thursday.

The numbers reported Thursday "are worrisome for what it might mean for after Thanksgiving," state epidemiologist Dr. Jennifer Dillaha said in a phone interview.

Health officials have urged people to avoid travel and take precautions to prevent transmission of the virus when holding holiday gatherings.

Dillaha said "time will tell" whether people traveling and holding gatherings are doing those activities in such a way as to minimize transmission.

According to Dillaha, some portion of the individuals represented in the pool of more than 2,300 new cases reported Thursday will develop severe cases of the disease, and many of those people will end up in a hospital.

The new cases will put additional pressure on the state's health-care system, already strained because of the recent surge in hospitalizations.

Health Department spokeswoman Meg Mirivel said 68 adult beds in intensive care units were available on Thursday -- a decrease from the 75 beds available the day before. The state has a capacity of 1,139 ICU beds, according to the Department of Health.

Slightly more than 34% of the occupied ICU beds were occupied by covid-19 patients, she said.

The staffing of medical facilities -- rather than available bed space -- is the part of the health-care system more susceptible to strain amid the covid-19 outbreak, according to Dillaha.

"It's not hard to convert a regular hospital bed into a ICU bed," she said. "It's the staffing that you need to take care of the patient that is stretched."

Dillaha said that because other states are also experiencing record-high cases and pressure on their hospitals, "they're needing more nurses also, so all the states in the surrounding area are recruiting from each other to get nurses to come work in their state."

"Many nurses are experiencing burnout. They can't take time off to get rest and kind of personal renewal that they need to keep going," Dillaha added. "And it's very difficult for those people who are putting themselves on the line to stay on the line for extended periods of time."

Of the confirmed cases reported Thursday, 44 were in correctional facilities.

Active cases in Pulaski County declined by 23, to 1,843, according to the Department of Health.

Additionally, one student entered quarantine, according to the district. No additional covid-19 reports will be released until Sunday, the district said in its Wednesday update.

According to the Department of Health's report released Wednesday on virus cases in educational settings, school districts in Springdale and Bentonville reported the highest and second-highest number of confirmed and probable active cases, with 134 and 69 active cases, respectively.

Earlier this week, the school districts in Springdale and Little Rock announced modifications to their operations because of covid-19.

Springdale pivoted to virtual learning for the period between Thanksgiving break and Dec. 7, and the Little Rock School District announced that instruction would take place online every Friday beginning in January.

Among colleges and universities, the University of Arkansas, Fayetteville led in terms of active cases, with 141, and a cumulative total of 2,620 infections, according to the Department of Health report.

Fifty-nine active cases were reported at Harding University in Searcy and 41 at the University of Arkansas for Medical Sciences in Little Rock. 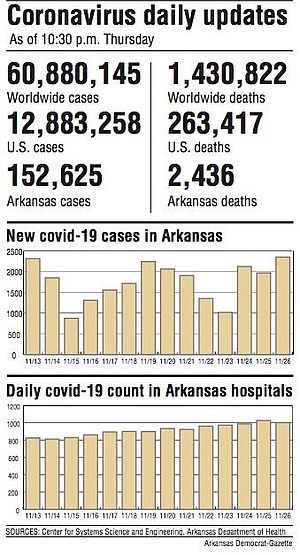