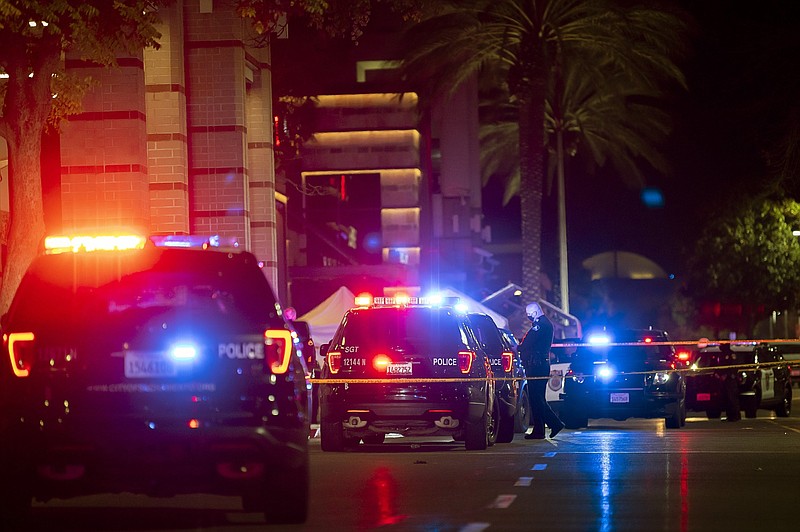 Police stand outside Arden Fair Mall after a shooting that left one person dead and another critically injured, Friday, Nov. 27, 2020, in Sacramento, Calif. The mall was evacuated in the midst of Black Friday, one of the busiest shopping days. Police later said the suspect had fled and there was no active threat to the mall. (Paul Kitagaki Jr./The Sacramento Bee via AP)

SACRAMENTO, Calif. — Police are looking for a gunman who shot and killed two teens at a Northern California mall in the midst of Black Friday, sending shoppers running for safety, authorities said.

Arden Fair Mall in Sacramento was evacuated shortly after 6 p.m. when shots were fired near one of the mall's entrances, police spokesman Karl Chan said.

A 19-year-old man was found dead at the mall and a 17-year-old boy was found critically wounded at a bank outside of the mall. He was taken to the hospital and succumbed to his injuries several hours later, police told the Sacramento Bee on Saturday.

Workers at the mall said they heard up to a dozen shots.

"Heard a couple of shots go off, didn't really think anything of it," Antwon Martinez said. "And more and more kept going off, so everyone started running toward our back room. ... Everyone just started running."

He said customers and workers evacuated through the corridors and stairways in the back of the mall.

The coronavirus pandemic kept crowds thinner than usual on Black Friday, one of the busiest shopping days of the year, the newspaper reported.

Chan said the shooting appeared to be a targeted and isolated attack, though he didn't disclose the gunman's motive. Police said they were looking for a suspect in his 20s.

Other details of the shooting weren't immediately released but Chan urged people who may have witnessed the shooting to come forward and said the mall's security camera footage will be examined by homicide detectives.

"We do know that the mall does have a pretty robust surveillance footage," he said.

Gun assaults and homicides have surged in the California capital, as well as in Los Angeles and other cities. About 40 homicides have been reported this year.

"We are deeply concerned by the increase in gun violence in Sacramento and other cities during the pandemic, and have supported increasing our efforts to reach young people at risk," Mayor Darrell Steinberg tweeted. "A gun is never the answer."