‘Calling election unfair does not make it so,’ says Pennsylvania case decision by Compiled by Democrat-Gazette Staff From Wire Reports | November 28, 2020 at 4:42 a.m. 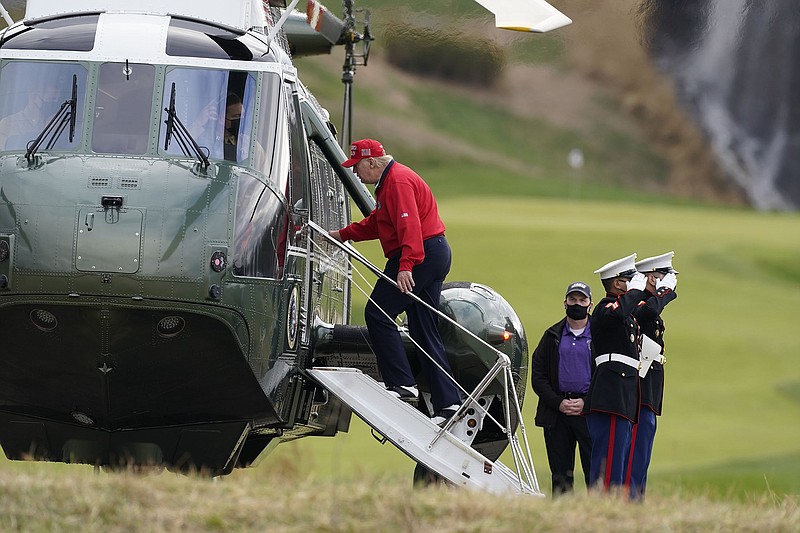 President Donald Trump, who continued Friday on Twitter to attack Democratic cities with large Black populations as the source of “massive voter fraud,” boards Marine One after playing golf at Trump National Golf Club in Sterling, Va. He flew to Camp David for the weekend. More photos at arkansasonline.com/1128count/. (AP/Alex Brandon)

The campaign, which has gained no substantial traction in its effort to undo the results in a number of states since Election Day, said that it would take the case to the U.S. Supreme Court -- despite another judicial assessment that the "campaign's claims have no merit."

"Free, fair elections are the lifeblood of our democracy. Charges of unfairness are serious. But calling an election unfair does not make it so.

"Charges require specific allegations and then proof. We have neither here," 3rd U.S. Circuit Court of Appeals Judge Stephanos Bibas, a Trump appointee, wrote for the three-judge panel, all appointed by Republican presidents.

The case had been argued last week in a lower court by Trump lawyer Rudy Giuliani, who insisted during five hours of oral arguments that the election had been marred by widespread fraud in Pennsylvania. However, Giuliani failed to offer any tangible proof.

U.S. District Judge Matthew Brann, another Republican appointee, had said the campaign's error-filled complaint, "like Frankenstein's Monster, has been haphazardly stitched together," and denied Giuliani the right to amend it for a second time.

And the appeals court called any revisions "futile." Chief Judge D. Brooks Smith and Judge Michael Chagares were on the panel with Bibas, a former University of Pennsylvania law professor. Trump's sister, Judge Maryanne Trump Barry, sat on the court for 20 years, retiring in 2019.

"Voters, not lawyers, choose the president. Ballots, not briefs, decide elections," Bibas said in the opinion.

"The ballots here are governed by Pennsylvania election law," the opinion said. "No federal law requires poll watchers or specifies where they must live or how close they may stand when votes are counted. Nor does federal law govern whether to count ballots with minor state-law defects or let voters cure those defects."

The court also denied the Trump campaign's request to stop the state from certifying its results, a demand that Bibas called "breathtaking."

In fact, Pennsylvania officials had announced Tuesday that they had certified their vote count for President-elect Joe Biden, who defeated Trump by more than 81,000 votes in the state.

Official results show Biden defeating Trump by more than 6.1 million votes nationally -- more than 80 million to just under 74 million -- and leading in the Electoral College, 306 to 232.

All 50 states must certify their results before the Electoral College meets Dec. 14, and any challenge must be resolved by Dec. 8.

The combined rulings from Brann and the appeals court are the highest-profile courtroom defeats for Trump since the Nov. 3 election. Suits filed by the campaign and its GOP allies have failed in Michigan, Georgia, Nevada and Arizona as judges declined to toss out millions of votes based on claims tied to a vast and implausible conspiracy theory about corrupt Democratic election workers.

Trump has said he hopes the Supreme Court will intervene in the race as it did in 2000, when its decision to stop the recount in Florida gave the election to Republican George W. Bush. On Nov. 5, as the vote count continued, Trump posted a tweet saying the "U.S. Supreme Court should decide!"

Ever since, Trump and his surrogates have attacked the election as flawed and filed a flurry of lawsuits to try to block the results in six battleground states. But they've found little sympathy from judges, nearly all of whom dismissed their complaints about the security of mail-in ballots, which millions of people used to vote from home during the covid-19 pandemic.

Trump perhaps hopes a Supreme Court he helped steer toward a conservative 6-3 majority would be more open to his pleas, especially since the high court upheld Pennsylvania's decision to accept mail-in ballots through Nov. 6 by only a 4-4 vote last month. Since then, Trump nominee Amy Coney Barrett has joined the court.

"The activist judicial machinery in Pennsylvania continues to cover up the allegations of massive fraud," Trump lawyer Jenna Ellis tweeted after Friday's ruling. "On to SCOTUS!"

But most legal experts doubt the high court will take up a case where the evidence is lacking and which wouldn't change the race. Biden would still win the presidency without Pennsylvania's 20 electoral votes.

In the case at hand, the Trump campaign asked to disenfranchise the state's 6.8 million voters or at least "cherry-pick" the 1.5 million who voted by mail in Philadelphia, Pittsburgh and other Democratic-leaning areas, the appeals court said.

"One might expect that when seeking such a startling outcome, a plaintiff would come formidably armed with compelling legal arguments and factual proof of rampant corruption," Brann, a member of the conservative Federalist Society, wrote in his scathing ruling Nov. 21. "That has not happened."

A separate Republican challenge that reached the Pennsylvania Supreme Court this week seeks to stop the state from further certifying any races on the ballot. Democratic Gov. Tom Wolf's administration is fighting that effort, saying it would prevent the state's Legislature and congressional delegation from being seated in the coming weeks.

On Twitter on Friday, Trump continued to attack Detroit, Atlanta and other Democratic cities with large Black populations as the source of "massive voter fraud." And he claimed, without evidence, that a Pennsylvania poll watcher had uncovered computer memory drives that "gave Biden 50,000 votes" apiece.

Trump played golf at his club in Virginia on Friday before traveling on the Marine One helicopter to Camp David.

Any emergency request on the Pennsylvania case would go to Supreme Court Justice Samuel Alito Jr., who is the justice designated to handle such matters from the 3rd Circuit.

On Nov. 5, Alito on his own ordered county officials in Pennsylvania to separate mail-in ballots received after Election Day. That is the subject of a separate lawsuit already at the high court, which challenges the authority of the Pennsylvania Supreme Court to extend the period for receiving ballots.

But the number of such ballots are not enough to influence the outcome of Pennsylvania's vote. And since Alito's order, in which he said he was turning the matter over to the entire court, there has been no action. It has even given the state's Democrats additional time -- until Monday -- to file a brief in the case.

Trump's declaration after the death of Justice Ruth Bader Ginsburg that a replacement had to be approved hurriedly in case the Supreme Court was deadlocked in postelection litigation has put the justices in a delicate political position. Ginsburg's replacement, Barrett, was pushed by Democrats in her confirmation hearings to recuse herself from hearing any lawsuits generated by the election, and she declined to make a declaration either way.

The sharply worded decision by the panel of 3rd Circuit judges -- appointed by Republican presidents and written by a Trump appointee -- did not bode well for the Trump campaign's chances at the Supreme Court, some legal observers said.

Edward Whelan, a conservative legal commentator at the National Review who is sympathetic to the Trump administration, repeated a tweet from after the campaign's first loss in federal court in Pennsylvania: "It's over." He added: "Ditto for any filing in the Supreme Court."

Justin Levitt, a professor at Loyola Law School in Los Angeles who tracks voting-rights litigation, said there is little chance the case would be taken up by the high court.

"At this point, this is zombie litigation -- but it's not one of those zombies anybody is afraid of. It's just slowly rotting in the corner," Levitt said. "It's not that the Supreme Court doesn't take strange cases. But they only take cases where the facts or the law -- and usually both -- present some sort of credible legal question, and that's not even close to true here."

​​​​​Information for this article was contributed by Maryclaire Dale of The Associated Press; by Erik Larson of Bloomberg News; and by Jon Swaine, Michelle Ye Hee Lee, Robert Barnes, Josh Dawsey, Elise Viebeck and Aaron Schaffer of The Washington Post. 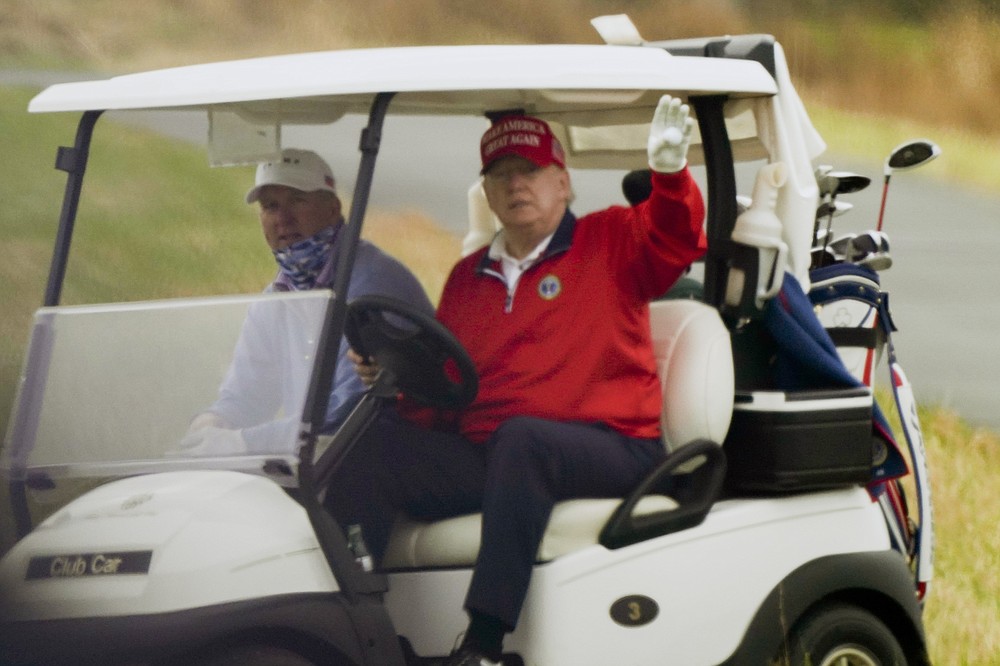 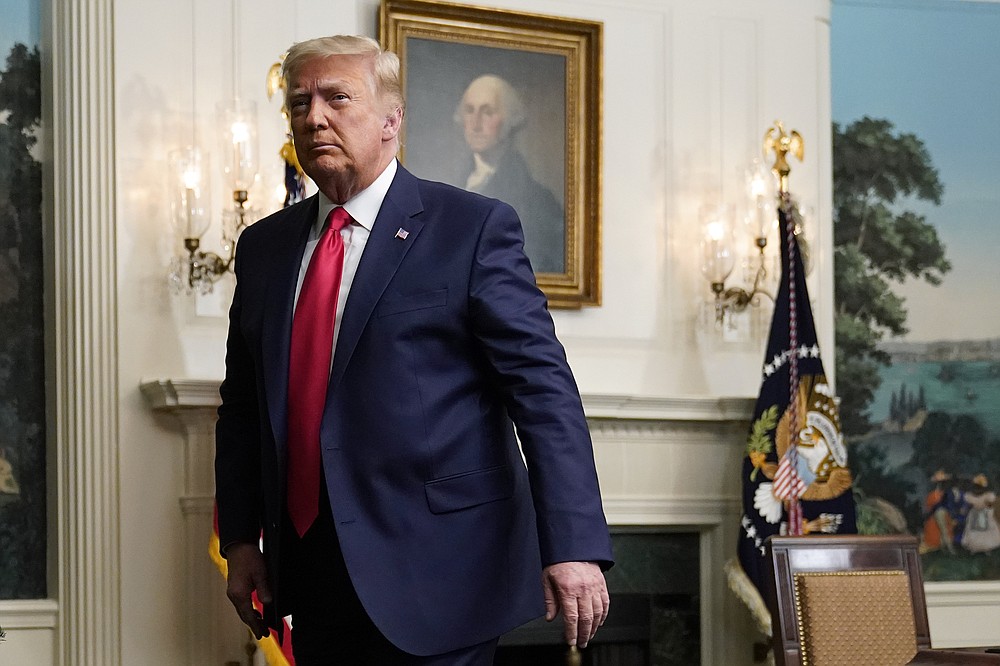 President Donald Trump departs after participating in a video teleconference call with members of the military on Thanksgiving, Thursday, Nov. 26, 2020, at the White House in Washington. (AP Photo/Patrick Semansky) 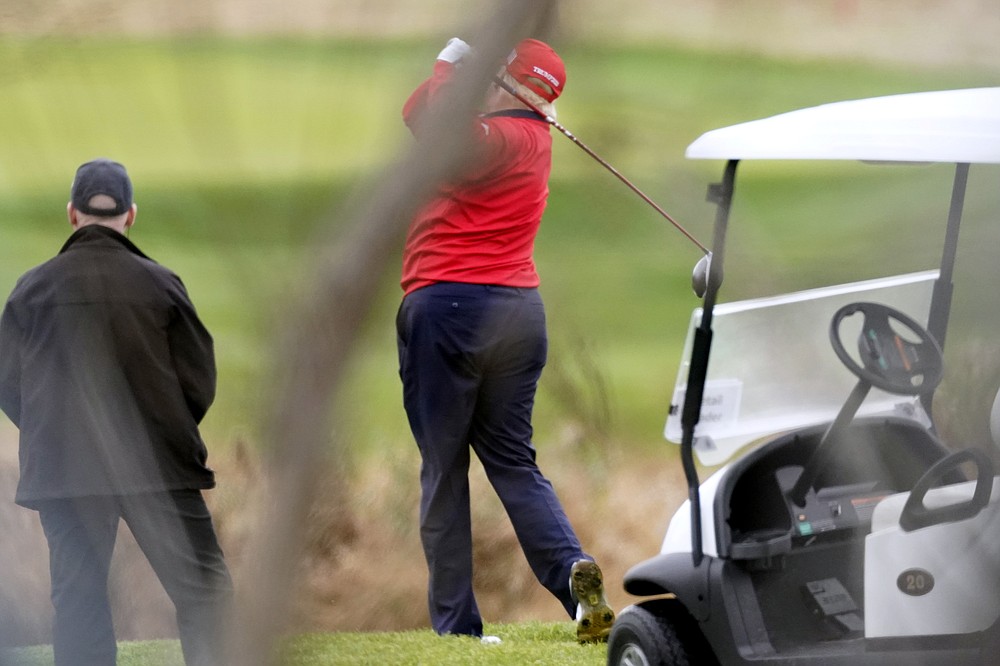 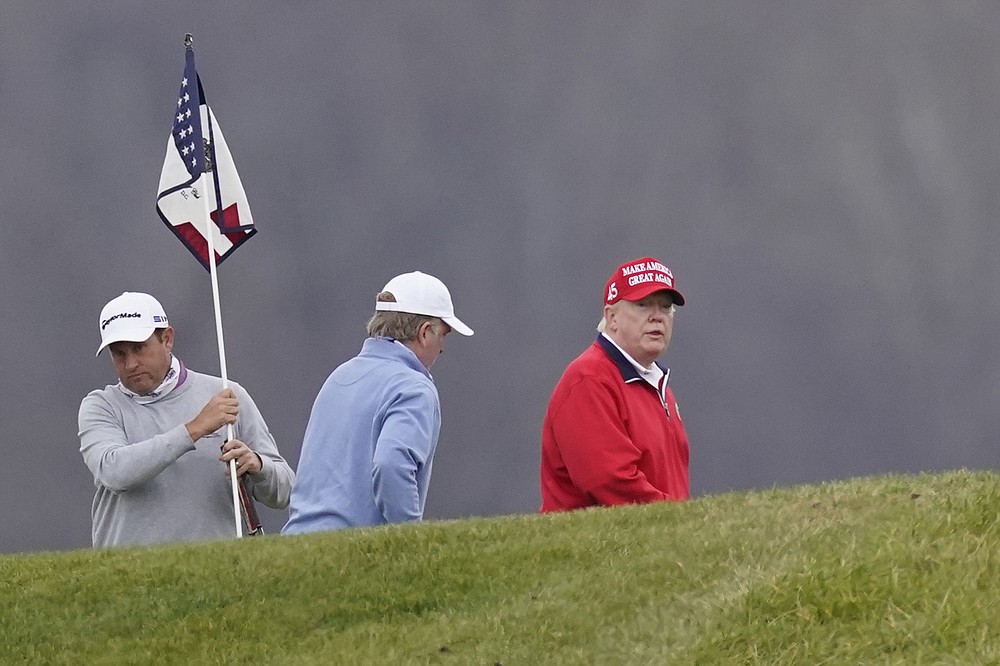 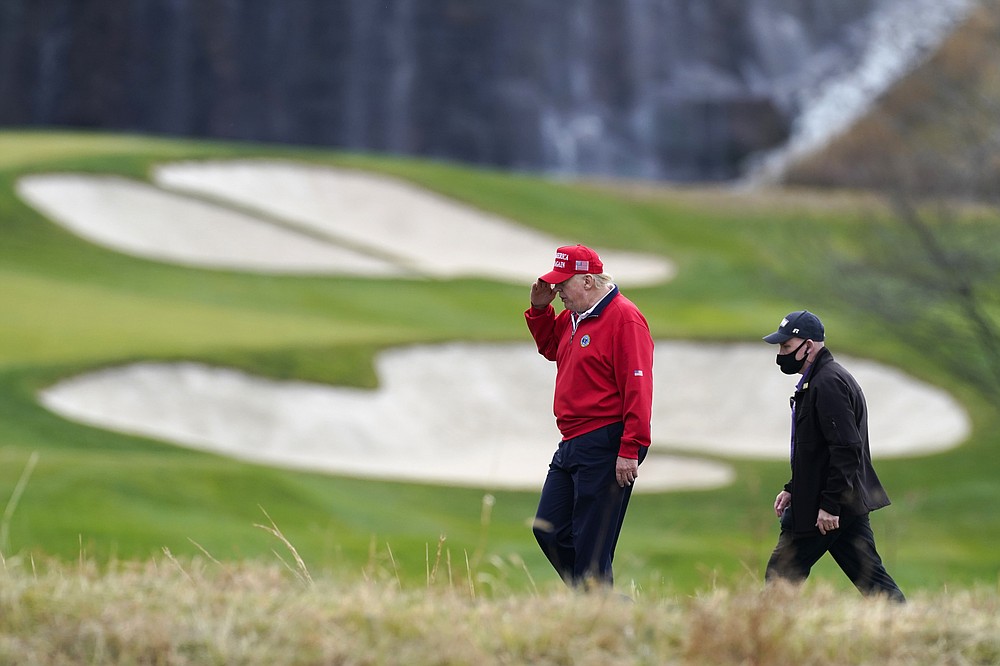