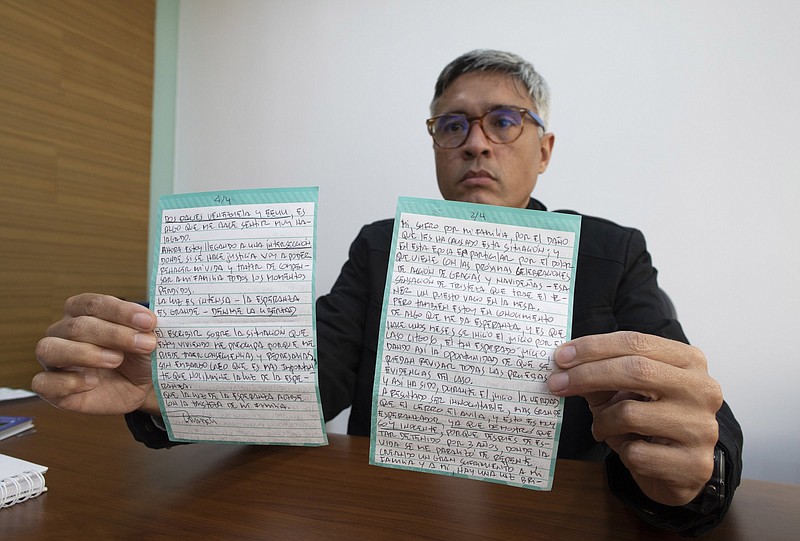 Jesus Loreto, an attorney representing Tomeu Vadell, one of six U.S. oil executives jailed in Venezuela, earlier this week in Caracas shows a letter written by Vadell in which Vadell pleads for his freedom. (AP/Ariana Cubillos)

CARACAS, Venezuela -- Families lose hope for the quick release of six American oil executives -- who were detained in Venezuela for three years -- as a judge finds them all guilty for an alleged corruption scheme and quickly sentences them to prison.

Attorneys and relatives of the so-called Citgo 6 said the men were wrongly convicted, and the defense lawyers vowed to appeal Thursday's verdicts.

Alirio Rafael Zambrano, whose two brothers were among the defendants, said they were "undeniably innocent" and victims of "judicial terrorism." No evidence presented in the case supports a guilty conviction, he said.

"We, the family, are heartbroken to be separated even further from our loved ones," Zambrano said by phone from New Jersey. "We pray that the leaders of our nation step forward and continue to fight unceasingly for their freedom and human rights."

Attorney María Alejandra Poleo, who helped represent three of the men, said the case was "void of evidence." "Of course, the defense will appeal the decision," she said.

The Citgo 6 are employees of Houston-based Citgo refining company, which is owned by Venezuela's state oil company, PDVSA. They had been lured to Venezuela three years ago for a business meeting and were arrested on corruption charges.

Their arrest launched a purge of PDVSA by President Nicolás Maduro's government at a time when relations between Caracas and Washington were crumbling as Venezuela plummeted into economic and social crisis.

Five of the men were sentenced to prison terms of 8 years and 10 months, while one received a 13-year sentence. Defense attorney Jesus Loreto said the five with lesser terms could be released on parole in a couple of years.

Venezuela's Supreme Tribunal of Justice announced the verdicts and sentences but offered no other comment.

One of the men, Tomeu Vadell, had said in a letter written in a Caracas jail and provided to The Associated Press before the verdict that he hoped for a fair trial so he could walk free with his name cleared and go home to his family in the United States.

In a statement after the verdict, Vadell's family said: "We are sad to see that justice did not prevail today. But we are hopeful that the truth will set our loved one, Tomeu, free and home to us soon."

Despite his circumstances, Vadell expressed hopefulness.

"During the trial, the truth has proven undeniable," Vadell said in the four-page, handwritten letter. "It proves that I am innocent."

"I'm now reaching an intersection where if justice is done, I will be able to rebuild my life and try to compensate my family for all the lost moments," he added. "The light is intense -- the hope is great -- give me freedom."

It was the first time any of the six had spoken publicly since being arrested and charged in the purported corruption scheme. He has been held at a feared Caracas jail called El Helicoide.

They were also charged with embezzlement stemming from a never-executed proposal to refinance some $4 billion in Citgo bonds by offering a 50% stake in the company as collateral. Maduro at the time accused them of "treason."

They all pleaded innocent.

Former New Mexico Gov. Bill Richardson, who has negotiated the release of other Americans held by hostile governments, traveled to Caracas in July and met with Maduro.

Days later, two of the prisoners -- Cárdenas and Toledo -- were freed from jail and put in house detention. Two weeks later, the long-delayed trial began.

Richardson said conversations with the Venezuelan government continue despite his meeting with Maduro being "a little stormy." He said he believes there is an opening tied to President-elect Joe Biden and a desire by Maduro to improve relations with Washington.

"I think the Venezuelans have been straight with me, but more progress needs to be made," Richardson said before the verdict. "My hope is to have something positive by Christmas."

It is not clear what approach Biden will take toward Maduro. Trump aggressively pressed to remove Maduro through sweeping financial sanctions and the U.S. Justice Department has indicted him as a narcoterrorist, offering a $15 million reward for his arrest.

Vadell's letter steered clear of politics. But with encouragement from his family, he broke his silence, taking a risk relatives said was necessary.

​​​​​Information for this article was contributed by Joshua Goodman of The Associated Press. 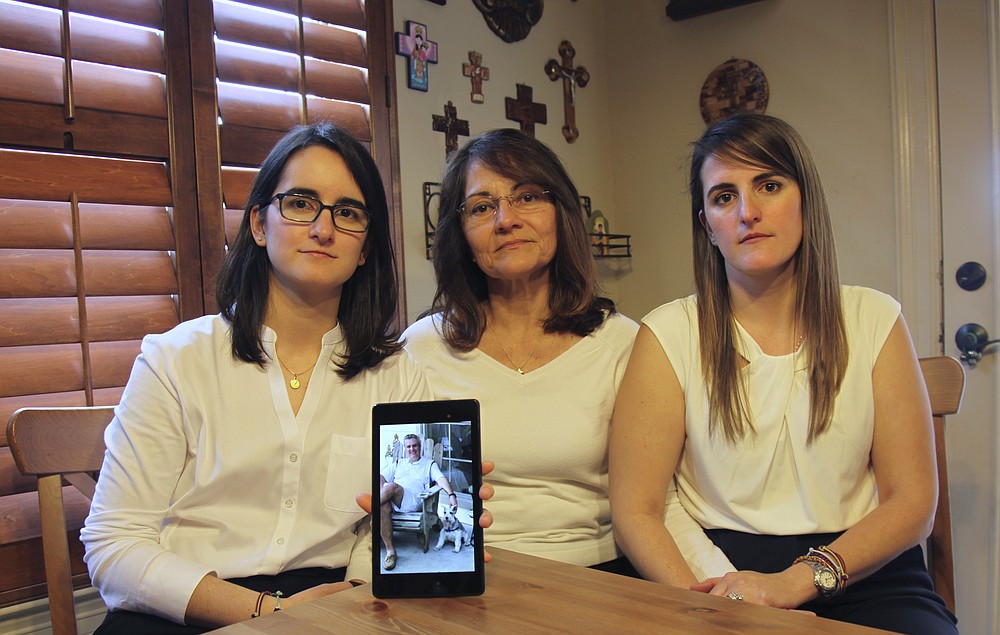 FILE - In this Feb. 15, 2019 file photo, Dennysse Vadell sits between her daughters Veronica, right, and Cristina holding a digital photograph of father and husband Tomeu who is currently jailed in Venezuela, in Katy, Texas. Tomeu Vadell, who is one of six U.S. oil executive jailed for three years in Venezuela, says in a letter from prison provided to The Associated Press on Tuesday, Nov. 24, 2020, that it’s especially painful to be separated during the Thanksgiving season from from his wife, three adult children and a newborn grandson he’s never held. (AP Photo/John L Mone, File)
ADVERTISEMENT