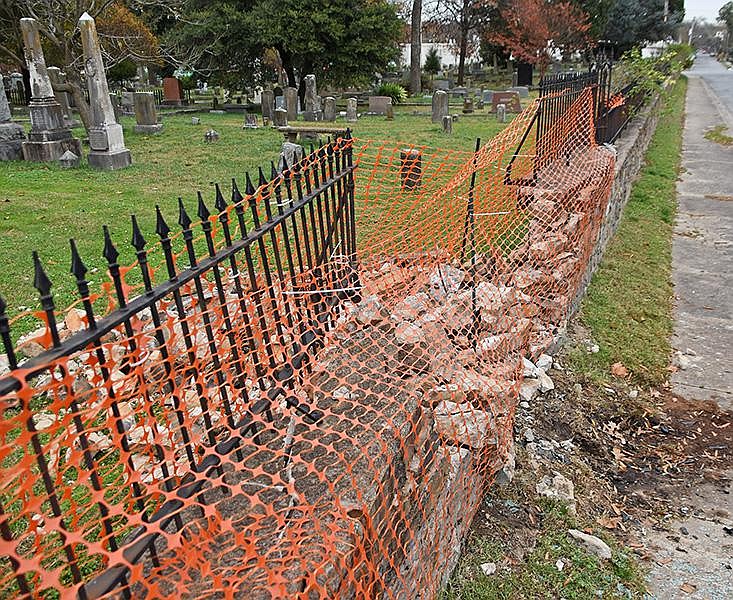 The board of the historic Mount Holly Cemetery in Little Rock is raising money to repair a stone wall around the premises after a car crashed into it earlier this week, destroying a 20-foot stretch.

The Little Rock Police Department contacted the Mount Holly Cemetery Association, which manages the upkeep of the property, informing it of the crash about 6:30 p.m. Monday, said Anne Orsi, an association board member.

The crash involved a vehicle traveling at a high speed that slammed into the cemetery wall on 13thStreet, Orsi said.

A passenger in the car was seriously injured, and the driver fled on foot, she said.

Orsi said the damage is "substantial." No gravestones or other monuments were damaged, she said.

The cost to repair the stone structure is expected to be in the thousands of dollars, and the cemetery board is concerned about being able to pay for it since its finances have decreased this year because of the pandemic, Orsi said.

"It will be at least several thousand dollars," she said. "We don't really have any idea at this point, and with it being a historic wall, we have to put it back so it looks the same way as it has always looked. We will have to do it so it does not look like an obvious patch."

The Mount Holly Cemetery Association relies on donations to make repairs to monuments and for upkeep of the grounds. Major fundraising events, such as an annual spring picnic, were canceled because of the pandemic.

Mount Holly Cemetery is at 1200 Broadway, just south of Interstate 630, in Little Rock.

Established in 1843, Mount Holly is historically notable for the number of well-known Arkansans buried there, including governors, U.S. senators, Pulitzer Prize winners and Supreme Court justices.

The association has had to deal with cemetery damage before.

In 2016, vandals damaged nearly a dozen monuments and the cemetery's flags, according to the Encyclopedia of Arkansas. The damage totaled more than $290,000.

"We have had a chronic problem with people running into our wall," said Matilda Wynne Buchanan, another board member. "We will have to dip into our endowment fund if we have a cash flow issue, but the question is how are we going to pay ourselves back?"