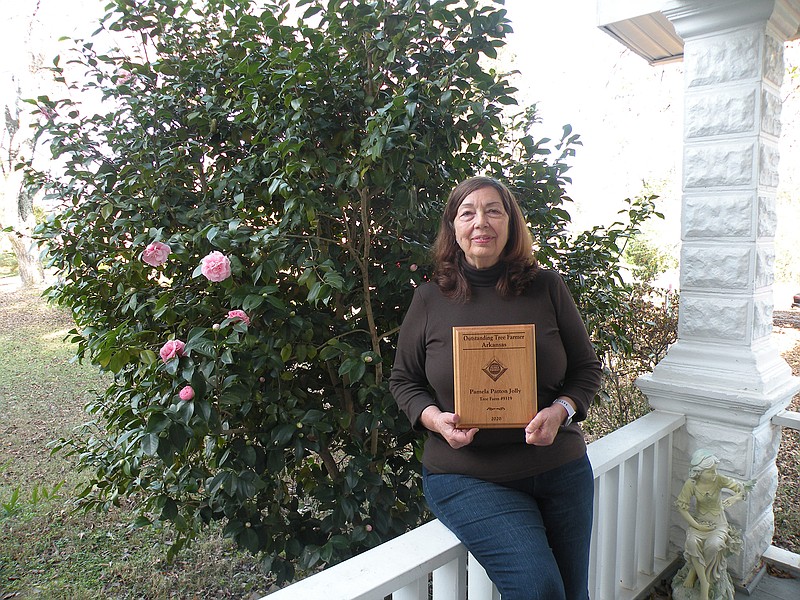 Pamela Patton Jolly of Wooster is the 2020 Arkansas Outstanding Tree Farmer. She is shown here at her home in Wooster with the plaque she received from the Arkansas Tree Farm Program, which is administered by the Arkansas Forestry Association. Jolly’s 223-acre farm is in Yell County near Danville.

Pamela Patton Jolly is the 2020 Outstanding Tree Farmer of Arkansas.

“As the Arkansas program administrator, I not only get to work with such remarkable landowners but also get to know them and call them friends,” Johnson said. “Pam is an exemplary steward of her land. She is also a caring individual who helps others learn the benefits of sustainable forestry — she talks the talk and walks the walk when it comes to tree farms.

“Pam is not the first woman to win this award, although it is rare,” Johnson added.

Jolly’s 223-acre farm — the Patton Tree Farm — is 8 miles west of Danville in Yell County. Jolly said the acreage, which is described by the AFA as a forest, includes 139 acres of hardwoods, “mostly oak and hickory, and 40 acres of loblolly pine.”

“I named the farm after my parents, the late James and Helen Patton of Wooster,” Jolly said. “My dad operated a 460-acre farm on Cadron Creek, and I always enjoyed going to the farm with him as I was growing up.”

Jolly said she wanted to honor her dad for instilling in her “land-ownership values and land-conservation responsibility of equity, livelihood and wildlife.

“The real estate agent showed me several farms, but when we came to this one, I knew it was the one,” Jolly said. “The forestry service had planted it, and it had been professionally looked after,” she said.

Jolly and her husband, Jim Jolly, have made improvements to the land. They have built roads onto the property and have had several gates installed to control access to the property. They have had two low-water crossings built across a creek to access parts of the timberland and to prevent soil erosion. Fire lines have been constructed around the parameter of the property to serve as a wildfire control and fire breaks for a prescribed burn that will be used in coming years.

Pam Jolly has also had a commercial pine-thinning on the 40-acre pine plantation and 181 acres of herbicide injection to remove the hardwood and pine stand’s low quality and invasive species. She said she plans to conduct a second thinning on the pine and is continually monitoring the hardwood stand for the right time to thin it.

Jeff Berry, a forester with Green Bay Packaging in Morrilton, nominated Jolly for the award.

In his nomination, Berry said, in part, “Pam’s management strategies and goals align perfectly with the American Tree Farm System’s core values. Wood, water, wildlife and recreation are a big part of her long-term management goals.

Jolly said there is an abundance of wildlife on her tree farm — “deer, raccoon, bobcat, coyote … some unwanted wildlife, too,” she said, laughing.

“I hire people to trap beavers and otters, as well as feral hogs. I have cameras on the property that show these animals,” Jolly said.

“I have met a multitude of people since I bought this farm,” she said. “I have gotten to know them. … They have been very helpful.

“I want this to be a legacy farm and leave it to my children and grandchildren. It has been wonderful during this time of COVID-19. We can’t go to the movies, we can’t eat out, but we can go to the farm to hunt and fish, ride the side-by-side and look for arrowheads.”

Jolly, who is a certified public accountant, has attended several seminars, workshops and conferences and has presented a program on timber taxes and hosted a tour on her tree farm. She is not only a member of the Arkansas Forestry Association, but also of Women Owning Woodlands, a program sponsored in Arkansas by the University of Arkansas. Division of Agriculture, Cooperative Extension Service.

When Jolly is not spending time at the Patton Tree Farm, she enjoys the fellowship of members of the Cadron Post Chapter of the National Society Daughters of the American Revolution. She also collects antique dolls and has studied Hebrew.

The Jollys have four adult children and several grandchildren and great-grandchildren. Pam Jolly is a graduate of Greenbrier High School and the University of Central Arkansas in Conway, where she received a Master of Business Administration degree in 1992. She worked at UCA as a CPA and director of audits, as well as serving as interim director of financial aid for one year. She retired as director of community education after serving 23 years at her alma mater.