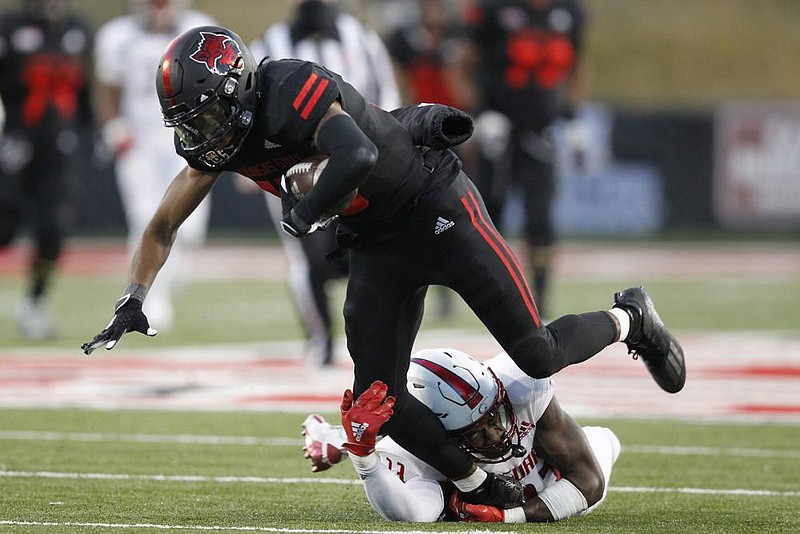 Wide receiver Jalen Tolbert torched the Red Wolves with 10 catches for 252 yards and 3 touchdowns, including the go-ahead score in the fourth quarter, to help the Jaguars beat ASU 38-31 in front of a crowd of 4,013 at Centennial Bank Stadium.

All three of Tolbert's touchdowns came in the second half for South Alabama (4-6, 3-4 Sun Belt), which maintained its grip on second place in the West Division standings while putting a stop to a four-game losing streak.

Prior to the game, South Alabama Coach Steve Campbell said his team needed to score points to finally close out a game. Tolbert and an opportunistic defense obliged their coach.

Quarterback Desmond Trotter threw for 242 yards and two touchdowns before leaving the game late in the third quarter for the Jaguars. His backup, Tanner McGee, came on and finished with 145 yards passing and two scores for South Alabama, which handed ASU (3-7, 1-6) its fifth consecutive loss.

"Obviously disappointed with the loss," ASU Coach Blake Anderson said. "As you can see, the guys are still playing hard. It'd be real easy for them to quit, to give in, and they just haven't done that. I'm proud of how they're playing in terms of energy and how they work.

"But we can't quite make the plays we need to on the field. Whether it's strength, whether it's power, inexperience, technique ... we've got issues from one side to the other. We missed opportunities to make plays, and [South Alabama] made plays. It was very similar to last week."

ASU had a chance to pull out a victory a week ago against Texas State but turned the ball over on downs on its final possession. The Red Wolves were faced with the same situation Saturday.

Trailing by seven, the Red Wolves drove to the South Alabama 11 with less than 20 seconds left in the game. They had three cracks at the end zone before quarterback Layne Hatcher was sacked by defensive end Jeremiah Littles on the final play.

Quarterback Logan Bonner completed 11 of 16 passes for 183 yards and 4 touchdowns for ASU, which had a 494-486 advantage in total yards. Wide receiver Jonathan Adams caught 9 passes for 138 yards and 2 scores, while wideout Jeff Foreman had 5 catches for 111 yards. Running back Jamal Jones added 93 yards rushing on 19 carries.

But ASU had trouble making game-defining plays, converting just 2 of 5 on fourth downs while South Alabama converted 3 of 3.

"We've just got to make plays," Bonner said. "We've got to be able to execute when we have to, just have to be better at it. Everybody is disappointed and frustrated, though.

"This one hurts, but we've got to move on to [Louisiana-Monroe]. We've got to come back [today] ready to work."

After forcing South Alabama to punt on its initial series, the Red Wolves drove 69 yards and jumped out front 7-0 on Bonner's 3-yard touchdown pass to wide receiver Brandon Bowling with 8:50 left in the first quarter.

South Alabama hit back with a 10-play, 72-yard march on its next possession, highlighted by a high-arcing 41-yard connection from Trotter to Tolbert that put the Jaguars at the Red Wolves' 12. Trotter dove into the end zone on the next play to tie it up at 7-7.

The Jaguars put together another methodical series the next time they had the ball.

Trotter ended an 8-play, 64-yard drive with a 26-yard touchdown pass to wide receiver Kawaan Baker with 11:23 remaining in the second quarter. Baker had caught a 14-yard pass moments earlier along the left sideline to give South Alabama a first down before Trotter found him behind the Red Wolves' defense on the right side one snap later for the score.

The Jaguars had a chance to extend their lead to 10 late in the period, but Diego Guajardo pushed his 43-yard field goal attempt wide right.

The Red Wolves took over after the missed kick and went 75 yards, with Bonner capping the drive with a 25-yard touchdown strike to Bowling with 1:09 to go in the quarter. ASU would then get the ball back with 31 ticks showing and quickly powered downfield -- thanks mostly to a 43-yard pass from Hatcher to Foreman -- to take a 17-14 lead into halftime after kicker Blake Grupe nailed a 35-yard field goal.

ASU pushed its lead to 24-14 in the third quarter on Bonner's 14-yard scoring throw to Adams, but South Alabama responded through Tolbert. The junior hauled in a 42-yard touchdown from Trotter with 6:39 left in the period and caught his 37-yard score from McGee more than six minutes later to put the Jaguars on top 28-24.

ASU went ahead 31-28 on Adams' 3-yard touchdown catch early in the fourth quarter before Tolbert's decisive 51-yard touchdown catch put the Jaguars in control. South Alabama stopped ASU on fourth down on the ensuing possession, which resulted in a 30-yard field goal from Guajardo.

The Red Wolves came up short on the resulting march, something that Anderson said his team has done far too often this season.

"We've got to gain the confidence and the experience to make plays when we need to," he said. "I love the fact that we moved it down the field and gave ourselves a chance to win or at least tie it up late. But even with that being said, we were close and close doesn't get it." 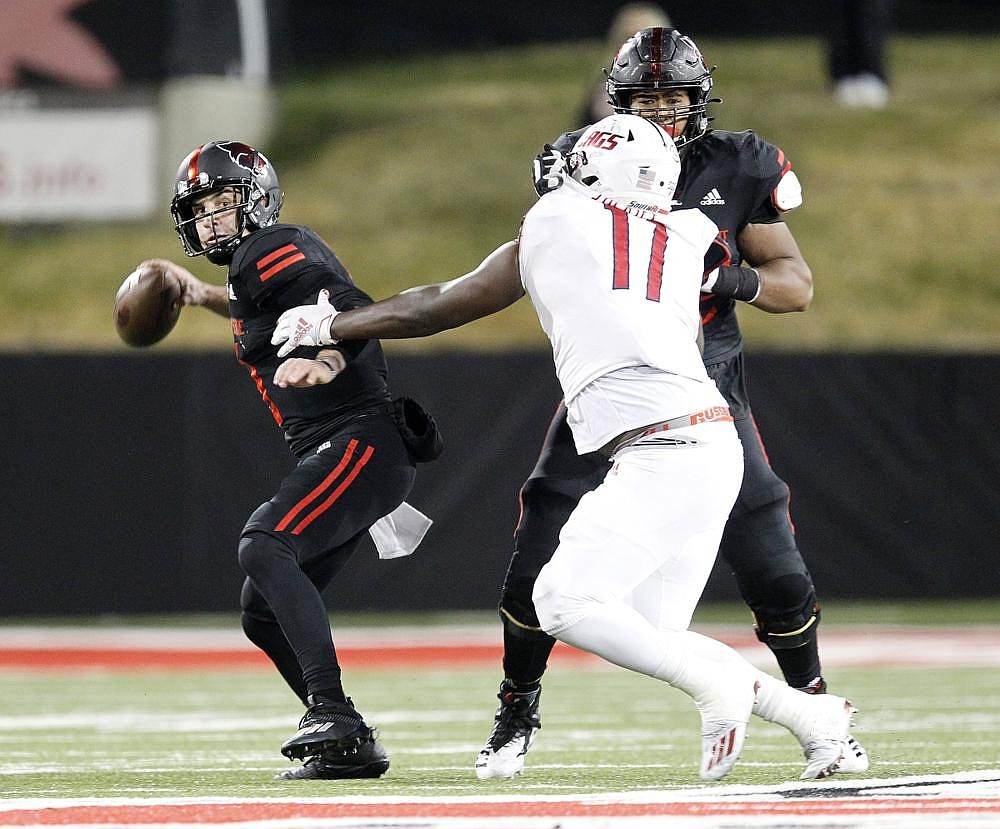 Arkansas State quarterback Layne Hatcher tries to get off a pass while being pressured by South Alabama’s Jamie Sheriff during the Red Wolves’ loss to the Jaguars on Saturday in Jonesboro. More photos available at arkansasonline.com/1129asusa. (Arkansas Democrat-Gazette/Thomas Metthe) 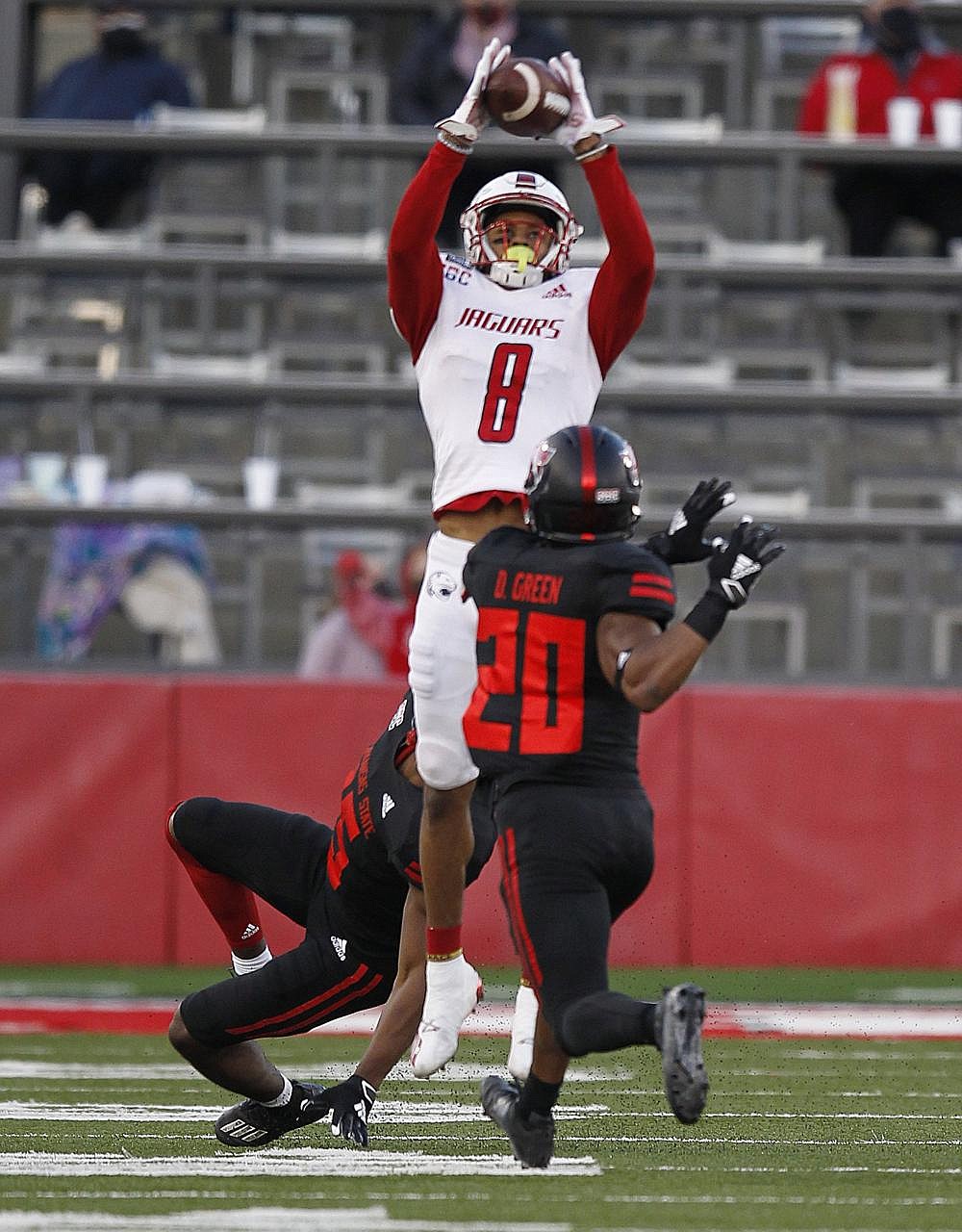