She couldn't stand him — but he made her laugh 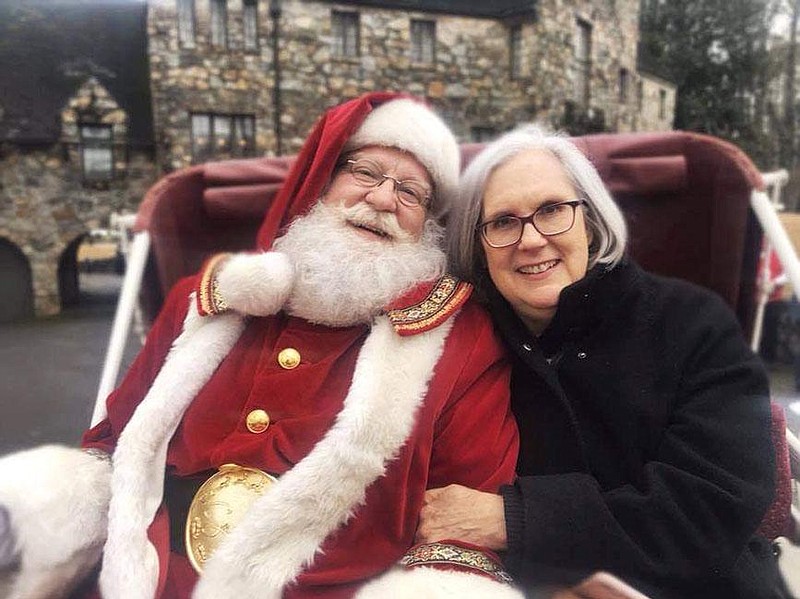 Kathy and Stacy Peters live in Little Rock and for a few weeks every year, Stacy becomes “Santa Pete” and Kathy takes on a supporting role. “I tell people, we’ve been married 45 years and it’s been 42 of the happiest years of my life,” Stacy quips. “Really, we’ve been blessed.” (Special to the Democrat-Gazette)

Stacy was a senior at Camden Fairview High School in 1972 when he first saw Kathy, then a freshman at Harding College in Searcy.

"I went up there for one of those weekend deals where they invite seniors to tour the campus," Stacy says. "I had noticed Kathy because she was just striking."

He started classes at Harding in the fall and, to his pleasant surprise, found that they had biology class together.

Kathy hadn't noticed Stacy during his visit, but he caught her attention immediately in class.

Kathy listened as the professor called the roll so she would know who he was.

"I wanted to dislike him by name," she says. "I went back to my dorm that night and I told my roommate, my friend, that there was this guy in my biology class named Stacy Peters and I could not stand him."

An entire year went by, and Kathy was named co-director of Harding's spring show. Stacy decided to audition for the position of host.

"Kathy was the one choosing the host," he says.

Fortunately for him, he had found a way to charm her in later classes.

"He had kind of made me laugh by that point in time. I had kind of gotten past the 'couldn't stand him,'" she says. "But I never dreamed in a million years that I would date him."

After a rehearsal one night, Stacy offered to give Kathy a ride back to the dorm. They stopped for Cokes and before he dropped her off he surprised her with a question.

"This was the big old movie reels, you know, and a student would go in the afternoon before the movie was going to show and screen the movie," Stacy says. "Anytime somebody said a cuss word, he would put a little mark in the movie reel so that when he sees this mark he would know that here in a minute they cuss, and he could turn the sound down right when they said the bad word."

He and Kathy had a good laugh about the censorship that night.

"We went on a date and then a few weeks later we went on another one, but it was the next semester before we actually started dating," he says.

They were together in a secluded part of Harding's campus when he proposed.

They exchanged their vows on Aug. 2, 1975, at a small church in Lake Village. Stacy's father officiated the ceremony and his brother was his best man. Kathy's friend was her maid of honor.

They went to Six Flags Over Texas on their honeymoon.

Stacy was raised by a strict, fundamental minister.

Before they were engaged, Kathy made sure they could agree on Christmas traditions.

"She said, 'There's something that we need to talk about.' She said, 'My children are going to believe in Santa Claus. Are you going to be OK with that?'" Stacy says. "Of course, I would agree to anything at that point."

Stacy and Kathy, who live in Little Rock, have three children -- Katie Mitchell and Ike Peters, both of Little Rock, and Sam Peters of Dallas. They have seven grandchildren and another on the way.

Their children were grown by the time Stacy became "Santa Pete," growing out his beard and donning a red velvet suit sewn for him by Kathy.

His initial goal was to provide Christmas cheer to the families at their church, but soon he was getting requests to make appearances at businesses and homes across the state.

They both had covid-19 earlier this fall, and both were hospitalized for a time. Kathy had a harder time with recovery than Stacy did, but both are feeling better now.

Santa Pete is not doing as many group appearances this year because of the pandemic, but he is still scheduling some events with some safety guidelines in place.

Kathy doesn't accompany him on those outings, but he appreciates knowing that she's usually at home waiting when he's done.

"I tell people, we've been married 45 years and it's been 42 of the happiest years of my life," Stacy says. "Really, we've been blessed." 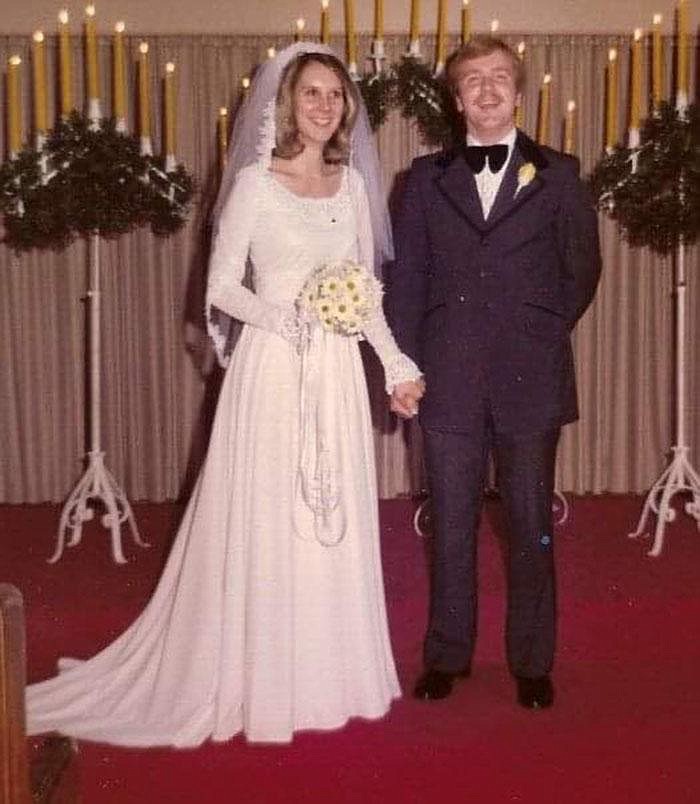 Kathy McKinney and Stacy Peters were married on Aug. 2, 1975. Kathy wasn’t a fan of Stacy’s in the beginning. “I just couldn’t stand him,” she says. (Special to the Democrat-Gazette) 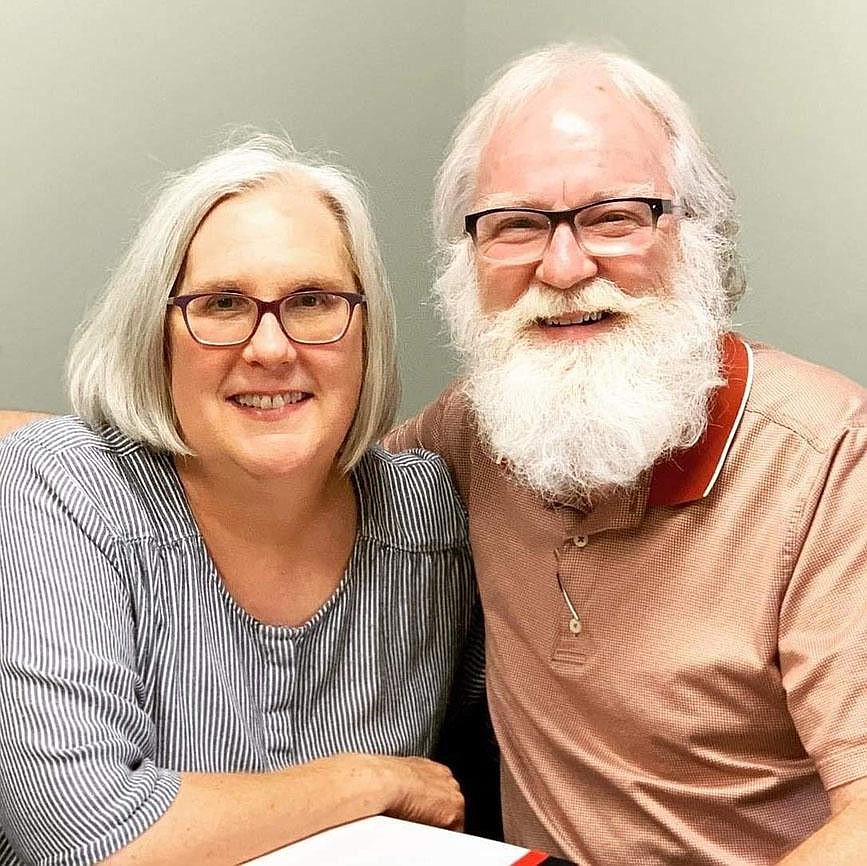 Kathy and Stacy Peters live in Little Rock and for a few weeks every year, Stacy becomes “Santa Pete” and Kathy takes on a supporting role. “I tell people, we’ve been married 45 years and it’s been 42 of the happiest years of my life,” Stacy quips. “Really, we’ve been blessed.” (Special to the Democrat-Gazette)
More News

She says: “I just remember thinking he was so obnoxious.”

He says: “I was standing with my best friend and I nudged him and said, ‘Check out the girl in the green dress.’”

She says: “I spent the morning crying because that’s what I did when I was stressed, so I decided not to wear my contacts. Without them I’m blind, so I walked down the aisle as nearsighted as could be and I couldn’t tell who all was there.”

He says: “When I was in high school I worked in Dairy Queen. My boss from Illinois came all the way to Lake Village, Ark., to attend my wedding. I was just surprised to see someone had traveled that far.”

She says: “Have fun and laugh every day.”

He says: “Have good friends. We’ve had the closest best people as friends in our lifetime. They’ve helped us be better people and better parents.”