Take it slowly in Rush

The historic town of Rush sprang up on the banks of a Buffalo River tributary. The small settlement is a ghost town these days. by Cary Jenkins | November 29, 2020 at 2:03 a.m. 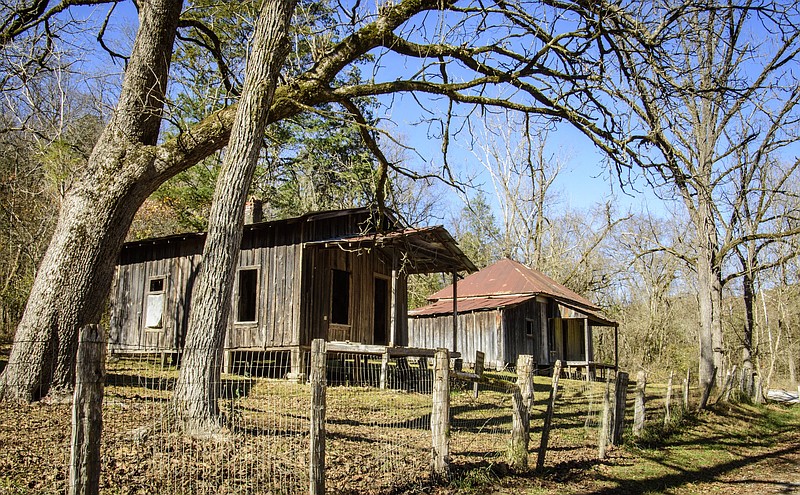 The Washhouse with the gabled roof (left) and the Bundy House with the hip roof were built about 1899 and have board and batten siding. According to the National Register of Historic Places Nomination form, the Washhouse was built in a rougher style while the Bundy house would have been “a fine dwelling in its day.” (Arkansas Democrat-Gazette/Cary Jenkins)

A few time- and weather-worn structures, foundations and walls are all that is left of Rush near the National Buffalo River in Marion County. The town grew up along Rush Creek when zinc was discovered in the area in 1885 and mines were dug into the mountainside.

The remnants of the thriving boomtown are now protected in the Historic Rush District with interpretive signs for visitors to learn about the area's history.

There are four houses and a general store overlooking the creek as you enter the district. Doors and windows are missing but it does give a chance to peer inside — from behind a fence — to see inside the structures.

Farther down is a stone smelter, a blacksmith shop, store foundations, large concrete piers from the Morning Star Mill and a long stone wall that once fronted a hotel and store.

The district is on the National River of Historic Places and the nomination form — prepared by Suzanne D. Rogers in 1985 — gives detailed information about what is now called a ghost town.

According to the form, there wasn't a community before zinc was discovered, but it developed as the mining industry in the district developed. Houses and smaller commercial buildings were built by local craftsmen using local wood from area sawmills using vertical boards with little interior support. Many were built on rock piers.

Later, says the form, horizontal siding was added to many of the buildings and painted. This can still be seen today, with traces of yellow, green, red and white paint visible on the houses and store. Roofs were shingled but later were replaced with tin.

Zinc was mined in the area from about 1880 to 1940. The site is significant for several reasons, according to the nomination, including that the district "portrays the story of the zinc mining industry in the Ozarks. ..."

It says that the standing buildings and structures are the last visible remains of the early north Arkansas mineral period and that with the ruins represent complete mining facilities and community design.

Whether one is a history buff or just likes the idea of visiting a ghost town, Rush is worth a visit. The historic district is off Arkansas 14. A sign marks the turn on to Marion County Road 6035. There is a place to pull over to stop and view the row of houses, and farther down the road, there is a place to park and walk the trails to view other significant sites. Most all are marked with signs telling about the ruins along with photos of what they looked like.

To view the National Register of Historic Places nomination form, which has a detailed history about the district, area mining and the structures, visit arkansaspreservation.com. The National Park Service also has historical information about the district here: bit.ly/3lNPafm.